A SEA SNAIL WITH ANTLERS...AND PAWS! 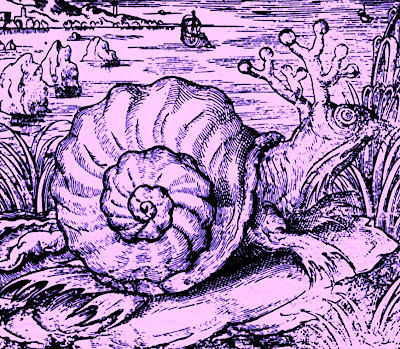 
Just when you think that the world, particularly the cryptozoological world, couldn't possibly get any stranger...

Roll up, roll up, ladies and gentlemen – I am proud to present before you, all the way from the Sarmatian Sea, the one and only giant monster sea snail with antlers, and paws!

Citing as his source of information the twentieth volume of Cosmography - which had been authored by one of his contemporaries, André de Thévet (1516-1590), a French Franciscan priest who was also a celebrated writer, explorer, and cosmographer - Paré reported that the Sarmatian or Eastern Germanic Sea (both are early names for the Baltic Sea) is home to a truly monstrous species of sea snail.

As thick as a wine cask, this singular and very sizeable creature is instantly distinguished from all other such molluscs by virtue of its pair of deer-like antlers. These decidedly unsnail-like accoutrements are borne upon the upper region of its head, and at the tip of each branch on each antler is a small, round, lustrous bulb resembling a fine pearl. By contrast, this snail's eyes, which in less exotic gastropods can be found at the tips of a pair of optic tentacles, are laterally sited on its head, just like those of many vertebrates, and glow brightly like candles. 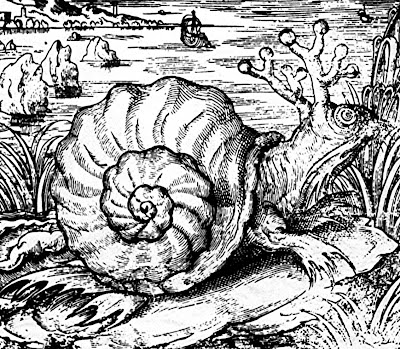 Paré's tale of a very strange snail! Has a creature like this ever truly inhabited the Baltic Sea?

Equally unexpected was Paré's claim that this very odd creature sports a roundish nose reminiscent of a cat's, complete with whisker-like hair all around it, plus a wide slit-like mouth beneath which hangs a fleshy projection of hideous appearance.

And as if antlers and a feline nose are not sufficiently bizarre characteristics for a sea snail (or, indeed, any other type of snail) to boast, eschewing the usual monopodial mode of locomotion common to normal gastropods this extraordinary marine mollusc possesses four fully-differentiated limbs, each with its own wide, hooked paw. It also sports a fairly lengthy tail, bearing a varicoloured tigerine pattern. Moreover, the image accompanying this morphological description in Paré's book shows the Sarmatian Sea's antlered mega-snail to bear a very large and sturdy, heavily annulated, whorled shell upon its back.

This remarkable creature apparently spends much of its time out at high sea on account of its timid nature, but is sufficiently amphibious to be able to venture forth onto the seashore during fine weather in order to graze upon any marine plant life present there. An edible species itself, its flesh is said to be very delicate and tasty to eat, and its blood reputedly has medical properties, ameliorating sufferers afflicted with leprosy.

Needless to say, no snail corresponding with the description communicated in turn by Paré from Thévet's work is known to modern-day science. So could the giant antlered snail of the Sarmatian Sea be as mythical as the web-footed camphurch unicorn, the mer-folk, the winged unipodal humanoids, and certain other unquestionably fabulous entities also documented by these authors, or is it merely a somewhat distorted description of some bona fide animal? 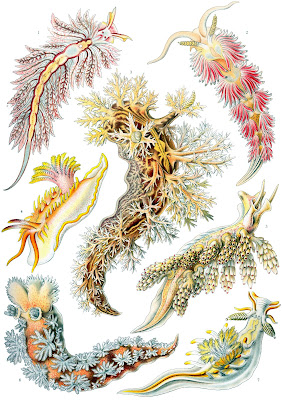 Reading it through, I was reminded somewhat of the nudibranchs or sea slugs, many of which are extremely flamboyant in appearance, with all manner of ornate, plume-like embellishments known as cerata arising dorsally and laterally from their body, which may conceivably explain the 'limbs' and 'paws' reported for this creature. Nudibranchs also have a pair of long cephalic (head-borne) tentacles, and if a species existed whose tentacles bore projections they may resemble antlers. Moreover, the two eyes of nudibranchs are sited directly on their body, just behind the head, not on optic tentacles like those of snails, so a pair of laterally sited eyes would not be impossible. And nudibranchs are well documented from the Baltic Sea.

So what is the likeliest identity of this mystery mollusc? Might it possibly have been an unknown species that became extinct before modern-day science was ever able to confirm its reality and add it to the zoological catalogue of formally-recognised life-forms? Or could such an incredible creature as this never have been anything more than a wholly imaginary beast confined to the pages of early travelogues and compendia of monsters? To be, or not to be? That, indeed, is the question. 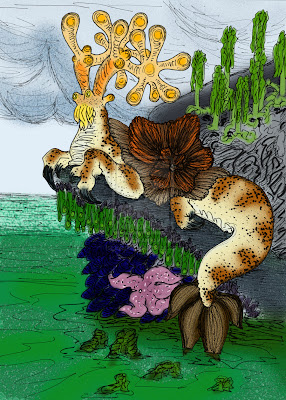