A GIANT DOG-FANGED MYSTERY FROG FROM THE CONGO 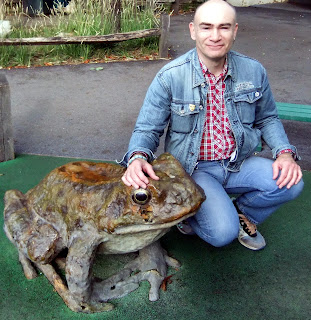 Alongside a statue of a hypothetical giant frog (© Dr Karl Shuker)

The 20th Century opened with one of the most dramatic amphibian discoveries of all time – the aptly-named goliath frog Conraua goliath. Up to 14.5 in long from snout to vent, plus a pair of enormous hind legs, and weighing up to 8 lb, it is the world's biggest known species of living frog (or toad, for that matter), as large in fact as certain antelopes with which it shares its Middle African domain (for further details regarding this remarkable amphibian's scientific unveiling, see my book The Encyclopaedia of New and Rediscovered Animals). However, another very sizeable African frog remains unidentified and unexamined by science almost 70 years after it was first documented.

On 31 December 1945, an article penned by Harvard University herpetologist Arthur Loveridge was published in the zoological journal Copeia, concerning an attack some months earlier upon an askari (native policeman) at Tapili, Niangara, in what was then the Belgian Congo (later renamed Zaire, and now called the Democratic Republic of Congo). Loveridge's source of information concerning this incident was a Mr C. Caseleyr, then Administrator of the Niangara Territory. The askari had come to Caseleyr to inform him that while walking by a pool earlier that evening, he had been bitten on one of his legs by what proved to be a very large frog – he'd lunged out at his attacker with a large club that he was carrying and had killed it outright. And as conclusive proof of his statement, the askari had brought with him the frog's body to show it to Caseleyr.

What was even more surprising than the fact that he'd been attacked by such a creature, however, was the wound that it had produced. For when Caseleyr examined the askari's leg, he could see two puncture marks resembling the wounds that a dog's teeth would leave – and that was not all. When he then examined the dead frog, Caseleyr was very startled to discover that its upper jaw and lower jaw each possessed a pair of sharp teeth that actually did resemble a dog's canine teeth, and its tongue was forked like a snake's. The frog was grey-green in colour dorsally, with a large orange patch on its chest and stomach, and in general shape and size was very large, broad, and fat (though no specific measurements for it were provided by Loveridge).

Loveridge referred to this animal throughout his article as a frog, but Caseleyr personally felt that it seemed more like a toad, although he freely confessed that he had no informed knowledge on such matters. However, Loveridge stated that the creature's notched tongue eliminated a toad as its identity. Yet he also recognised that its description (and most especially the presence of two teeth-like projections in its upper jaw, not just in its lower jaw) readily differentiated this sizeable mystery frog from all known species in that region. Consequently, albeit with great hesitation, Loveridge concluded his article by speculating that "it may be that some large species remains to be discovered in the Niangara region". Yet if so, it has somehow managed to elude scientific detection for several decades since then (and continues to do so today). Impossible? Perhaps not...

This ShukerNature blog article is excerpted from a comprehensive chapter devoted exclusively to cryptic frogs and toads contained in my latest, newly-published book, A Manifestation of Monsters – so be sure to check it out! 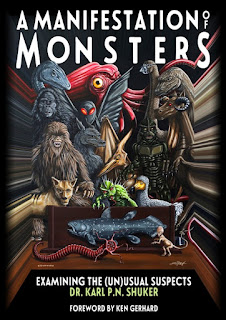