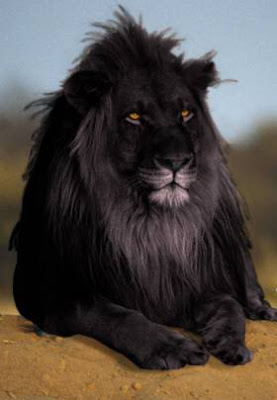 
In recent weeks, two very stunning black lion photographs have been circulating online. One of them is the picture above, opening this ShukerNature blog post, and the other one is documented further down in it. Why they attracted such interest is that according to mainstream zoology, black lions simply do not exist. If they did, and were wholly black in colour, they would most probably be melanistic specimens, analogous if not homologous genetically with black panthers (melanistic leopards) and mutant all-black individuals of other felid species.

Sadly, for those hoping that these two photos therefore represented some major cryptozoological discovery, the reality, as is true ever more frequently nowadays, is that they are nothing more than Photoshopped images.

I traced Photo #1 (above) to the following specific link: http://24.media.tumblr.com/tumblr_m4qd4hvuEr1rv9dvno1_400.jpg (on the following site: martincito1.tumblr.com – which has now vanished!), but I have no idea whether martincito1 created it, or simply added it from elsewhere to their galleries of images there. However, it is unmistakeably a product of photomanipulation, because I also traced the original photo that had been used – depicting a normal tawny lion photographed in Namibia and present on the Leopalmerphotography website (it can be accessed at http://www.leopalmerphotography.co.uk/male%20lion.jpg). 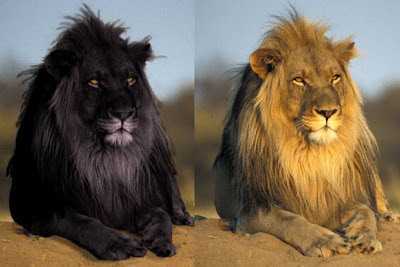 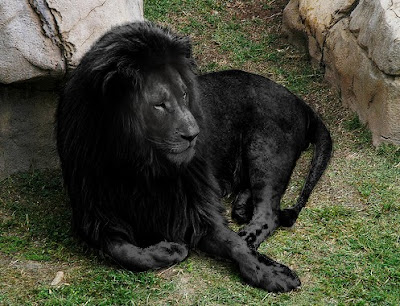 This is actually a photograph of a bona fide exotic lion – namely, a white lion – that has been skilfully converted digitally into a black one (I discovered the original photo on the following site http://www.cutehomepets.com/the-white-lion). Moreover, as I learnt when he kindly posted details upon my Facebook wall on 10 June, cryptozoological colleague Mike Covell successfully traced Photo #2 to digital artist PAulie-SVK, who had created it and placed it in one of their galleries on the deviantART.com site, after which it had been posted elsewhere online by persons unknown wrongly assuming it to be a genuine specimen. (Here is the specific page: http://paulie-svk.deviantart.com/art/Black-Melanistic-Lion-292088989) 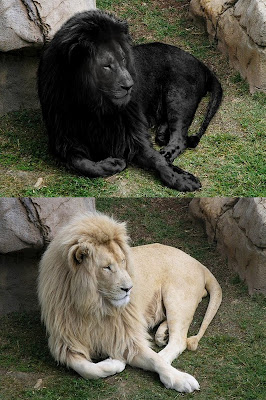 A third online image of a black lion, see Photo #3 (below), is another Photoshopped black lion by PAulie-SVK (this time manipulating an image of a normal tawny lion), produced in wallpaper format (available here: http://paulie-svk.deviantart.com/art/Black-Lion-wallpaper-306684136) 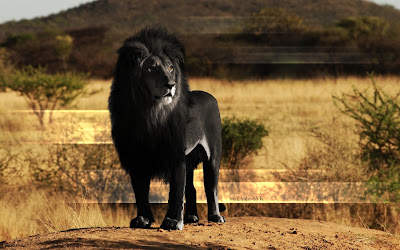 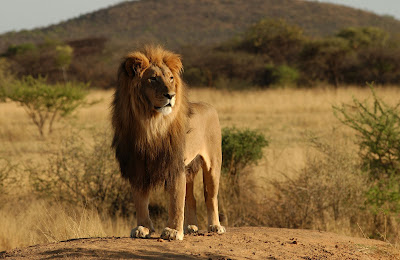 But what about real black lions? What do we know of such ebony-furred enigmas? As already noted, no confirmed sightings exist and only a few sparse, unconfirmed reports, most of which I summarised as follows in my book Mystery Cats of the World (1989):

"According to W.L. Speight, in 1940, an experienced game warden once stated that he had spied a whole pride of pitch-black lions in the Kruger National Park. Half a century earlier, a very dark brown specimen had been killed by soldiers of the Luristan Regiment and was seen by archaeologist Sir Henry Layard at Ispahan in what is now Iran. And an account of a black lioness observed at very close quarters was included in Okavango, by June Kay."

Additionally, in a letter of 20 January 1980 to American cryptozoologist Loren Coleman (who has kindly shared its contents with me), wild cats author C.A.W. Guggisberg stated:

"While there are black leopards in the Aberdares, there never was any talk of black lions. A few years ago a rumour went round that black lion cubs were seen somewhere in western Tanzania, but this was never confirmed."

More recently, media reports emanating from South Africa in 2008 carried bizarre stories of big black lions that had allegedly escaped from the Kruger National Park and were now roaming the streets of Matsulu township outside the Mpumalanga capital, terrifying residents who claimed that they were too afraid to walk outside at night. No tangible evidence for their presence was produced, however, and even if lions were genuinely on the prowl there, they may well have simply been dark brown individuals, or normal lions that had rolled in black mud (like the specimens lately photographed at Madikwe, Tanzania, by Grant Marcus – click here http://www.grantmarcus.com/?p=670 to access his website with some superb photos of them). They might even have been nothing more remarkable than ordinary lions glimpsed at night, or during the day but with bright sunlight behind them. 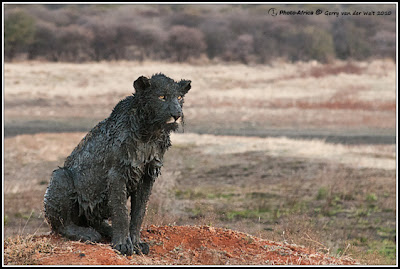 In 1975, at Glasgow (formerly Calder Park) Zoo in Scotland, a lion cub named Ranger was born with a black chest and one black leg. This was possibly an example of mozaicism – the development of fixed, irregular patches of pigment on an individual’s body – as these patches never expanded into other areas. Richard O’Grady, the zoo’s director, planned to breed Ranger when old enough with his mother, Kara, in the hope of producing an all-black specimen, but as I learnt from Richard, although such matings did occur on several occasions, no offspring resulted, even though Ranger and Kara were both in excellent health. Ranger was also mated with other lionesses, but always with the same non-result, suggesting that he may have been sterile. Ranger was euthanased in 1997. 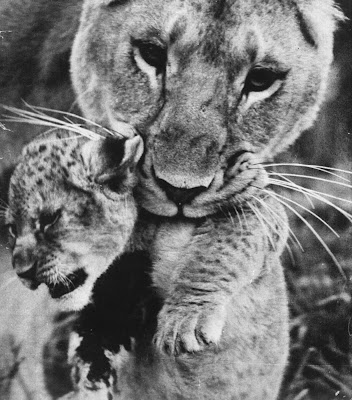 Finally: Before leaving the subject of black lions, it should be explained that the so-called 'black lion' that Marco Polo claimed to have spied in Kollam, India, during his alleged travels in Asia was actually nothing more than a melanistic leopard!

An additional black lion item of particular interest has recently emerged. I've discovered that celebrated lion conservationist George Adamson's autobiography My Pride and Joy (1986) briefly notes that "an almost entirely black" lion was spied in Tanzania. Sadly, however, no additional details concerning this remarkable animal or the sighting's background were given.

A new black lion photograph has begun circulating online, but is it genuine? Check here to read my investigation of this latest image.