NESSIE AND THE NEWSPAPER CARTOON – IN SEARCH OF ITS SOURCE 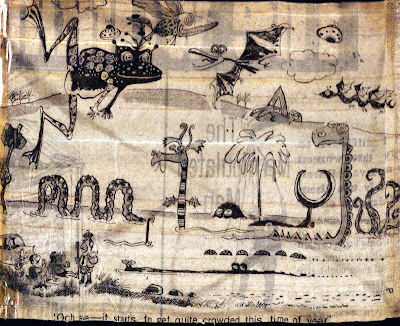 The very considerable cryptozoological archives that I have amassed over many years of research began long ago with a series of humble little scrapbooks of interesting animal-related newspaper cuttings and magazine articles that I compiled as a child. Sadly, my enthusiasm for collecting and preserving these items was not matched at that tender age with the realisation that to render them of scientific worth I should also always note down their source and date of publication. Happily, I have since been able to trace the relevant details for many of them, but not all...

One item that falls into that latter, still-unsourced category is the wonderful Loch Ness Monster-themed newspaper cartoon appearing in this present ShukerNature blog. All that I can recall about it is that it was published during a flurry of media-hyped Nessie activity during the early 1970s, and probably appeared in either the Daily Mirror or the Sun. These are two British tabloid newspapers which, among a wide range of other newspapers (tabloids, broadsheets, nationals, locals), my parents read at that time (however, the cartoon's style and format do not match those of any of their other purchased newspapers from that same period). So if anyone happens to know the newspaper in which this cartoon appeared and/or the date on which it was published, I'd greatly welcome any details.

Incidentally, please forgive the poor quality of my photograph of it – but as this cutting is now roughly 40 years old, it has become somewhat yellowed and extremely tattered round the edges. Nevertheless, I am delighted to have it still, as it remains my all-time favourite cryptozoologically-themed newspaper cartoon.

RESULT!! - I've just googled the cartoon's image, and up it came! Keith Waite was the cartoonist, and it was published in 2 April 1972 in the Sunday Mirror!

Here's a link to it:

In fact, the date of the cartoon should not come as any great surprise, as this was the very next day after a famous Nessie-inspired April Fool hoax. Here is what I wrote about that hoax in my book Extraordinary Animals Revisited (2007):

"Appropriately, however, the most famous cryptozoological April Fool involved the most famous cryptozoological creature - the Loch Ness monster. On 1 April 1972, newspapers worldwide reported the astonishing discovery of a 9-ft-long seal-like beast, weighing over half a ton, that had been found dead at the side of the loch. Soon afterwards, police intercepted a van transporting the body south to Flamingo Zoo Park in Yorkshire.

"When examined, it was found to be the carcase of a dead bull elephant seal, which had been deep-frozen for several days, giving it a peculiar greenish hue. Its whiskers had been shaved off too, and its cheeks had been stuffed with rocks.

"On 2 April, Flamingo Zoo Park's public relations officer, John Shields, confessed that it was an April Fool hoax, which he had secretly set up as a joke directed at the managing director of the company owning the zoo. Shields had used the body of an elephant seal that had died a week earlier at Dudley Zoo, owned by the same company."

Another mystery solved. If only all cryptozoological cases could be resolved so readily!
Posted by Dr Karl Shuker at 20:41