CRYPTOZOOLOGY AND THE BIRTHDAY PRESENT THAT CHANGED MY LIFE

My much-read, greatly-treasured original copy of the Paladin 1972 abridged paperback reprint of On the Track of Unknown Animals (© Paladin/Dr Karl Shuker)


Today is my birthday, the first one that I have ever known without any family since the passing away of my dear mother, Mary Shuker, exactly 36 weeks ago on Easter Monday.

Yet on this poignant day of reflection and remembrance for me, I still fondly recall a birthday present bought for me by Mom a very long time ago but which changed my life forever, literally…

As a zoologist, media consultant, and author specialising in cryptozoology, it is supremely ironic that my introduction to this enthralling subject was anything but promising.

It all began one day during the early 1970s when, aged around 13, I walked into the department store Boots in the town of Walsall in the West Midlands, England, and spotted a copy of the Paladin abridged paperback edition (1972 reprint) of Dr Bernard Heuvelmans's classic book On the Track of Unknown Animals. Picking it up, I opened it at random, and my eyes alighted upon the following sentence, on p. 199, concerning a South American subterranean cryptid called the minhocão:

"Senhor Lebino also related that in the same district, a Negro woman, who was going one morning to draw water, found the pool destroyed and saw an animal 'as big as a house' crawling away on the ground."

"An animal as big as a house! How ridiculous!", I thought to myself, and promptly replaced the offending book on the shelf.

That hasty action could well have ended my cryptozoological career before it had even begun, cruelly stifled at birth. Happily, however, Fate decreed otherwise. My mother, who was with me, had seen that I had been reading this particular book, albeit briefly, so while I was looking elsewhere in Boots she secretly purchased it as a surprise birthday present for me in December of that same year. When I opened the parcel and saw which book was inside, I remembered what I had read before, and viewed it with suspicion, but as soon as I began reading it properly, from the beginning, I was of course totally hooked. In no time, I had read it from cover to cover on so many occasions that I could recite great chunks of it.

Eager to learn more about undiscovered animals, I began collecting every newspaper cutting, magazine article, and book that I could find on the subject. And when, while studying zoology at university, I became friends with a fellow student who actually owned the unabridged 1958 hardback edition of On the Track..., containing several short chapters that had been omitted from my abridged paperback version, and who kindly permitted me to take his book to the nearest photocopier, I felt as euphoric as if I had been handed the Holy Grail!

My copy of the original 1958 hardback English edition, which I finally purchased more than a decade after receiving the paperback edition from Mom as a birthday present (© Rupert Hart-Davis)

How I wished then that I could make a career out of cryptozoology, but, like most zoology students starting university, I anticipated pursuing a traditional professional life as a research scientist.

And indeed, I went on to obtain both a BSC (Honours) degree in pure zoology and also a PhD in zoology and comparative physiology. However, I had always enjoyed writing, and during my spare time I had by now also amassed a formidable private archive of cryptozoological material. So instead of continuing with mainstream zoological research following my PhD, I decided instead to plunge into the uncertain waters of freelance journalism - specialising in cryptozoology and other areas of so-called 'fringe' science.

My copy of the original two-volume French edition of On the Track of Unknown Animals, entitled Sur la Piste des Bêtes Ignorées and published in 1955 (© Librairie Plon)

Some of my early cryptozoological friends and colleagues outside Britain jokingly said that I seemed to spring up from nowhere, and I can appreciate that this may well have been how it looked to them. However, I can assure everyone that, in the time-honoured showbusiness tradition with such matters, it took me quite a long time to become an overnight success!

It began with a number of articles and letters of mine published in various British newspapers, and regular cryptozoological commissions from a British magazine (sadly now defunct) called The Unknown. Following this, I experienced my first success abroad, with a selection of articles accepted for publication in Fate by its then editor, Jerome Clark. My long-running 'Alien Zoo' column in Fortean Times began soon afterwards (and still appears today), as well as regular articles in many other magazines too.

In 1987, I was amazed and ecstatic when my very first book synopsis, proposing an international survey of feline cryptids, was swiftly accepted by a well-respected London publishing firm, Robert Hale. Even before the ink was dry on its contract, I had already begun writing the book, which was published in June 1989 as Mystery Cats of the World - achieving great success, staying in print for several years, and bringing my name to widespread attention at last. Two years later saw the publication of a second book of mine by Robert Hale - Extraordinary Animals Worldwide, reviewing a diverse range of animal anomalies.

I had also been researching and preparing another book for quite a long time (although initially only as a hobby), on a subject that had never been covered in book form before - new and rediscovered animals of the 20th Century. In 1993, however, five years of exhaustive work on this pioneering project climaxed with its publication by HarperCollins, as The Lost Ark - which I successively updated in subsequent years to yield two fully-revised, much-expanded sequels – The New Zoo (2002), and The Encyclopaedia of New and Rediscovered Animals (2012).

Twenty years have somehow raced by almost unseen and unrealised by me since the publication of The Lost Ark, and the current tally of books written by me stands at 20, plus another 12 for which I have acted as consultant and/or contributor, as well as countless articles and blog posts, and my continuing editorship of the Journal of Cryptozoology (click here and here for a complete listing of my books and those for which I have acted as consultant/contributor).

And they all owe their existence to that unassuming birthday present bought for me by Mom all those years ago. Today, it is battered, tattered, stapled, and sellotaped together to within an inch of its life, almost read into oblivion by me over the years. Indeed, I eventually purchased a second, near-pristine copy for my cryptozoological bookshelves in my study. But my original copy remains one of my most treasured possessions, safely housed within a bookcase in my bedroom alongside other much-loved books from my childhood and early teenage years.

Holding two books that influenced me greatly during my formative years, both of them bought for me by Mom (© Dr Karl Shuker)

Thank you, little Mom, for being my rock, the foundation upon which I have built my entire life, and, by giving me this humble little book as a birthday present over 40 years ago, propelling me along a hitherto-unsuspected but inspirational path - opening my eyes to the fascinating world of mystery animals that led to my lifelong career in cryptozoological writing and research, and which in turn has given me so much happiness and engaged my continuing interest for such a very long time.

How I wish that you were here today, to wish me a happy birthday and to give me a birthday card like you've always done every year of my life. You often joked that I'm an incorrigible hoarder, but occasionally it can be of great benefit, and today was one such occasion. I've hoarded quite a few of the birthday and Christmas cards that we've sent to each other over the years, so today I found some birthday cards that you'd written and given to me in earlier years, and I've put a couple of them up on the mantelpiece here, where I always placed yours in previous times. 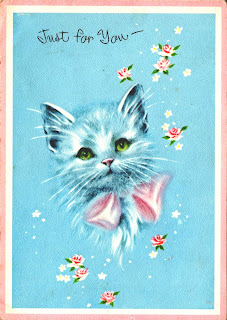 The wonderful birthday card that Mom gave to me on my 11th birthday in 1970 - knowing that I liked cats and that my favourite colour was blue, she knew how much I'd love this card, and I've treasured it ever since - thanks Mom (© Dr Karl Shuker)

So even though you can't be here with me today, I still have a birthday card from you – two, in fact – to look at and remind me with great joy and thankfulness of when you were here, of all the many happy birthdays that we spent together down through the years, and how very lucky and truly blessed my life has been with you in it as my mother.