HORNING IN ON THE UNICORN SNAKE 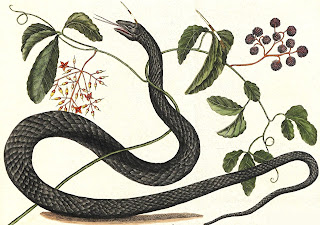 During the Middle Ages and even several centuries later, explorers and travellers to exotic far-flung localities around the globe would often return home to Europe with unusual animal specimens as interesting souvenirs. Sadly, however, some of these items were outright fakes (such as the infamous 'Feejee mermaids', which were composite creations deftly manufactured from preserved monkeys and large fishes) or deliberately misidentified objects (such as ibex or antelope horns masquerading as griffin or dragon claws) that had been sold to the unsuspecting voyagers at exorbitant prices by unscrupulous vendors.

An ophidian representative from these shaming cabinets of credulities was the unicorn snake. Generally procured in the East, this usually took the form of a dried, preserved serpent of fairly sizeable proportions but sporting as its most eyecatching characteristic a long spine protruding from the centre of its brow like a veritable herpetological unicorn. 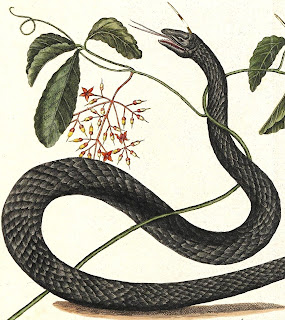 Needless to say, however, an examination of such a specimen by an experienced naturalist invariably revealed that its 'horn' was merely a cut-down quill from a porcupine or a spine from a hedgehog or spiny-finned fish that had been carefully inserted and glued inside the serpent's head. I have also read of living specimens of supposed unicorn snakes, though I can't imagine that any snake would live very long if they had been subjected to such a barbaric treatment, because the inserted quill or spine would probably pierce their brain.

Worth noting is that there is a real species of snake that is sometimes dubbed the green unicorn. More commonly termed the rhinoceros rat snake Rhynchophis boulengeri, however, this green-scaled non-venomous colubrid from Vietnam and China earns its rhino and unicorn epithets from the very prominent, pointed, scaly protrusion borne upon the front of its snout like a small horn. 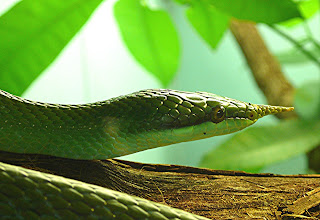