AT THE SIGN OF THE CAT - FELINE SYMBOLISM, DREAMLORE, AND FOLK-BELIEFS. 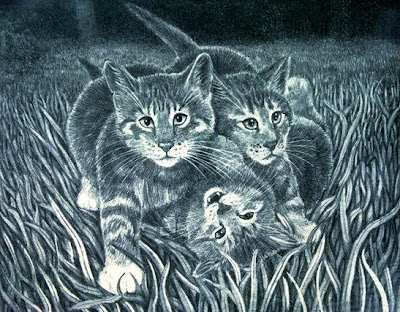 As my previous blog, surveying dog symbolism in dreams, attracted so much interest, here's a feline counterpart, examining cat symbolism, and not just in dreams this time.

The feline image - sleek, silent, shadow-like, the embodiment of sphinx-like inscrutability - is unquestionably one of the most potent, diverse, and mystical of all animal symbols. There have been dark periods during its long affiliation with humanity, as in Europe during the Middle Ages, when the cat was denounced as a creature of evil, in league with witches and demons. Equally, however, as will be seen here, it has also inspired many much more positive, benevolent associations - everything from moon guardian to marriage blesser.

LUNAR GODDESSES AND OTHER EXAMPLES OF FELINE FEMININITY

The cat's lunar links date back at least as far as the ancient Egyptians, who likened the changing dilation and contraction of the pupils in its glowing eyes to the waxing and waning of the pallid moon, and its nocturnal activity to the moon's night-time visitations. Indeed, according to Egyptian mythology, the cat owes its eyes' shimmering phosphorescence to the sun-god Ra, who entrusted to it the sun's brilliant lustre, to be guarded and diligently transported by it throughout the night - so that our planet would never be entirely without light, and as a promise that the sun would itself return every morning.

As an emblem of the moon, which is traditionally portrayed in many mythologies worldwide as feminine in comparison with the masculine sun, it was inevitable that the cat too would become a symbol of femininity and associated with a number of important female deities. Most familiar of these is Bast, Egypt's golden-eyed cat-headed goddess of the moon (again) and fertility, via whom the cat has also become linked symbolically to childbirth.

Indeed, 'Ru', which is the Egyptian hieroglyph representing birth, was based upon the shape of a cat's eye, and when placed upon the Tau cross, representing time, yielded the famous ankh - symbol of life and immortality. This later became synonymous with Venus, the Roman goddess of love, thereby reinforcing the cat's link with femininity and fertility.

Similarly, Venus's Norse counterpart, the goddess Freya, not only symbolising love and passion but also ruling the dark, mysterious kingdom of the night, rode through the sky in a chariot drawn by a team of cats (originally lynxes). And in Hindu mythology, Shasti, goddess of childbirth, is borne aloft not upon a horse or elephant, but upon a cat instead.

The cat's nocturnal lifestyle readily lends itself to deep, metaphysical feline symbolism. As revealed in Tom Chetwynd's Dictionary of Sacred Myth (1986), because the cat can see in the dark and is thus active at night, it has become a symbol of intuition, capable of navigating through the shadowy realm of the unconscious and seeing into the darkness of the future.

Notwithstanding this, the cat has failed to receive a very good press from those who specialise in dream divining. To dream about a cat is traditionally claimed to denote bad luck, unless you can chase it away before waking, whereupon you will successfully overcome sizeable obstacles and acquire great fame and fortune. Similarly, to dream of hearing a cat mewing or screaming is supposed to indicate that you have a false friend who will utilise lies and misleading words to create problems for you. As before, these odd ideas have no doubt been inspired by the cat's secretive, enigmatic nature and liking for night-time prowling.

In addition to the cat's personification of intuition, its lunar associations are not lost upon Chetwynd either. He notes that cats can be white or black, "...like the full and dark moon and so depict the extreme opposites of life and death, nourishing milk and dark poison. But they also come striped and so are the pattern of the transformations of the moon which governs the alternating rhythm of the tides, and so the whole great movement of life".

The cat's symbolic ambivalence is very apparent within Eastern cultures. For instance, both in China and Japan the cat was traditionally looked upon as a cunning shape-shifter, capable of transforming itself into many different guises. In China, however, it reputedly underwent these transformations for evil purposes, and was a symbol of yin (thereby allied yet again with femininity), whereas in Japan its transformations were beneficial. Moreover, Japanese sailors actively welcomed cats on account of their supposed ability to ward off dangerous maritime demons. Similarly, whereas in Zoroastrianism the cat serves the evil deity Ahriman, in Islam it is cherished by Muslims because it was blessed by Mohammed.

Perhaps the most familiar example of contrasting double images in the West concerns black cats and white cats. Once the superstition-ridden age linking cats and witchcraft had vanished in Britain, the black cat became associated with good luck, especially if one of these sable-coated felids should cross your path - whereupon you should make a wish and hope for it to come true. White cats, conversely, were looked upon as weird, unearthly creatures.

Yet in the U.S.A., as well as in certain continental European countries, such as Spain and Belgium, the reverse situation has prevailed. Here, a black cat still symbolises darkness and is viewed somewhat uncomfortably by the more superstitious-minded, whereas a white cat symbolises light and is welcomed as a sign of impending good fortune - so too are grey cats. Just to be different, in Russia lucky cats are neither black nor white, but blue. And in East Yorkshire, although it is lucky to own a black cat, it is unlucky to meet one.

SNEEZING, SAILORS, AND OTHER SUPERSTITIONS OF THE FELINE KIND

The cat features extensively in superstition and folk-beliefs. For instance, if a cat should sneeze once, good luck will visit its owners - or the weather will become rainy! If it should sneeze three times, however, its owners will all develop colds (rather like the cat, one would imagine, if it has sneezed three times in succession!). And if it should sneeze near a bride on the morning of her wedding, her marriage will be a happy one.

To say the word 'cat' outloud down in a mine or on board a ship is not recommended, at least according to early superstitions, but the presence of a cat on a ship is said to bring good luck, and the ship's cat is often among the first individuals to be rescued by the crew in the event of a shipwreck. It bodes particularly well for a ship's good fortune if a cat should come aboard uninvited and decide to stay - woe betide anyone foolish enough to try to chase it off! And any sailor's wife living on the Yorkshire coast who kept a pet cat at home would feel reassured that her husband would always return safely home from the sea.

Last but not least: the reason why cats are said to have nine lives is that in ancient times, the number nine was deemed to be exceptionally lucky, because it was three times three, or a trinity of trinities. And of all animals, what could be more suited to being blessed by the gift of nine lives than that not only very tenacious but also famously lucky species, the cat?
Posted by CFZ: Cryptozoology Online at 18:56