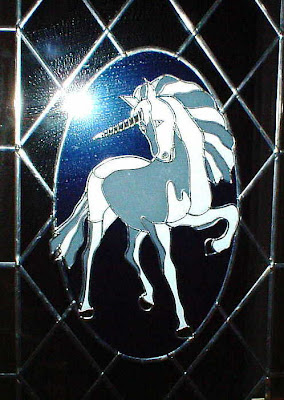 Here is an exclusive excerpt from Chapter 1 of my in-progress unicorns book, Unicorns: A Natural History


THE UNICORN AND THE MAIDEN

The unicorn personifies Nature in its purest, wildest, freest, and most magical form. Yet even this singularly elusive, and illusive, beast did not escape the attention of hunters, who coveted its splendid horn for the miraculous powers that it allegedly possessed. Nevertheless, the unicorn could readily evade its human pursuers - unless they enticed it with a certain very special lure, to which it was irresistibly, and fatally, attracted...

It had been a day of abject failure for the king's hunting party. Hour after hour of diligent pursuit through the royal forests had been rewarded with nothing more than an occasional glimpse of a fleeting silver-shod hoof, or the momentary glitter of a sparkling horn, amid the shadowy dells and woody trails. Yet their leader was far from despondent, for he knew that they had been purposefully directing their quarry's flight towards a secret location at the very heart of the forest where the monarch himself had placed a sublime snare from which no unicorn could possibly escape.

Far ahead of the hunting party, the unicorn strolled nonchalantly, well aware of their presence, but equally certain of his ability to elude them with effortless ease. Here, alone in his woodland realm, at peace with nature, he shimmered and shone as if bathed in the pallid luminescence of living moonlight, and his long spiralled horn glittered and glistered with starlit brilliance. Even his long silky mane rippled with lustrous beams of light as the cool forest wind caressed its flowing tresses, and his slender but powerful hooves gleamed but made no sound as he trotted across stones and twigs strewn across the ground. Soon he would take flight again, leaving his pursuers far behind to seek him vainly once more, just as he had done so many times before. But then, abruptly, he sensed something - something profoundly mysterious and beguiling, but truly wonderful. In all his years in this place, he had never sensed anything like it before. Yet without even understanding why, he instantly felt compelled to seek it out.

The unicorn moved swiftly between the trees, drawn inexorably by something intangible and unrecognised - yet which seemed to sear his eyes with strange but magnificent visions, to assail his ears with heavenly refrains as if sung by a celestial choir, and to fill his flaring nostrils with a glorious scent that intoxicated him completely, suffusing his very being with heady delight, until he felt as if he were soaring instead of merely galloping. Onwards he raced, until he came to a sunlit glade, sited in the deepest region of the forest. All around was darkness and gloom, but the glade itself was richly illuminated from above by a golden panoply of sunlight. And here, seated demurely on the soft grass amid a multicoloured dappling of flowers, was a youthful maiden - her long flaxen hair falling down about her like waves of burnished gold, and her crimson dress swirling over the grass in deep folds.

The unicorn stood at the edge of the glade, mesmerised by the sight of this fair damsel. Never before had he seen anything so beautiful, so wonderful. Even the most fragrant of blooms, the most magnificent of jewels, and the most brilliant of rainbows seemed wan and lifeless to him now, compared with her radiant beauty and grace. He moved forward slowly, head slightly bowed, and the maiden raised hers to look at him. Their eyes met - hers as blue as a robin's egg, his as deep as the oceans - and his heart was filled with a tranquillity and love that he had never experienced until now. Here was the most perfect human that any unicorn could ever hope to encounter and one that no unicorn could ever resist - a virginal maiden, untouched, immaculate. This was the daughter of the king himself - who knew that the very presence of the princess would be enough to entice the unicorn here, where his men could then surround it. There would be no escape.

The unicorn, however, suspected none of this. He knew only that he had found what he had unconsciously been seeking all his life - the embodiment of love, truth, and happiness. He knelt before the princess, and placed his noble head upon her lap, and as she gently stroked his rippling mane she ran a slim, silken-gloved finger along his ornately whorled horn, gazing at the unicorn before her in wonder, knowing that few humans had ever been granted so intimate an encounter with this most mystical and marvellous of creatures.

The unicorn closed his eyes in rapt acquiescence, at perfect peace, having found at last his heart's desire. And so he never saw the hunters stealthily emerge from the bushes at the edge of the glade and move swiftly towards him on all sides. Nor did he see the leader of the hunting party raise his spear-bearing arm in readiness to strike the fatal blow, or a second hunter who stepped forward alongside his leader, bearing a heavy, sharp-bladed axe with which the unicorn's precious horn would be hacked from his brow. And he did not see, nor even suspect the presence of, the sorrowful tears that fell silently from the eyes of the princess as she gazed down for the last time upon that gentle, trusting creature whose head still lay nestled in her lap.

The spear pierced, the axe fell, the deed was done. The scarlet blood that flowed from the breast of the dead unicorn mingled with the crimson dye of the princess's dress, and his horn, now dull and crudely severed at its base, was borne aloft triumphantly by the leader of the hunt. At that same moment, a rider seated upon an ebony-hued steed appeared, dismounted, and walked towards the group. It was the king. The huntsmen immediately knelt, but he bade them leave and take the unicorn horn with them. He then turned to his daughter, smiling, and offered her a pouch of golden brocade, filled to the brim with dozens of bright silver coins - her reward for having agreed to be the lure to snare the unicorn.

But the princess shook her head.

"No, my father," she said. "There is too much here - thirty pieces of silver is all that I deserve for what I have just done".

Then she walked away, leaving her father the king holding the pouch of silver in his hand, and the dead, hornless unicorn lying cold and still upon the grass.
Posted by CFZ: Cryptozoology Online at 11:37