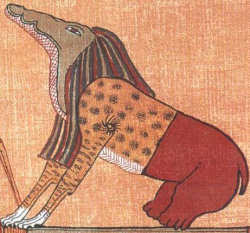 The ammut
Watching the first episode of the third series of 'Primeval' - one of my all-time favourite TV sci-fi shows - I was amused to see that it portrayed the Egyptian mythological monster Ammut as a time-slipping prehistoric crocodylian known as Pristichampsus. In Egyptian mythology, the role of Ammut was very precise, and petrifying, as revealed in my retelling of it here:

The Ancient Egyptians believed that after a person died, his soul could live on and enter a second, better life - but only if he had not committed any sins during his first life. To check whether he had lived a good life, a person's soul had to be questioned, in the presence of a nightmarish monster....!

The pharaoh, ruler of all Egypt, had died, and now his soul was in the Underworld, awaiting his fate in the Hall of Judgement. Before him stood Anubis, Egypt’s jackal-headed god of death, and at the god's feet sat a truly terrifying female monster. Known as Ammut, she was so frightening that no-one dared to look at her.

If the pharaoh’s soul had been brave enough to do so, however, he would have seen that she had the head of a ferocious crocodile with huge jaws, and that the front half of her body was that of a lion, whereas the back half was that of a hippopotamus. Ammut was there for one very specific, horrific reason, which involved the large pair of weighing scales held by Anubis.

Waiting to be placed on one pan of these scales was a single very special feather, the Feather of Truth. And waiting to be placed on the second pan was the pharaoh's own heart. If his heart weighed less than the feather, this meant that the pharaoh had been a good man while alive, and his soul would live on. But if his heart weighed more than the feather, this meant that he had been an evil man - and his heart would be taken off the scales, then thrown to Ammut to be eaten by her! And once a person's heart had been eaten, his soul could not be reborn.

Anubis, the pharaoh's soul, and Ammut all watched the scales closely, and then the pan bearing the Feather of Truth sank slowly downwards, as the pan bearing the pharaoh's heart gently rose up. The pharaoh had indeed been a good, sinless man! His soul was saved, and his heart would not be eaten by Ammut. Instead, she lowered her head and sat back down at the feet of Anubis, waiting grimly for the next dead person's soul to arrive here for judgement, and for that person’s heart to be weighed...
Posted by CFZ: Cryptozoology Online at 11:23