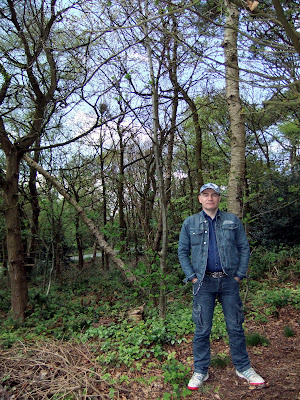 Here I am on sunny (for some of the time!) Cannock Chase 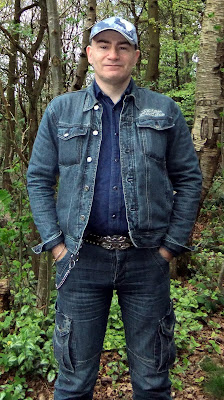 Today, on Britain's May Bank Holiday, I spent part of the afternoon (the part when it wasn't raining!) seeking trolls, as you do, on Cannock Chase - a vast expanse of woodland not far from where I live. Just in case you are wondering whether I've been spending too much time in the sun (though in rainy old Britain, opportunity would be a fine thing!), please let me explain.

Cannock Chase, a vast protected expanse of wooded and heather-carpeted countryside near Stafford in Staffordshire, England, has been for many years the scene of alleged encounters with a bizarre hairy entity variously likened by its startled eyewitnesses to a bigfoot or even a werewolf. These reports (some of which, according to one investigator, have come from such credible claimants as scout leaders on patrol, military, police, ex-police, and even a local postman) have attracted considerable interest and attention from local paranormal and cryptozoological researchers. Moreover, a wide variety of suggested identities have been proffered – from paranormal man-beasts, or crazed tramps, to huge stray dogs, or even extraterrestrial aliens.
In May 2007, moreover, a local resident (who has chosen to remain anonymous) hit the headlines in this area with a new and truly extraordinary proposal. He has soberly claimed that a tribe of primitive humanoid beings may be inhabiting the vast honeycomb of subterranean tunnels and passages beneath the surface of Cannock Chase, which was formerly a major mining area, but occasionally coming above-ground to hunt deer and other wildlife for food. And it is rare sightings of these latter-day trolls, he believes, that is responsible for the accounts of hairy bigfoot- or werewolf-type entities – as well as for an unexpectedly high number of local pets going missing here.
Sadly, I did not encounter any trolls during my own brief foray here today, but remembering from Nordic folklore their carnivorous proclivity, this is probably no bad thing!
Posted by Dr Karl Shuker at 22:45