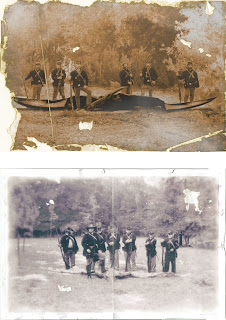 Over the years, I have documented on ShukerNature a number of alleged thunderbird photographs (some of them even being claimed on various online sites to be THE infamous, missing thunderbird photograph – click here for the latter's fascinating if highly frustrating history), and I have exposed each one of them either as an intentionally deceiving hoax perpetrated by creator(s) unknown, or as a pastiche deliberately intended as a tribute to the missing thunderbird photo that has been openly and unequivocally identified as a pastiche by its creator(s). Click here, here, here, and here to access these cases. Yet the photographs from this particular cryptozoological category that have elicited the most queries sent to me by readers, and continue to do so, are the two that form the subject of this first ShukerNature blog article of mine in 2021 – namely, the so-called Civil War Pterodactyl thunderbird photos.

Before I go any further, however, I must point out that their full details were first revealed online elsewhere (see later for a clickable link to that source). Consequently, this present concise article of mine is intended merely as a summary, an elucidation, for anyone who has not seen that very comprehensive original coverage and is therefore checking ShukerNature for information concerning them instead.

First and foremost, setting the scene: as my article's title and opening illustrations clearly demonstrate, there is not just one Civil War Pterodactyl thunderbird photograph (as is sometimes mistakenly assumed), but two. Although superficially similar, each depicting a group of men in American Civil War uniforms standing around a large seemingly-killed pterodactyl-like mystery beast lying on the ground, and therefore corresponding with some claimed recollections of the missing thunderbird photo (in turn explaining why they have been popularly dubbed the Civil War Pterodactyl thunderbird photos), a closer look readily shows that the two beasts are in fact quite different, as are the men.

Both photos look very old and tattered, their existence ostensibly indicating that at some stage during the American Civil War (1861-1865), a group of soldiers somehow managed to kill a living, modern-day pterodactyl, or something extraordinarily like one. As a result, the two images have variously appeared separately and together on many online sites and elsewhere as evidence that these winged reptiles did not become extinct at the end of the Cretaceous Period approximately 65 million years ago as currently indicated by the fossil record, but have somehow survived into the present age, at least in North America.

In fact, the reality is very different. As will be seen, both Civil War Pterodactyl thunderbird photographs have the same origin, and are completely artificial, but were created for two very different, entirely separate purposes.

One of these photos is commonly dubbed the PTP Photo online, and sometimes even the PTP Pterodactyl Photo, although the latter is decidedly tautological, bearing in mind that PTP is short for Pterosaur Photo (and as pterodactyls constitute a major taxonomic group of pterosaurs, this means that if referred to in full it would be the Pterosaur Photo Pterodactyl Photo!). Here it is: 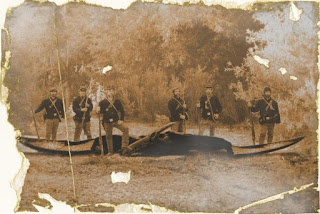 The other photo does not seem to have a specific name. Consequently, for reasons that will shortly become obvious, I shall refer to it hereafter as the AP Photo, with AP being short for Advance Publicity. Here it is: 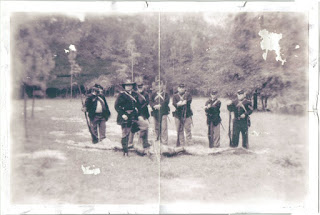 Originally screened from October 2000 until June 2001, FreakyLinks was a single-season, 13-episode science fiction TV show originating in the USA. It was created by American film producer Gregg Hale (best known for producing the movie The Blair Witch Project) and David S. Hoyer (an American film-maker, novelist, and comic book writer, with many superhero movie screenplays to his name, most notably those for the trilogy of Blade movies and the Dark Knight trilogy of Batman movies). The production companies responsible for bringing FreakyLinks to the small screen were Haxan Films, Regency Television, and 20th Century Fox Television

The focus of FreakyLinks is a mysteries-obsessed geek named Derek Barnes (played by Ethan Embry), who has a website entitled FreakyLinks through which he channels his investigations and findings relating to a wide range of unexplained phenomena, and he is assisted in his endeavours to uncover the truth by a couple of friends. Each episode deals with a different case investigated by them, and the subject of Episode 4, which is entitled 'Coelacanth This!', is a series of recent attacks upon people by some huge winged mystery beast. Derek believes that this may be a living pterodactyl (i.e. a prehistoric survivor, hence the coelacanth reference in this episode's title) and, in turn, the origin of cryptozoological thunderbird reports dating back more than a century.

This is where the two Civil War Pterodactyl photos come in, because the PTP Photo had been created specifically (and digitally) by a VFX company hired by the production design team at FreakyLinks to appear (as indeed it did) in 'Coelacanth This!', which was first screened on 27 October 2000. At the time of my writing and uploading this blog article of mine onto ShukerNature, 'Coelacanth This!' can be watched for free here on YouTube, so you can readily confirm for yourself that the PTP Photo does indeed appear in this episode. Moreover, below are three screen shots of this photo's presence in it that reveal precisely when it first appears (it does so more than once in this episode – see the end of this present article for a screen shot of its reappearance). 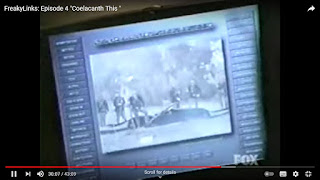 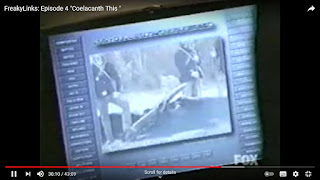 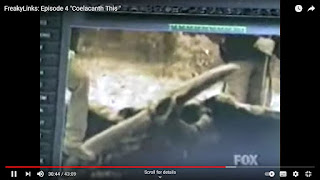 Three screen shots of the PTP photo's first appearance in 'Coelacanth This!' – Episode 4 of FreakyLinks - please click each one to enlarge it for viewing pueposes (© FreakyLinks/Haxan Films/Regency Television/20th Century Fox Television – reproduced here on a strictly non-commercial Fair Use basis for educational/review purposes only)

The PTP photo should not be (but very often is) confused with an earlier, visually inferior Civil War pterodactyl photo. This latter picture is none other than the AP Photo, which features different actors as the Civil War soldiers, plus a different pterodactyl, in the form of a physical model. The AP Photo had also been created for FreakyLinks but, crucially, was used by them solely for advance publicity purposes, being included (together with a specially-created back story for it) in their FreakyLinks website (which in turn had been launched two years prior to the show's actual screening in order to promote it), but never actually appearing onscreen in the show itself.

Two decades later finds the FreakyLinks website now archived within the website of Haxan Films, but if you click here you can still access the page from it containing the AP Photo. Moreover, the pterodactyl model from the AP Photo is now housed at veteran cryptozoologist Loren Coleman's famous International Cryptozoology Museum at Portland, in Maine, USA.

But why do two different Civil War Pterodactyl photos associated with FreakyLinks exist? Why wasn't just one created, to appear both onscreen in the show itself and online in its publicity website? The reason is as follows.

The AP Photo was created first, but apparently there was subsequently a problem in obtaining talent releases for the actors featured in it, which would be needed if it were indeed to be shown onscreen in the episode. Also, the show's production designer allegedly didn't think that the AP Photo's pterodactyl was very impressive.

So Haxan Films hired the visual-effects company E=MC2 Digital to create a second, more spectacular Civil War Pterodactyl photo (which would then be shown in the episode), and signed up new actors to appear in it. The result was the PTP photo, with the pterodactyl in it being a digitally-added image this time, as far as I'm aware, rather than a physical model.

So, to reiterate the key fact here: it was the PTP photo that was used onscreen in the actual FreakyLinks episode, not the AP Photo, which appeared instead in the show's online publicity website.

All of this and more concerning the two different FreakyLinks Civil War Pterodactyl photos was first revealed by Brian Dunning in a fascinating Skeptoid podcast and accompanying online transcript of 9 January 2018 that finally and comprehensively dispelled the confusion that had hitherto enshrouded these two images for so long online. Consequently, I strongly recommend that you click here to listen to his podcast and/or read his transcript for full details concerning this now fully-resolved but still very interesting cryptozoological case. (A detailed analysis of the PTP photo within the context of putative living pterosaurs can also be accessed here.) 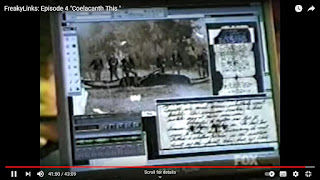 A screen shot showing the reappearance of the PTP Photo near the end of the 'Coelacanth This!' episode of FreakyLinks (© FreakyLinks/Haxan Films/Regency Television/20th Century Fox Television – reproduced here on a strictly non-commercial Fair Use basis for educational/review purposes only)
Posted by Dr Karl Shuker at 21:31