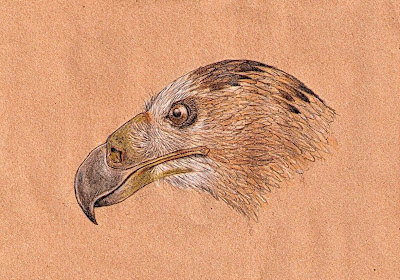 Weighing 22-33 lb in adult female specimens, Haast’s eagle Harpagornis moorei, formerly native to New Zealand’s South Island, was the largest eagle of all time, and is widely accepted as the origin of traditional Maori legends referring to a monstrous human-killing raptorial bird known variously as the pouakai or hokioi. As it is believed to have preyed upon the very large flightless moas that also once inhabited South Island, it should come as no surprise to learn that this colossal bird of prey’s disappearance seemingly coincided with the demise of the moas (caused in turn by hunting and habitat destruction by humans), with its official extinction date estimated at approximately 1400 AD. Very recently, however, while browsing the Wikipedia entry for this species, I discovered a remarkable snippet of information suggesting that either Harpagornis itself or else another now-extinct but very sizeable bird of prey endemic to New Zealand may have lingered into much more recent times, only to be extinguished in the most demeaning manner:

"A noted explorer, Charles Douglas, claims in his journals that he had an encounter with two raptors of immense size in Landsborough River valley (probably during the 1870s), and that he shot and ate them. These birds might have been a last remnant of the species, but some might argue that there had not been suitable prey for a population of Haast's eagle to maintain itself for about five hundred years before that date, and nineteenth century Maori lore was adamant that the pouakai was a bird not seen in living memory. Still, Douglas'[s] observations on wildlife generally are trustworthy; a more probable explanation, given that the alleged three-metre wingspan described by Douglas is likely to have been a rough estimate, is that the birds were Eyles'[s] harriers [Circus eylesi]. This was the largest known harrier (the size of a small eagle) — and a generalist predator — and although it is also assumed to have become extinct in prehistoric times, its dietary habits alone make it a more likely candidate for late survival."

If, however, these were the last Haast’s eagles, what an ignominious finale for such a spectacular species – slaughtered and served up as dinner by a hungry Westerner, for whom the chilling age-old Maori legends of murderous winged marauders from the ancient skies were nothing more than quaint fables, despite the very substantial evidence to the contrary that his twin kills had presented not only to his eyes but also to his stomach!