AND NOW FOR SOMETHING COMPLETELY DIFFERENT! IT'S MONTYPYTHONOIDES - AND CO. 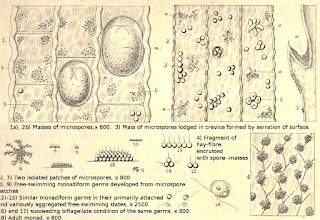 When Linnaeus introduced his system of binomial nomenclature during the 1730s and 1740s, it revolutionised the naming and formal biological classification of species. Every so often, however, as even scientists are only human, there have been some truly memorable, unexpected deviations from the usual, eminently serious and supposedly strictly accurate, relevant Latin* names bestowed upon the myriad of life forms sharing our planet (*'Latin names' is itself a misnomer, as many are at least partially derived from Greek!). Here, then, in no particular order, are 20 of my all-time favourite - and totally genuine, scientifically accepted - generic, binomial, and trinomial novelties:

Raphus cucullatus - variously translated as 'hooded bustard', 'cuckoo with seams', or (politely!) 'cuckoo's rump', given to the dodo, but why?!!

Polypterus mokelembembe - I kid you not, in 2006, this newly-differentiated species of bichir (an archaic fish lineage currently boasting around 15 modern-day species) was named after cryptozoology's very own Congolese neo-dinosaur, the mokele-mbembe, emphasising the bichirs' own antiquarian affinities.

Agra sasquatch - staying with cryptozoological appellations: in 1982, entomologist Terry Erwin gave this noteworthy name to a new species of carabid (ground beetle) that had big feet; and, clearly a crypto-fan, in the same year he named another new carabid species Agra yeti. Nor can we forget, a year later, Erwin's naming of another new carabid, Agra vation, and yet another, Agra phobia. Honestly!

Draculoides bramstokeri - named in 1995, this is a species of cave-dwelling, light-avoiding schizomid (short-tailed whip scorpion) with fang-like pedipalps, and a positively vampirish proclivity for sucking the body fluids out of its victims, not of course that you'd ever have guessed at any of these characteristics from its binomial!

Dicrotendipes thanatogratus - one for Jon's musical tastes here, as this chironomid (non-biting midge)'s specific name directly and deliberately translates as 'Grateful Dead'. Nor should we forget Zappa, a genus of goby.

Harryhausenia - had I known that the CFZ were going to devote a multi-contributor blog to the amazing Ray Harryhausen a few days ago, I could have blogged about this recently-named genus of fossil sand crab (commemorating Ray's stupendous stop-motion giant crab in the film Mysterious Island), but better late than never! Happy 90th birthday, Ray!

Han solo - not from a galaxy far far away, but rather from a time far far distant, this Chinese species of agnostid trilobite was named in 2005 as a dare, but its Star Wars binomial is perfectly valid.

Godzillius - this monstrously-named genus houses the largest species of Bahamanian remipede - exceedingly small but taxonomically monumental crustaceans first made known to science as recently as the early 1980s.

Pimoa cthulhu - one for Richard Freeman and fellow Lovecraftian devotees, a new spider named in 1994 after the latter writer's sinister fictional deity.

Eeyorius - for lovers of more gentle, inoffensive characters, this genus of Australian fish was named in 1986 after A A Milne's melancholic donkey, because just like him these fishes enjoy living in damp, shadowy, secluded localities.

Phallus daemonicus - I'll leave you to guess what this fungus looks like!

Volva volva volva - ok, Linnaeus, we get the message! Named by the great man himself in 1758, he clearly wanted to emphasise which part of the female anatomy this subspecies of cowry resembles!

Csiromedusa medeopolis - described earlier this year, this new Tasmanian freshwater jellyfish has a generic name that commemorates CSIRO (Australia's eminent Commonwealth Scientific and Industrial Research Organisation), and a specific name that translates as 'city of gonads'. Don't ask me - I only blog these things! (Apparently, its gonads resemble a series of skyscrapers.)

Heerz lukenatcha - had someone been watching too many Humphey Bogart films when they named this new braconid wasp in 1993?

Kamera lens - a snappy little name given to a protist in 1917.

Vini vidivici - one for our more classically-educated readers! Named in 1987, this is - or was - the conquered lorikeet, a now-extinct parakeet from the Marquesas Islands in the South Pacific.

Ytu brutus - And still with Caesar, this is a genuine species of water beetle from Brazil.

And finally, a couple of truly wonderful zoological monickers that, tragically, have not survived the test of time, or taxonomy:

Montypythonoides riversleighensis - inspirationally christened in 1985 after the famous British TV comedy show, this giant fossil python from Australia has since been rechristened Morelia riversleighensis as it has been shown to be very closely related to various modern-day species belonging to this latter genus, but was this recognition of affinity really so vital as to warrant the loss of such a uniquely-iconic generic name as Montypythonoides ?

Similarly, the once enchantingly-named clam Abra cadabra has now been reclassified in the genus Theoria, but Theoria cadabra just doesn't have the same ring (magical or otherwise!) to it, does it? Shucks! I take it back - scientists don't have a sense of humour after all!