THE MONSTERS OF LAKES ILIAMNA AND CLARK - FISHING FOR THE TRUTH 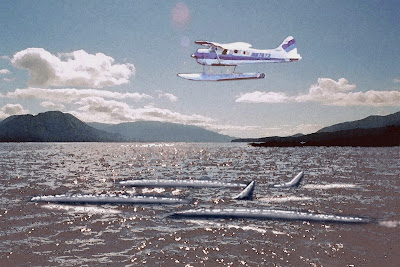 
Earlier tonight, I watched with great interest on ITV the episode of Jeremy Wade's 'River Monsters' series in which he investigates - and even tries (albeit unsuccessfully) to catch - one of the monster fishes said to inhabit the deep, freezing waters of Lakes Iliamna and Clark in Alaska. He concludes that the likeliest identity for such creatures, should they exist, would be extra-large (up to 20 ft or so long) specimens of land-locked white sturgeon. Giant sturgeon have been confirmed in the past as the identity of certain formerly-mysterious lake monsters in various North American bodies of freshwater (including Lake Washington in Seattle), so this is certainly a plausible solution to the Iliamna and Clark monsters too. Here is what I wrote a few years ago concerning them within an article of mine devoted to aquatic monsters of North America:


THE ILLIES OF ILIAMNA
Compared to such famous North American ‘monster’ lakes as Okanagan and Champlain, Lake Iliamna remains little-known and little-investigated. This is due in no small way to its location – ensconced in southwestern Alaska. In terms of size, however, it can scarcely be overlooked – as large as the state of Rhode Island, this lake measures a very impressive 120 km long, up to 35 km wide, and has a surface area of around 2600 square km. Moreover, the unidentified water beasts, popularly dubbed Illies by the media and cryptozoologists, reported from its waters are equally memorable. Not only are they decidedly large – often claimed to be as much as 10 m long – they are also very different from the many-humps and long-necks more commonly reported from North America’s inland waters.

Long known to the area’s Inuit/Aleut people, who refer to this cryptid as jig-ik-nak, the Illie is usually described as very long and quite slender, greyish in colour, and with a noticeable dorsal fin marked by a white stripe. It swims just beneath the water surface, sometimes in groups, but unlike a number of other lake monsters it does not come up for air, remaining submerged, and therefore seemingly able to breathe underwater, like a fish rather than a mammal or reptile. This was confirmed in 1963 by a biologist from the Alaska Department of Fish and Game, who watched an 8-10-m-long creature swimming beneath the water surface for over 10 minutes, during which time it never once surfaced.

In 1977, air-taxi pilot Tim LaPorte and his two passengers saw from the air a dark 4-5-m-long animal whose back was just breaking the water surface. When it dived downwards, it revealed a large vertical tail – characteristic of fishes, as whales have horizontal tails.

There seems little doubt that the Illies are indeed fishes, albeit exceptionally big ones, and the most popular identity is a sturgeon, in particular the mighty white sturgeon Acipenser transmontanus, which is known to attain lengths of up to 7 m. Although sturgeons have never been confirmed from Lake Iliamna, they are known from other, smaller Alaskan lakes (Iliamna is the largest lake in Alaska). Consequently, it would not be implausible for this immense body of water to house such fishes too, and for them, on account of the lake’s huge size and the plentiful food supply that it is known to contain, to attain record sizes here.
Posted by Dr Karl Shuker at 21:15