I SHALL GARB MYSELF IN GOSSAMER... 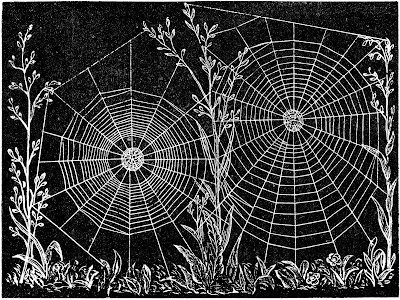 I shall garb myself in gossamer,
And dance amid the darkness,
Silver in the shadows of my song.

Even though I have spent more than a quarter of a century uncovering, investigating, and documenting bizarre reports from the sequestered but ever-fascinating realms of unnatural history, there are countless others still out there waiting to delight and bemuse me. One such example was very kindly brought to my attention a couple of days ago by Mark North of Dark Dorset, and is unlike any that I had previously encountered.

It was published in volume 1 (January-June 1892) of the journal Notes and Queries, Eighth Series, and was penned by John Symonds Udal, who at that time was Attorney-General and Admiralty Advocate of Fiji. This remarkable account reads as follows:

"DRESS MADE OF SPIDERS' WEBS (7 th S. xi. 445; xii. 34). MRS. WHITE mentions as a great curiosity the dress made from spiders' webs presented to the Queen by the Empress of Brazil in 1877. Most certainly it is, and to most British minds such a thing might seem incredible ; but if your correspondent were to visit Fiji which is famous for its magnificent spiders he might perhaps have less cause for wonder. The web made by the big yellow spider here is very large and strong ; but in addition to the web proper, in which flies, mosquitoes, &:., are caught, it spins a cocoonof orange-coloured, silky, gossamer-like stuff, which, if taken up in the fingers, requires quite an effort to break. This stuff I can conceive might be woven into material for a dress. Might not the dress in question have been composed of similar material made by the Brazilian spiders?

"I can hardly, even now, believe that it could have been composed of what we understand to be the ordinary spider's web. I can quite imagine, however, that such a material might be of some commercial value, as one frequently hears complaints at the present day of a want of fineness in fibres or materials used for scientific purposes.

"I may add that our cockroaches are huge too; but, by a merciful dispensation of Providence, our spiders are in proportion. The particular enemy of the cockroach here is not the big yellow spider above mentioned, but a long-legged, formidable looking brown spider, called the "hunting spider." I cannot find out that this species spins any web, but apparently depends upon its great activity for securing its prey. I know, however, that it can bite pretty sharply, as I once saw one draw blood from the finger of a doctor friend of mine who was capturing it for me. It is often to be seen hugging a large, flattened, circular, cream-coloured bag, which, I take it, contains its eggs. We never kill spiders in Fiji. The natives venerate them as much as the Dutchman does his stork, and perhaps with more reason.


"P.S. Since writing the above I have been told by a friend of mine here that on one occasion he had carefully examined the long line stretched between two points from which the web of the big yellow spider mentioned above was suspended, and found it had a beautiful golden silky appearance, and was so strong that he was able to wind it round a piece of cardboard. If this can be considered part of the web proper, then in all probability a light, silky material could be woven from it, and the Brazilian dress be not quite so extraordinary as at first sight it might appear."

Sadly, as my knowledge of Fijian and Brazilian arachnids is not extensive, I am unable to identify the species involved here - so if anyone reading this could offer any suggestions, Mark and I would be very happy to receive them.

Incidentally, the lines opening this blog are a fragment of verse from an as-yet-unfinished poem of mine entitled 'Spider of the Night' - inspired in turn by the evocative title of a very popular tango (as opposed to a tarantella!), a version of which I have now uploaded onto YouTube, which can be accessed here.
Posted by Dr Karl Shuker at 00:19