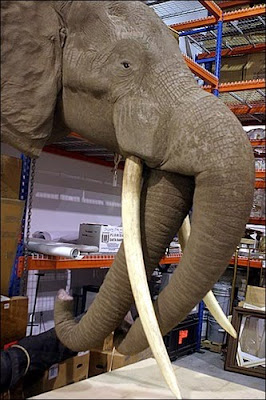 As an ardent collector of data appertaining to zoological freaks, caprices, and monsters of the teratological kind, two of my fondest longstanding daydreams have focused upon the discovery of an elephant with two trunks and a camel with three humps. Naturally, however,, I never seriously expected to fulfil either of them, as I'd always assumed such fanciful beasts to exist only in the most fevered of imaginations. But not any more!

When chatting recently on Facebook to fellow teratophile Markus Bühler, I was astonished to learn that he had encountered a photograph of a supposed two-trunked elephant in one of the many Ripley's Believe It Or Not! books, and that he had read of reports of extra-humped camels too. Needless to say, with an alacrity that would surely have impressed even Sherlock Holmes (had he actually existed, of course!), I was soon hot on the trail of Ripley's proboscis-advantaged pachyderm, and, lo and behold, Markus was absolutely correct!

On 5 November 2005, Christopher Elliott had posted a short blog at: http://www.npr.org/templates/story/story.php?storyId=4989709 entitled 'Inside the Ripley's Warehouse of Oddities', and he had included a photo that he had snapped of the stuffed head of an adult African elephant...with two trunks! According to Christopher Elliott: "Apparently both of this elephant's two distinct trunks were fully functioning".

Although, teratologically speaking, the development of a double trunk is not impossible - such an appendage could theoretically arise if, during the elephant's embryogeny, the region of developing tissue giving rise to the trunk had split - it must also be borne in mind that there are some exceedingly gifted taxidermists out there, who, down through the ages, have created all manner of very convincing fake beasts. Whether the Ripley's specimen (which I hereby dub 'Two-Trunks') is genuine (as they believe it to be) or not, however, it is undeniably a truly remarkable exhibit - if only because, following all the countless jokes in the past about the elephant being the only creature capable of making a trunk call, this particular specimen may well have been the only elephant able to reverse the charges!! 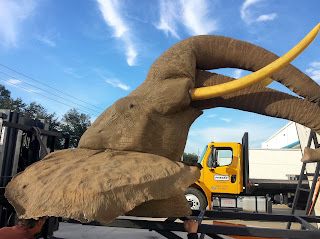 As for extra-humped camels: there is at least one serious claimant on record. Normally, the Bactrian camel has two humps and the Arabian camel or dromedary has one. Moreover, hybrids of these two species also only have one - not three, as may perhaps have been expected. However, as camel humps are merely reservoirs of fatty tissue, I see no reason why additional reservoirs might not occasionally develop, thereby yielding extra humps, especially if the typical humps were smaller than normal, thus providing room for extra ones to form alongside them. And indeed, Markus mentioned that he recalled reading something about bona fide extra-humped individuals in the highly authoritative, 13-volume series of multi-contributor zoological encyclopedias from the 1970s entitled Grzimek's Animal Life Encyclopedia, whose editor-in-chief was the eminent German zoologist Dr Bernhard Grzimek. As the proud possessor of a complete set of these very hefty but beautiful, fact-filled tomes, I lost no time in perusing the camelid section in Volume 13, Mammals IV. And sure enough, there was the following short but fascinating passage:

I have yet to trace any additional data regarding this or any other extra-humped camel, but the wording of the above passage clearly indicates that others have existed. What I did discover while searching online, however, was a report from Qatar that initially seemed to be a genuine vindication of the following popular children's joke - 'What do you call a camel with three humps? Humphrey!'.

On 27 January 2010, a contributor with the screen name edifis posted here on the website QuatarLiving.com the following report:

A 3 Humped Camel suspected to be the result of inter breeding between the 2 humped Bactrian camel and the Arabian Camel has been recently spotted near Dukhan.
The strange creature, a huge bull is reported to have been roaming in the vicinity of Dukhan and Umm Bab and is desperately looking for a mate.
But local female camels are avoiding him as he is an extra long stretch camel with 3 distinct humps, having different colors.
Anybody up to the task may contact the Camel breeding center at Al Shahanyia for more details:
Here is the picture of the Bull in heat. 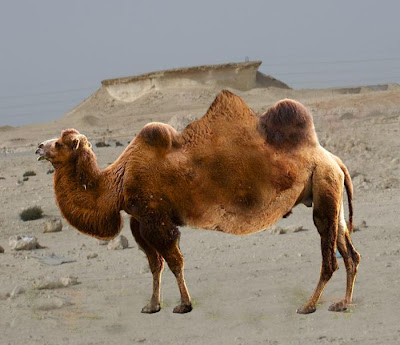 Sadly, as you can see from the photograph, the creature in question evidently owes its origin not to any humorous whim of Mother Nature but rather to the skills of someone versed in computer-generated imagery, most probably using either Adobe Photoshop or Corel Draw - as the first of many comments posted beneath the photo by readers was swift to point out. Never mind - it was good while it lasted.

Incidentally, during my futile search for a real Humphrey, I found a much more convincing but equally fallacious photo of a triple-humped camel on Mrs. God's Blog here. Click here for the image.

I also discovered that there is a rock band hailing from South Australia called Three Humped Camel. Whoever said that the Internet is not educational

Interested viewers recently had the chance to observe the bi-nasal wonder that is Two-Trunks when on 19 November 2014 it was placed on public display at the IAAPA (International Association of Amusement Parks and Attractions) 2014 Convention in Florida. And earlier in the year, it had been exhibited by the Ripley's Museum in Baltimore, Maryland. My grateful thanks to Mr G.J. Williams and Ms Patty Harbort for this information, and also to mr Williams for kindly permitting me to include some of his pre-convention photographs of Two-Trunks here. 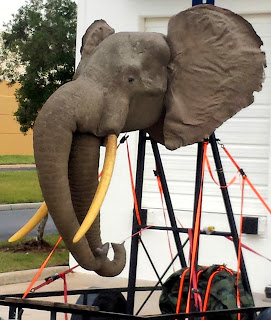 Two-Trunks photographed just prior to being exhibited at the IAAPA ((c) G.J. Williams)