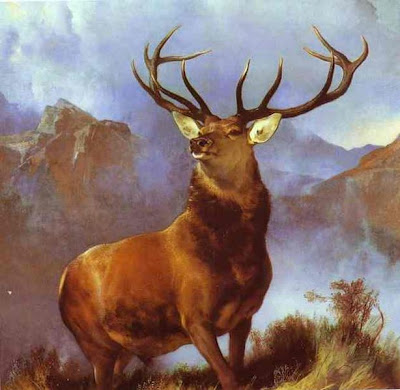 'The Monarch of the Glen' - Sir Edwin Landseer
Among the perissodactyls (odd-toed ungulates), there are many fully-attested cases of interspecific hybridisation, the most familiar examples being the mules and hinnies that result from successful matings between the domestic horse Equus ferus caballus and the domestic donkey E. africanus asinus. Many verified interspecific hybrids have been documented among the artiodactyls (even-toed ungulates) too, as well as some confirmed intergeneric hybrids. Moreover, I even have a few controversial reports on file of artiodactyls specimens that have been claimed at one time or another to constitute interfamilial hybrids.

Perhaps the ultimate in ungulate hybrids, however, is an extraordinary specimen that, if genuine, links two entirely separate taxonomic orders - the perissodactyls with the artiodactyls!

The English artist Sir Edwin Landseer (1802-1873) is rightly celebrated for his many magnificent paintings and drawings of animals, one of the most famous being ‘The Monarch of the Glen’ – see this ShukerNature post’s opening illustration – portraying a handsome red deer Cervus elaphus stag. Much less familiar, yet exceptionally intriguing from a zoological standpoint, conversely, is his drawing of a seven-month-old animal reputed to be a cross between a New Forest pony and a red deer!

According to a note on this amazing creature by naturalist Brian Vesey-Fitzgerald in the British monthly magazine Animal Life (December 1963), its identity as a bona fide horse-deer was supported by many people who examined it while alive, and its mare mother was seen running with red deer for several months prior to the birth of her highly contentious offspring. Nonetheless, Vesey-Fitzgerald remained highly sceptical of its reputed hybrid status, which is hardly surprising. The genetics of species belonging to two separate mammalian orders are so different from one another that the chances of a viable offspring being produced naturally by such species are exceedingly slim.

In these days of instant information access, I naturally anticipated little if any problem in locating an online image of this very thought-provoking drawing by Landseer, but all attempts by me to do so have failed. Not even the might of Google has been able to assist me in my quest. Consequently, as I would very much like to view it and thus decide for myself whether the depicted creature may indeed be a veritable horse-deer, I would be exceedingly grateful for any information as to where images of this drawing exist online, and also for any additional details regarding the animal itself.

Curiously, Google did throw up one tantalising reference that may (or may not) have some bearing upon this subject. Namely, Queen Victoria’s precise instructions to Landseer concerning the content of a painting that she was commissioning him to prepare in 1850 of herself and her consort Prince Albert at Royal Deeside in the Scottish Highlands. They read as follows:

“It is to be thus: I, stepping out of the boat at Loch Muich, Albert in his Highland dress, assisting me out, and I am looking at a stag which he is supposed to have just killed. Bertie [their son, the future King Edward VII] is on the deer pony with McDonald...standing behind, with rifles and plaids on his shoulder. In the water, holding the boat, are several of the men in their kilts, - salmon are also lying on the ground. The picture is meant to represent me meeting Albert, who has been stalking, whilst I have been fishing, and the whole is quite consonant with the truth. The solitude, the sport, the Highlanders and the water, etc will be...a beautiful exemplification of peaceful times, and of the independent life we lead in the dear Highlands. It is quite a new conception...It will tell a great deal, and it is beautiful.”

The resulting painting was “Royal Sports on Hill and Loch”, which first appeared at the Royal Academy in 1854, and is reproduced below. Yet the animal upon which Bertie is sitting clearly resembles a normal pony in every way, as opposed to a bona fide intergeneric deer pony. 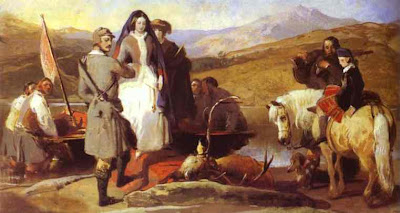 Having said that, could it be that the term “deer pony” as used by Victoria with regard to Bertie’s steed merely signified that it was a pony that regularly featured in deer hunts at Royal Deeside, rather than having any taxonomic implication or significance? In other words, if you’ll forgive the zoological mixing of metaphors, is this simply a red herring, with no relevance to Landseer’s elusive drawing of an alleged horse-deer hybrid?

Once again, if you have any views, information, or pertinent image links, please do post them here on ShukerNature. Thanks very much!