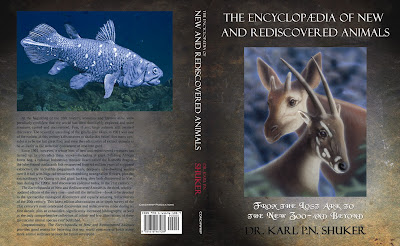 I've just received, one day early, the perfect birthday present! Here's the fully-approved, finalised version of the cover for my soon-to-be-published book The Encyclopaedia of New and Rediscovered Animals: From the Lost Ark to the New Zoo - and Beyond (which is off to the printers in the next few hours!). My very sincere thanks to Bill Rebsamen for his wonderful front and back cover illustrations!

Here's some information concerning my book:

At the beginning of the 20th century, scientists and laymen alike appear to have been peculiarly confident that the world had been thoroughly explored and most of its creatures named and documented. Few, if any, large animals still awaited discovery. The scientific unveiling of the giraffe-like okapi in 1901 was one of the earliest of this century's discoveries to shake this belief. But many consider it to be the last great find, and view the rediscovery of extinct animals to be as likely as the alchemic conversion of iron into gold.

Since 1901, however, a whole host of new and rediscovered creatures has turned up to contradict these views - including a giant 7-ft-long forest hog from Africa, a colossal Indonesian monitor lizard called the Komodo dragon, the lobe-finned coelacanth fish resurrected from 64 million years of supposed extinction, the incredible megamouth shark, deep-sea tube-dwelling worms over 8 ft tall with huge red tentacles resembling strange alien flowers, plus the extraordinary Vu Quang ox and giant barking deer both discovered in Vietnam during the 1990s. And discoveries continue to be made today, in the 21st century - ranging diversely and dramatically from giant peccaries and zombie worms to an entire new suborder of insects known as the gladiators, a veritable jungle of new monkeys, and an extraordinary chameleonesque snake. And nor can we possibly forget the sensational rediscovery in North America of the near-legendary, supposedly long-extinct ivory-billed woodpecker.

The Encyclopaedia of New and Rediscovered Animals is the third, wholly-updated edition of the very first - and still the definitive - book to be devoted to the spectacular zoological discoveries and equally amazing rediscoveries of the 20th century, which attracted international acclaim and exemplary reviews following its original publication in 1993 (when it was entitled The Lost Ark), and its subsequent republication in 2002 as an updated, greatly-expanded second edition (entitled The New Zoo). This latest edition also contains an in-depth survey of the 21st century’s most celebrated discoveries and rediscoveries made during its first decade, a superb foreword by pre-eminent American cryptozoologist Loren Coleman, plus an exhaustive, significantly-increased bibliography, as well as the only comprehensive collection of colour and b/w illustrations of these spectacular animal species ever published (including new, previously-unpublished photographs, and several exclusive, specially-commissioned full-colour paintings).

Unquestionably, The Encyclopaedia of New and Rediscovered Animals provides good reason indeed for believing that our world continues to holds many more animal surprises in store for future revelation.

It is published by Coachwhip Publications in the USA, and is due out very shortly (printers permitting!) - so keep checking Amazon!
Posted by Dr Karl Shuker at 01:45

Email ThisBlogThis!Share to TwitterShare to FacebookShare to Pinterest
Labels: cryptozoology, karl shuker, new and rediscovered animals, ShukerNature, The Encyclopaedia of New and Rediscovered Animals, The Lost Ark, The New Zoo