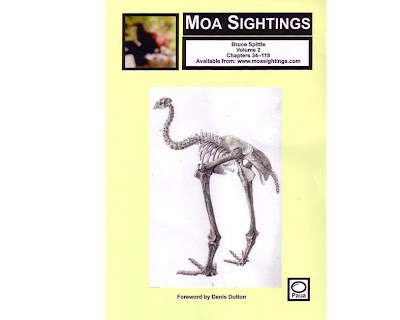 My review of: Moa Sightings (Volumes 1-3) by Bruce Spittle.

With such terms used so frequently yet all-too-often so undeservedly nowadays, it is rare indeed today for a book to warrant being referred to as 'the standard work' or 'the definitive treatment'. Both of these superlatives, and many others of a similar nature too, however, are fully-justified when considering Bruce Spittle's monumental three-volume treatise on putative sightings of living moas – if only because I simply cannot conceive how anyone could ever produce a more comprehensive account of this subject.

The giant, and not-so-giant, moas constituted a diverse family of flightless birds unique to New Zealand, but according to mainstream scientific belief most if not all of the eleven currently-recognised species had become extinct at least 300 years prior to the landing here of the first Europeans with Captain Cook in 1769. And even if a few stragglers had somehow lingered on in remote localities up to and even for a time beyond this initial European influx, these had still died out long ago – or had they? 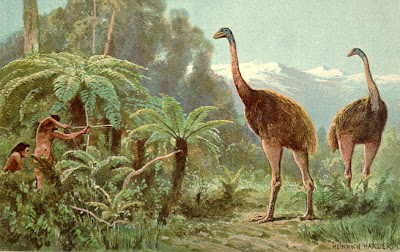 In his vast, exhaustively-researched trilogy of tomes, Spittle painstakingly documents and assesses every known eyewitness report alluding to possible moa survival since the early 1400s, devoting an entire chapter to each such report, and including 151 reports in total. Each chapter follows the same format – a headline giving the eyewitness, the year, and the location of the alleged sighting, which is then followed by an introduction, a detailed account of the sighting, and a thorough discussion. Each report is also accompanied by one or more full-page colour maps of the location, plus various relevant colour or b/w illustrations, including many previously obscure images that were new to me. The same, exceedingly detailed index is included at the back of all three volumes, which is very handy.

The degree of scholarship evident in the sightings' discussions is breathtaking – Spittle gives the impression of having consulted everyone ever involved in and everything ever written on the subject of moas (and if he hasn't, it clearly isn't from want of trying!) - and his examination of each sighting is both incisive and commendably objective. Nowhere is this more apparent than when Spittle surveys the two most famous (and contentious) putative moa sightings of all - one (Sighting Report #22) by Alice MacKenzie at Martins Bay in 1880, to which he devotes 98 pages; and the other (Sighting Report #151) by Paddy Freaney and two companions in 1993 within Craigieburn Forest Park, to which he devotes no fewer than 283 pages (taking up most of Volume 3, in fact), and which include several detailed maps and even full-colour reconstructions based upon the enigmatic, famously-fuzzy photo snapped by Freaney. In each case, Spittle produces a review so meticulous and fascinating that it would stand alone very well as an entire book in its own right. 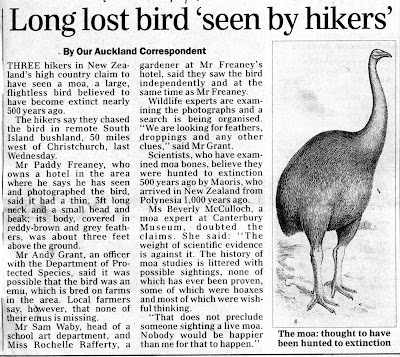 Every report is also liberally annotated with footnotes supplying key references (there is no collective bibliography – perhaps this work's only failing in my view) and additional information where required.

I dare not even begin to guess how long it took Spittle to produce his magnum opus, which Moa Sightings assuredly is, but when preparing any work as extensive as this, errors of typography and of fact are inevitable, however earnestly one seeks to eradicate all such gremlins from the final version, and I did spot certain instances of this in Moa Sightings. Needless to say, I do not wish to overshadow or diminish the magnificent overall contribution to the field of moa study and beyond that this work has made, so two such examples of errors, one from each of the above-noted categories, will suffice here. 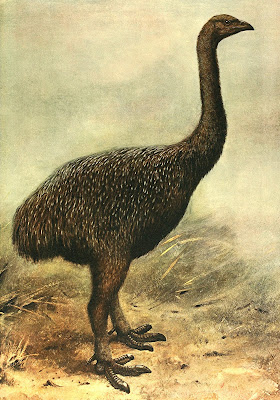 Upland (dwarf) moa, Megalapteryx - did Alice MacKenzie encounter one at Martins Bay in 1880?

In all three volumes, the outer edge of each page contains three figures – the top one indicates the volume number, the middle one the chapter number, and the bottom one the page number within that chapter (this is also repeated in expanded version at the bottom of each page). Unfortunately, however, in Volume 2, Chapter 35 is incorrectly labelled as being in Volume 1. Ditto for Chapter 137 in Volume 3. These could easily be rectified in future reprints. As for factual blips: I noticed on p. 189 of Chapter 151, dealing with the Freaney sighting case, that Spittle claimed a letter by him sent to the British magazine Fortean Times updating that case was never published. In fact it was – twice! It first appeared on p. 54 of the Letters section in FT No. 98 (May 1997), and then it was summarised by me on p. 16 of my Alien Zoo column in FT No. 221 (April 2007). 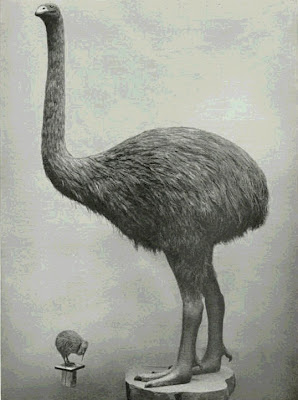 Never mind. Such slips as these pale into insignificance against the greater backdrop of a truly extraordinary publication that is unquestionably one of the finest additions to the canon of cryptozoological literature in modern times. The price might seem steep, and may limit the numbers sold, especially to private individuals, but I do feel that it is fully justified with respect to what it purchases.

As a final thought, I just hope that there isn't someone else out there still working away on their own in-depth coverage of reputed sightings and encounters of living moas – because, now that Spittle's Moa Sightings is in print, I'm afraid you're too late! 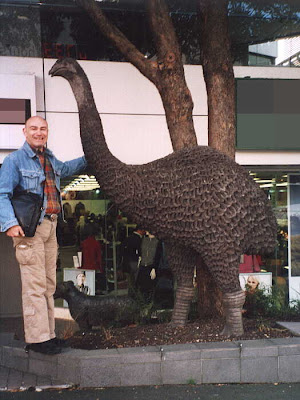 Standing alongside a life-sized Dinornis moa statue in Auckland, when I visited New Zealand in 2006 (Dr Karl Shuker)