I’m always pleased to receive an update of an ostensibly long-forgotten cryptozoological story, especially when it’s a personal favourite of mine, like this one.

As reported by Heuvelmans, myself, and others, back in 1953 a Tibetan lama called Chemed Rigdzin Dorje Lopu announced that he had personally examined the mummified bodies of two yetis – one at the monastery at Riwoche in the Tibetan province of Kham, the other in the monastery at Sakya, southern Tibet.

Reconstruction of the yeti (Michael Playfair)

According to Heuvelmans’s account of this lama’s very interesting claim:

They were enormous monkeys about 2.40 m high. They had thick flat skulls and their bodies were covered with dark brown hair about 3 to 5 cm long. Their tails were extremely short.

The thought that such extraordinarily significant cryptozoological relics (if genuine) may still survive today has long intrigued me. Consequently, I was delighted when on 13 February 2010 I was contacted by correspondent Peter Pesavento who informed me that he had been actively pursuing this mystery himself, and had emailed both monasteries. Unfortunately, he did not receive a reply from Sakya, but Samten O’Sullivan had very recently replied to him on behalf of Riwoche.

Reconstruction of the yeti (Richard Svensson)

Samten informed Peter that, tragically, the monastery had been razed to the ground following China’s annexing of Tibet and all of its precious contents had been looted or burnt. Consequently, although the monastery was subsequently rebuilt (and as an exact replica of the original), any yeti mummy that may have been in the original building is certainly not present in the new one. Whether it was removed and taken elsewhere or simply destroyed, however, is another matter, which seems unlikely ever to be resolved.

Nevertheless, even knowing where something is not (namely, in the new Riwoche monastery) is still better than knowing nothing about it at all.

Reconstruction of the yeti (Tim Morris)

And if they have survived and are one day rediscovered, how fascinating it would be (judging at least from his revelation on tonight's Channel 4 television programme 'Bigfoot Files' regarding yeti hair DNA) if DNA could be extracted from them and examined by expert geneticist Prof. Bryan Sykes from Oxford University. Then at last we would finally know what these mysterious 'mega-monkey' mummies really were.

This ShukerNature blog is excerpted from my book Karl Shuker's Alien Zoo (2010), soon to be available from CFZ Press as an e-book! 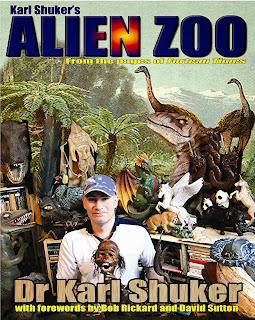