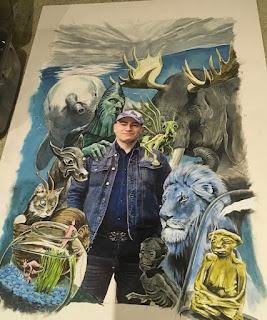 Due to some recurrent internet-connection problems during the past few days, I omitted to mark a memorable day in the history of my ShukerNature blog – its eighth anniversary, which occurred on 20 January 2017. So, better late than never, I am doing so now – by presenting herewith the very first sneak preview of my next book, which is none other than the long-awaited, long-promised compendium of some of my blog's most unusual and popular articles. Or, to put it another way – welcome to ShukerNature: The Book - or, to give it its full title, ShukerNature Book 1: Antlered Elephants, Locust Dragons, and Other Cryptic Blog Beasts.

My blog was scarcely two years old when, after asking among my many Facebook friends and colleagues whether a compilation volume of some of my blog articles would be of interest to them, I received a resoundingly positive response. And so I began planning it accordingly, alongside various other writing projects. However, as sometimes happens, life – and death – had other plans for the direction in which my future would take. Or, as my wise little Mom used to remind me gently if I railed against my dreams and ambitions faltering or falling into disarray: "Man proposes, but God disposes" (which is a translation of the Latin phrase 'Homo proponit, sed Deus disponit', from Book I, chapter 19, of The Imitation of Christ by the German cleric Thomas à Kempis).

And so it was that my ShukerNature book was set to one side, and other projects that for one reason or another needed to take precedence were duly completed and published in its stead. Notable among these were my second, long-planned, and extremely comprehensive dragons book – Dragons in Zoology, Cryptozoology, and Culture; a wide-ranging compilation of my most notable Loch Ness monster writings – Here's Nessie!; and of course my massively-enlarged, fully-updated prehistoric survivors book – Still In Search Of Prehistoric Survivors.

These are all now published, and in the meantime the very many additional blog articles that I have continued to research, write, and post each year have provided me with an immensely expanded list of possible examples to include in my eventual ShukerNature compendium. And now, at last, much of this book is indeed written – all of the main text, in fact, barring any last-minute changes or additions – and it will be published later this year.

Moreover, I am both thrilled and delighted that its front cover artwork is being produced by none other than a longstanding Facebook friend who is also a brilliant artist – Anthony Wallis. I am very lucky that no fewer than three of my previous books' front covers are graced by spectacular artwork that has been either produced (two) or co-produced (one) by Ant. Namely, Mirabilis (2013), The Menagerie of Marvels (2014), and Here's Nessie! (2016) (this last-mentioned book's front cover featuring both a very vibrant long-necked seal reconstruction of Nessie by Ant and a beautifully evocative plesiosaurian monsters by moonlight scene by Wm Michael Mott).

So here, opening this present ShukerNature blog article as a first glimpse of ShukerNature Book 1, is an early version of Ant's wonderful front-cover artwork for it – thank you so much, Ant, for bringing to life so vividly and with such incredible skill a unparalleled diversity of obscure, hitherto-overlooked, but effortlessly spellbinding mystery beasts that will not be found together in any other book. And so, the countdown to its publication has begun – the wait will soon be over… 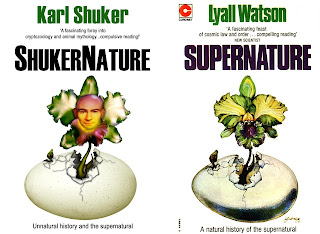 An affectionate illustrative pastiche (left) by another longstanding artist friend, Mark North, inspired by and in tribute to the classic front-cover artwork of the international non-fiction bestseller Supernature (right), written by Dr Lyall Watson and first published in 1973, whose title partly inspired the naming of my blog – click here for more details (© Lyall Watson/Coronet Books / © Mark North)