SHEDDING LIGHT ON (AND BY) THE SEA MOUSE - FURRY BODY BUT LOTS OF LEGS! 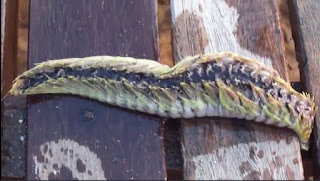 Photo-still from online video clip whose 'mystery creature' is simply a species of polychaete worm, quite probably allied to the sea mouse (© ownership of video clip currently unknown to me – photo-still included here on a strictly non-commercial Fair Use basis only)

In recent times, several correspondents have drawn my attention to a brief video clip in gif format circulating widely online (view it here, for instance, where it was posted on 4 September 2016). The source of the photo-still that opens this present ShukerNature blog article, the video clip showcases in close-up a most intriguing sea creature, not very big but very distinctive nonetheless. No information accompanies the clip, however, so what could the animal be? Many different identities have been proposed online, some decidedly imaginative, but in reality this putative cryptid is merely a polychaete worm, and may well be allied to a particular favourite one of mine - namely, a certain many-legged mouse mimic from the marine world, and to which the remainder of this article is now devoted.

In stormy weather, the sea may throw up onto coastal beaches a truly amazing little saltwater denizen that often fools the unwary observer. At first sight, it resembles a large, fat, wet mouse, around 4-8 in long and 3 in wide, covered in what looks like soft greyish-brown fur. And as it creeps across the sand, it moves quite like a mouse too. Yet closer observation will reveal that it does not have any kind of readily recognisable head. Nor does it have a real mouse's familiar long thin tail. 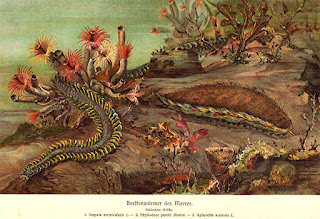 The biggest surprise will come, however, if the observer should attempt to pick up this animal, because if he does, and then turns it over onto its back, an incredible surprise will be exposed. Instead of having just four legs, this amazing animal has lots and lots - all in pairs that run down the whole length of its body. Moreover, it has a pair of short tentacles at the front of its body, and its two eyes are on stalks.

For this is not a mouse at all, but is actually a truly extraordinary type of polychaete sea worm. Instead of being long and very thin like many such worms, however, it is squat and fat, and because of its deceptively mouse-like fur and movements, it is known scientifically as the sea mouse. There are many species, most of which belong to the genus Aphrodita, and frequently occur in the North, Mediterranean, and Baltic Seas, and in the Atlantic Ocean. The most familiar species, and the one described and dealt with predominantly by me here, is the common sea mouse Aphrodita aculeata, which is regularly encountered around Britain's coasts. Also well known is the southern sea mouse A. australis, but this aptly-named species exists much further afield, being native to coastal waters around southern Australia and New Zealand. 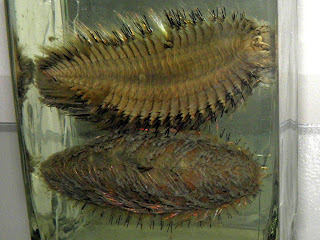 Southern sea mice – one displayed ventrally (above), the other one dorsally (below) (public domain)

Belonging to the polychaete class of annelids or segmented worms, the sea mouse's closest relatives include the lugworm, the fanworms, and the many-legged ragworms that live in the sea, and under normal conditions it lives in burrows in shallow coastal waters, but some specimens have also been found at depths of almost 10,000 ft. And whereas mammalian mice are generally herbivorous, this marine namesake is an active nocturnal carnivore, remaining half-buried in sand and devouring unsuspecting small crabs and even other polychaete worms that stray within its predatory reach, including specimens much longer than itself.

As for the sea mouse's 'fur', this is actually a mass of soft felt-like bristles called setae, covering several pairs of scales that in turn cover its back. These scales protect its gills, with which it breathes, extracting oxygen from water pumped by its own muscular activity into its burrow, and the setae prevent the gills from becoming clogged with sand. The setae at the edges of the sea mouse's body are normally deep-red, not greyish-brown like those on its back, but they will gleam brightly with vivid blue and green stripes whenever sunlight falls directly upon them – a spectacular structural colouration effect achieved by numerous hexagonal cylinders within these peripheral setae, and performing far more efficiently than man-made optical fibres, as revealed by research published in 2012. Moreover, this very eyecatching activity in turn constitutes a highly effective defence mechanism, because it startles and thereby warns off potential predators of the sea mouse – all of which is something that not even the fur of the cleanest mammalian mouse can ever accomplish! 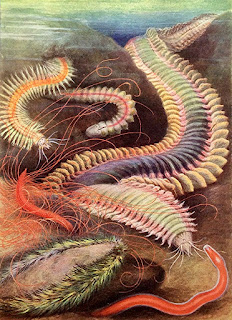 Beautiful colour illustration by okapi-discoverer Sir Harry Johnston depicting a selection of marine worms, including a sea mouse at the bottom-left corner, from Marvels of the Universe, Vol. 2 (1927) (public domain)