ARE GIANT FLIGHTLESS RAVENS SOMETHING TO CROW ABOUT IN CANADA? 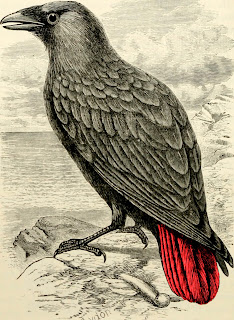 What better way for ShukerNature to begin 2017 than with a hitherto little-known mystery beast – so here is one right now!

On 28 March 2012, French cryptozoological correspondent Raphaël Marlière kindly brought to my attention the following intriguing report that he'd recently seen on the Cryptodominion website (click here). It may well be mere folklore - then again, it just might be something more. 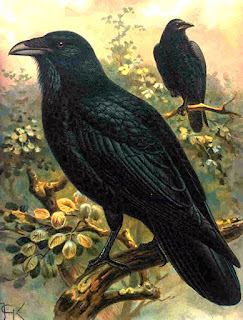 According to Cryptodominion, loggers who have worked in the interior of British Columbia, Canada, assert that an isolated, timber-rich valley exists here that is inhabited by huge ravens, bigger even than golden eagles, but virtually flightless, and further distinguished from normal ravens Corvus corax by their tail plumage, which exhibits a noticeable amount of red pigmentation. Apparently, these mystery red-tailed mega-corvids are very dangerous and opportunistic, not hesitating to wreck a campsite.

Lumberjack folklore is renowned in North America for its tall tales of exotic fauna (variously dubbed fierce or fearsome critters) – everything from fur-bearing trout to spiky-furred cactus cats – so this may simply be a less familiar variant. Nevertheless, if anyone out there has any additional information concerning such birds, I'd be very interested to receive details. 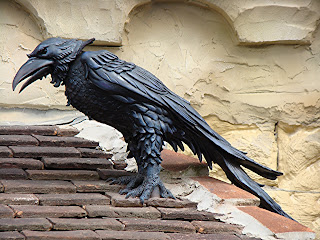 Elegant raven sculpture at the Raveleijn theatre in Efteling, a fantasy-based theme park at Kaatsheuvel, in the Netherlands (public domain)