It may be the town in which I was born, but West Bromwich in the West Midlands, England, is more readily associated with football, courtesy of West Bromwich Albion FC, than cryptozoology - until the Sandwell Valleygator came on the scene, that is, as now recalled in this ShukerNature retrospective.

Also nicknamed the Sandwell Snapper in early media accounts and initially likened to a crocodile, caiman, or alligator, this elusive aquatic cryptid first reared its snouted head on 30 March 1999. That was when fisherman Mike Sinnatt saw what he initially thought to be "a marvellously shaped piece of wood", measuring over 2 ft long, suddenly come alive and attempt to seize an unsuspecting Canada goose on Swan Pool. 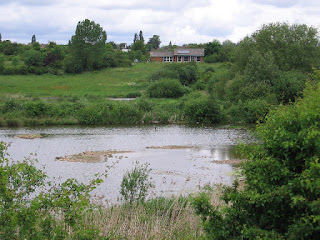 Situated in an RSPB (Royal Society for the Protection of Birds) reserve within the Sandwell Valley Country Park - a verdant oasis for nature right in the heart of urbanised West Brom - Swan Pool measures more than a mile in circumference, and is not only inhabited by a rich variety of waterbirds but also is popular for angling, yachting, and wind-surfing.

Or at least it was until, within a short time of Sinnatt's sighting, a dozen other similar reports had surfaced, all describing a fairly sizeable four-legged aquatic beast with a notable snout, long tail, and a penchant for snapping at anything avian or piscean that came too near. Eyewitnesses included local angler Tony Price and pool lifeguard Ricky Downes, who spied its two "very chunky" hind legs and tail. 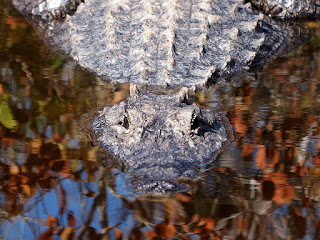 Was an alligator lurking in the Sandwell Valley?? (public domain)

Occurring so close to the beginning of April, the Sandwell Valleygator was originally dismissed by sceptics as a hoax, but this was strenuously denied by Sandwell Council, who were so concerned about the potential danger posed to the general public by the creature that they closed the pool to all watersports throughout the Easter Bank Holiday (3-6 April 1999). Needless to say, however, the considerable media publicity generated not only locally but also nationally and even internationally by Swan Pool's stealthy snapper resulted in a massive influx of visitors here (estimated at more than 9,000) during the Bank Holiday, all eagerly scanning the reed beds and shallows in search of its cryptic alligatorian (or crocodilesque?) interloper.

As I deemed it highly unlikely that the creature would appear when confronted by such a barrage of human activity, however, I waited until the holiday period was over before visiting Swan Pool myself. Walking around this sizeable lake, peering at the large island present at its centre, at the smaller pools and marshes fringing its border, and down into its murky depths, it swiftly became evident that an aquatic creature of the proportions described by the Valleygator's eyewitnesses could live out a secluded, rarely-spied existence here indefinitely. 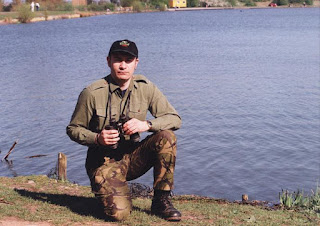 Yet although neither the Valleygator itself nor any convincing reports of it surfaced during the Bank Holiday or my own subsequent visit, official opinion as to its identity had by now veered away from the scenario of a vicious snap-happy crocodile, caiman, or suchlike to the rather more placid scenario of a giant salamander. Specifically, the North American hellbender Cryptobranchus alleganiensis, which measures up to 30 in long, subsists upon small animal life such as frogs, fishes, snails, crustaceans, and insect larvae, and is native to the eastern United States.

Such a beast could certainly survive, therefore, in the prey-filled, temperate waters of Swan Pool. However, the fatal flaw in this otherwise promising proposal is that unlike certain crocodilian species the hellbender is hardly ever maintained in captivity by private individuals, especially in Britain. So the chance of one having escaped (or been deliberately released) and taken up residence in Swan Pool is extremely remote. 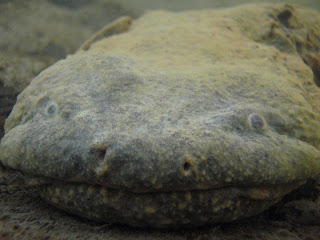 Head-on with a hellbender (public domain)

On 7 April, Swan Pool was formally re-opened, with the Sandwellmander, as it had by now been redubbed in media accounts, no longer deemed to pose a risk to watersport enthusiasts. Or, to quote from a local newspaper report the optimistic words of Sandwell's senior countryside ranger Roy Croucher: "We have decided to re-open the pool on the basis that this thing is not going to leap out of the water and grab someone around the throat".

Less than a week later, however, an unexpected water beast did make an appearance - a North American common snapping turtle Chelydra serpentina, discovered sunbathing on a marsh close to Swan Pool. As its name suggests, this belligerent, sturdy species of freshwater tortoise is famous for snapping viciously, possesses a prominent snout, a long tail, and can grow up to 2 ft long (its close relative the alligator snapping turtle Macrochelys temminckii can reach lengths of almost 3 ft). Hence it exhibits the very same features consistently described by eyewitnesses of the Swan Pool mystery beast. Moreover, in sharp contrast to the hellbender, the snapping turtle is commonly kept by professional and amateur herpetological enthusiasts alike, so an escapee (or even a deliberately released) specimen of this species turning up here is by no means implausible. 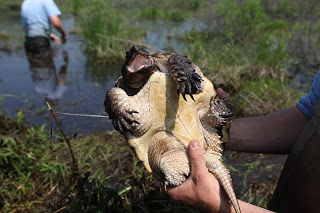 All of which only adds, therefore, to the mystery of why, or how, an unnamed Sandwell Council spokesman could confidently state in subsequent media accounts that this captured snapping turtle was not the elusive Swan Pool cryptid. How did he, or anyone else, know? Snapping turtles are readily able to walk on land, so one could easily have made its way back and forth between Swan Pool and any of the neighbouring marshes

In late July 2001, moreover, a notable sequel occurred - the netting in Swan Pool of an 18-in-long American common snapping turtle, weighing in at a hefty 4 lb. Captured alive but in a distinctly irate state by teenager Harry Billingham, assisted by his stepdad Mark, Harry's brother Jack, and friend Dean Cooke, the aggressive reptile was swiftly brought to the attention of the local RSPCA office by its astonished captors. 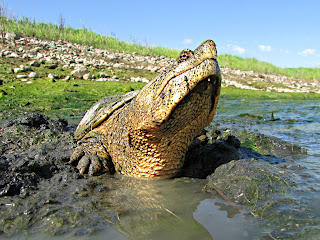 A snapper rises to the occasion (public domain)

As this species is not native to Britain or anywhere else in Europe, the Swan Pool specimen must have been abandoned there by someone, no doubt when it was much smaller - hence quite some time ago, and possibly far back enough for it to have been responsible for the 1999 Sandwell Valleygator flap? Perhaps, when some initial media accounts nicknamed it the Sandwell Snapper, they were closer to the truth than anyone realised.

Further support for this identity as a plausible solution to the Valleygator mystery was obtained on 18 July 2003, when a second sizeable adult American common snapping turtle, sporting a shell diameter of 14 inches and believed to be up to 20 years old, was snared in another West Midlands pool, this time one just north of Slacky Lane in Walsall. As for the Valleygator itself, meanwhile, nothing more has been seen or heard of it, so one or both of the above-mentioned snappers captured respectively near to or at Swan Pool may indeed have been responsible for those pre-Easter sightings of it back in spring 1999. Then again... 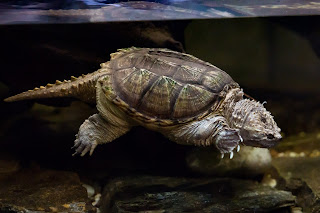