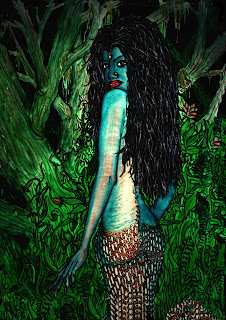 Ancient India – a land of gods, demons, and cobras, and sometimes all three combined within a single dread form: the naga, or human serpent. Some of these ophidian deities were benevolent to humanity, such as the great seven-headed naga Muchilinda, whose magnificent heptarchy of expanded hoods shielded the sleeping Lord Buddha from the blazing mid-day sun. Others, especially the female naga hags or nagini, could be far less benign...

It had started as a playful game of hide and seek between the youth and his lover, taking turns to stay concealed for a while behind a tree or a bush at the edge of the jungle, before suddenly leaping forth to startle the other, then laughing, embracing, and kissing. But now the youth was becoming concerned. He had been searching for his lover, calling out her name, for what seemed like an eternity, finally entering into the jungle itself, as the sun gradually dimmed and diminished, its noontide incandescence replaced by the shimmering haze of early evening.

And then, as if from nowhere, his lover had risen up from the tall grass just ahead, her slim, pale form no longer clothed, and almost sinuous amid the half-light of the jungle’s shade. He called to her, but in answer his lover merely extended her arms to him, as her dark hair cascaded over her shoulders in ripples of obsidian. Her limbs remained hidden amid the grass, but her waist and torso swayed slowly, almost hypnotically, willing him to draw nearer, ever closer, to her waiting arms.

The youth smiled, his earlier fear at her absence now totally dissipated as he moved forward. He had only known her for a short while, yet he had fallen passionately, uncontrollably in love with her almost from the first moment of their meeting. And now, at last, it seemed that his love would be returned.

He stood before her, trembling slightly in anticipation as the cool evening breeze ruffled her dark hair until it seemed almost alive, flickering and entwining. The grass at her waist stirred - and as he looked down, the youth was horrified to see what appeared to be a huge serpent writhing where his lover’s feet must surely be standing.

But even as he opened his mouth to cry out in fear, the cry shrivelled and died in his throat. The breeze had become much stronger, blowing aside the grass, bowing it down in all directions, and the youth’s eyes stared, transfixed, unbelieving, at the huge serpent – which, as he now could see only too plainly, was not a serpent at all, but the limbless, scaly-skinned lower torso of his lover. She was not human – or, at least, not entirely so. She was a naga hag!

Even as he forced himself to look back up at her face, dragging his eyes away from the thrashing, serpentine abomination that was an intrinsic part of her body, he knew that it was too late. He gazed into her cold, amber, reptilian eyes, noticing for the first time that they were lidless, and then, with detached, almost preternatural calmness – or perhaps resigned acquiescence – observed how her slender canine teeth had enlarged into venom-dripping fangs.

He closed his eyes once more, for the last time, and so was spared the ultimate horror of seeing his lover’s face transform into that of a human cobra, its hair flailing outward and coalescing into a dark expanded hood, as it leaned forward to sink its fangs into his throat. Once sustained, the naga hag drew back again, and the youth’s limp brittle shell, which had once known life but only an empty promise of love, dropped soundlessly to the ground, drained and dead, like the last rays of the setting sun that were sinking beneath the sable canopy of the jungle.


This ShukerNature blog article is exclusively excerpted from Creatures of Shadow and Night – a book-in-progress in which I am retelling the folklore and legends of a wide range of sinister and decidedly dark supernatural entities of the night, most of which are relatively or entirely unknown outside their respective homelands. Moreover, each of my verbal portrayals is accompanied visually by a spectacular full-colour illustration specially prepared by highly-acclaimed graphics artist Andy Paciorek.