BRIDE OF THE LINDORM 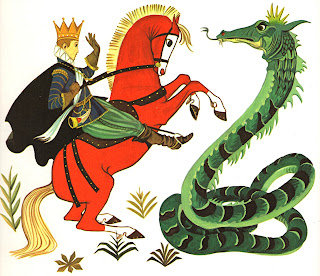 The prince meeting his lindorm brother, from Folk Tales of the World, written by Roger Lancelyn Green, illustrated by Janet and Anne Grahame Johnstone, and published in 1966 by Purnell and Sons Ltd (© Roger Lancelyn Green/ Janet and Anne Grahame Johnstone/Purnell and Sons Ltd – reproduced here on a strictly non-commercial Fair Use basis only)

I owe much of my lifelong love of mythology to the wonderful works of Roger Lancelyn Green that my mother Mary Shuker bought for me when I was a child, in which he retold countless famous and little-known myths, legends, folktales, and fables from all around the world. Moreover, it was within these works that I first encountered many enthralling fabulous beasts and other folkloric entities, including the Japanese tanuki, the Mexican kuil kaax (click here for my ShukerNature coverage of this magical woodland spirit), the Australian kurreah (click here), and – in Green's delightful book Folk Tales of the World, exquisitely illustrated throughout in full colour by Janet and Anne Grahame Johnstone, which I still treasure to this day – the Swedish lindorm. 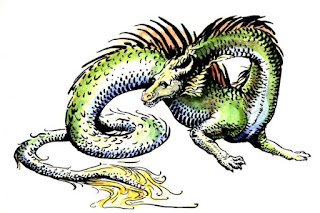 Incidentally, the term 'lindorm' should not be (but often is) confused with 'lindworm' – which technically should only be applied to wingless four-limbed classical dragons. In heraldry, however, it is commonly applied to lindorms.

Lindorms were commonly met with in churchyards, where they ghoulishly devoured human corpses, and would sometimes invade churches too. They occurred in great numbers amid the mountainous peaks of central Europe - indeed, the elaborate dragon-shaped fountain in Klagenfurt, Austria, was inspired by the discovery in 1335 of a supposed lindorm skull (it later proved to be from a woolly rhinoceros!). 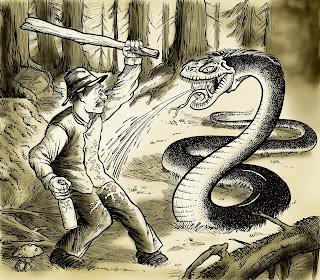 Their favourite land, however, was Sweden, which contained quite a variety of versions, including legless lindorms and even one that sported a small pair of fore-wings instead of a pair of legs. But most Swedish lindorms were of the typical two-limbed variety. There are many traditional tales from this Scandinavian country concerning these particular semi-dragons, but perhaps the most celebrated example is the one that I shall now retell here. 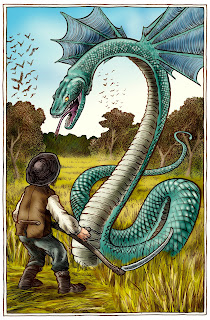 Untold centuries ago, the Swedish monarch's queen lay in her bedchamber, about to give birth to twins - the fulfilment of many years of empty longing for the children that she seemed destined never to conceive. She smiled, as she remembered how, in final desperation, she had consulted a soothsayer who had assured her that in less than a year's time she would be granted two handsome sons - provided that she ate two fresh onions as soon as she returned home to the palace.

The advice seemed quite bizarre, but the queen was so aroused by the chance, however slim, that it offered to her that she made her way back to the palace at once, anxious to seek out the necessary vegetables without delay. Recalling this scene, she also remembered hearing the soothsayer calling after her, but as she had already told her about the onions, the soothsayer's message clearly couldn't have been of much importance, and so the queen hadn't wasted time turning back. Instead, she had continued her journey home, and upon arriving had ordered two crisp, mature onions to be brought to her immediately.

When she received them, the queen was so excited by the promise that these innocuous vegetables held that she ate the first one whole, without even stopping to peel the skins from it. Not surprisingly, however, it tasted quite revolting - and so in spite of her enthusiasm she spent time carefully peeling the second one, stripping away every layer of skin, before finally eating it. Nine months had passed since then, and now, precisely as prophesied by the soothsayer, she was about to bear her greatly-desired children. 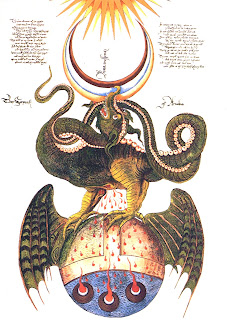 'The Serpent of Arabia' – a lindorm sumptuously depicted in the Ripley Scroll, a 15th-Century alchemical manuscript of emblematic symbolism, and of unknown origin but named after Sir George Ripley, a famous English alchemist (public domain)

The palace courtiers and staff eagerly clamoured outside the royal bedchamber, awaiting the official announcement of the new princes' births. Suddenly, an ear-splitting scream echoed within the chamber - but it was not the lusty cry of a newborn baby. It was, instead, a shriek of horror - an eldritch wail that leapt unbidden from the throat of the royal midwife when she set eyes upon the queen's firstborn. It was male - but it was not human.

The queen had given birth to a lindorm - a hideous snake-like dragon, whose wingless elongate body thrashed upon the marble floor in innumerable scaly coils, and from whose shoulders sprang a pair of powerful limbs with taloned feet. Deathly pale and so repulsed by the creature that she was unable even to whisper, let alone scream, it was the queen, still in labour with her second child, who leaned down, took the young lindorm in her arms - and hurled it, with all the power that her loathing could summon, through a nearby window, from where the creature plummeted into the dense forest surrounding the palace.

Weakened from the exertion, she sank back upon the bed, and gave birth again - but this time to a perfectly healthy, fresh-faced boy, with golden hair and sparkling blue eyes. 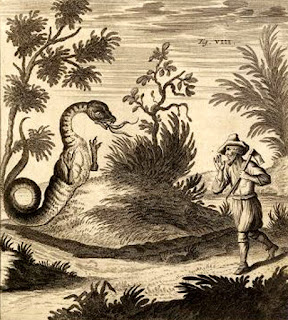 Years passed by, and the boy became a youthful prince in search of a bride - but what he found was his brother, the lindorm. The prince had been riding around the perimeter of the vast forest encompassing the palace when, without warning, a huge ophidian head had emerged from a thorny bush directly ahead. Rearing up until its green-scaled body resembled a towering tree, the lindorm gazed down at the youth with unblinking eyes of amber that effortlessly penetrated his innermost thoughts. And as the prince stared back, mesmerised and motionless before this monstrous entity, he heard its voice, intoning deep within his mind - a voice that assured him with cold, reptilian detachment and certainty that he would never find a wife until he, his elder brother, had obtained the true love of a willing bride.

Accordingly, over the next few months a succession of village maidens were given to the lindorm, in the hope of overcoming this barrier to the young prince's quest for a bride. Needless to say, however, none of the maidens were thrilled at the prospect of marriage to a lindorm, so none came willingly - and, inevitably therefore, none was accepted by the monster. The situation seemed irreconcilable - until one day, that is, when the next maiden selected to be the lindorm's bride had the good fortune to encounter beforehand the soothsayer whom the queen had consulted all those years ago. After listening sympathetically as the maiden spoke of her impending plight, the soothsayer whispered into her ear some words of advice that swiftly replaced her sadness with a smile of joy. 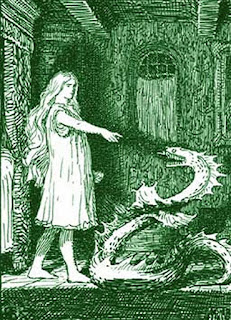 The maiden instructing the lindorm to shed its first skin, as portrayed by Arthur Rackham (public domain)

That night, the maiden was presented to the lindorm, who gruffly told her to take off her dresses - of which she seemed to be wearing a surprising number. She agreed to do this - but only after extracting from the lindorm the promise that for every dress she took off, it would shed a layer of skin. This it did, until only a single layer remained - and until the maiden was clothed in just a single robe. 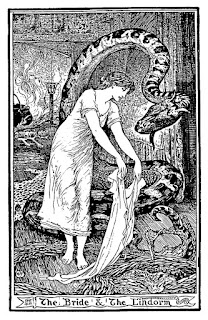 The maiden removing her first dress, watched closely by the lindorm after shedding its first skin as demanded by her - illustrated by Henry Justice Ford (public domain)

Despite remembering the soothsayer's words, it was not without a degree of nervousness that she then removed this final gown and stood still, and naked, before the great dragon.

The lindorm moved towards her, and the maiden tensed - fearing yet desiring what was to come, for if the soothsayer had spoken truthfully to her there would be great happiness, and great love, ahead. And so she stood erect, motionless, as the serpentine monster leisurely, almost tenderly, enveloped her body in its scaly coils. She had expected them to feel cold and slimy, and was therefore pleasantly surprised by their warmth and softness - embracing and caressing her in their muscular folds.

Even so, she felt a flicker of terror rising within her - a desire to close her eyes, to scream, to flee, to do anything rather than remain here. Then the words of the wise old soothsayer came back to her, calming her mind, and she relaxed again.

Gazing about her, she noticed that the lindorm's last layer of skin was so thin as to be almost translucent, and was beginning to peel away, folding back upon itself like a cluster of withered leaves. At the same time, a strange green mist manifested all around, bathing the lindorm in a viridescent haze until she was aware of the creature's continuing presence only from the embrace of its sinuous body.

Gradually, however, the mist dispersed - and revealed that she was no longer wrapped within the serpentine coils of a lindorm after all, but within the firm arms of the most handsome man she had ever seen!

The soothsayer had indeed spoken truthfully - by following her instructions, the enchantment that had incarcerated him within the guise of a lindorm had been dispelled, and here was the elder prince, heir to the country's throne, and for whom the maiden would indeed be a very willing bride. The joyful marriage took place without delay, and after the old queen had given her blessing to the newly-weds, who were now the new king and queen, she felt someone lightly tap her shoulder.

It was the soothsayer, who revealed to her the information that she had not stayed to hear all those years ago - namely, make sure that she peeled both onions before eating them!

This ShukerNature blog article is excerpted from my book Dragons: A Natural History (1995). See also my more recent book, Dragons in Zoology, Cryptozoology, and Culture (2013), for detailed coverage of lindorms in mythology, cryptozoology, and natural history. 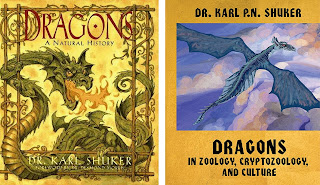