'MYSTERY CREATURES OF CHINA: THE COMPLETE CRYPTOZOOLOGICAL GUIDE', BY DAVID C. XU - A LANDMARK IN THE LITERATURE OF UNKNOWN ANIMALS 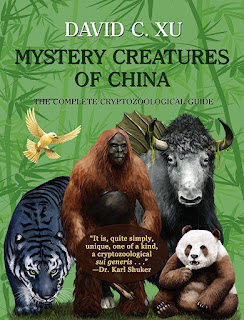 December 2017 may seem rather early for anyone to put forward a major contender to receive in a year's time the accolade of Best Cryptozoology Book of 2018, but in my opinion the truly exceptional work by David C. Xu to which this present ShukerNature blog post is devoted, and which is officially published at the beginning of next month by Coachwhip Publications, more than justifies being nominated for such an honour.

When David very kindly asked me a while ago if I would pen a foreword to his book on Chinese cryptozoology, I was delighted to do so, because Sinian mystery beasts have always fascinated and frustrated me in equal amounts – fascinated by those select examples recorded in Western-language publications, and frustrated by the certain knowledge that there were many additional examples hidden from my investigative capabilities as I do not read or speak any of China's native tongues.  And my latter suspicion was more than confirmed by the incredible diversity of such latter beasts that David's book revealed to me as I read through it in advance of preparing my foreword.

So now, as an exclusive pre-publication taster of what to expect in this incredible, thoroughly engrossing volume, and with David's kind permission, here is my foreword to his book, reproduced in full:

I consider myself very fortunate to possess at least a working knowledge of several different European languages, which has enabled me to research and bring to international cryptozoological attention via my writings a considerable number of fascinating but hitherto-obscure cryptids that had never previously been documented in any English-language publication.

However, there is one massive geographically-based archive of cryptozoological information that until now has remained largely unattainable for me, due simply to the frustrating fact that I have no comparable knowledge or experience of any of the languages indigenous to that vast country in question – the latter country being, of course, China. True, down through the ages, a number of English-language books have chronicled some of the most famous and spectacular of its mythological fauna – such as the Chinese dragons (long, etc), Chinese phoenix (fenghuang), Chinese unicorn (qilin), celestial stag, and winged hua fish. A smaller number of cryptids have also been highlighted internationally, in particular the yeren or Chinese wildman, the blue tigers of Fujian, the aquatic monsters of Lake Tianchi, and the bizarre 'hippoturtleox' of Tibet. Nevertheless, to adapt one of Sir Isaac Newton's most quoted of quotations, to me these are little more than just a few pebbles or seashells lying on the beach, perhaps a little smoother or prettier than some others, but with the great ocean of Sinian cryptozoology lying all undiscovered before me – but not any more!

Thanks to the superb book before you now, the vast and previously-concealed, unseen menagerie of Chinese mystery beasts is enshadowed and encrypted no longer, its fascinating panoply of scientifically unknown animals laid bare at last to an international readership that has waited so long for a knowledgeable guide adept in English to lead it into these secret creatures' enthralling domain.

Having been wholly immersed in cryptozoology from both an investigative and a chronicling standpoint for over 30 years, whenever I read any new such book nowadays I expect to be (and generally am) already familiar with the majority of mystery beasts presented within it – but not this time! To my surprise but total delight, page after page in this extremely comprehensive volume unfurled extraordinary cryptids that I had never previously encountered – confirming my long-held suspicion as outlined earlier here that China's crypto-chronicles held all manner of treasures formerly hidden from me by virtue of my inability to read any Sinian language. And I have no doubt whatsoever that countless other readers similarly limited linguistically will experience the same thrill of discovery as I did when first reading this book, and am still doing when re-reading it.

After all, where else could a non-Chinese cryptozoological reader readily encounter (and especially all within the same single volume) such captivating creatures as cyan lake goats and aquatic oxen, coffin beasts and mountain crashers, elusive water monkeys (one of my favourite 'new' cryptids) and blood-sucking blanket beasts, the tamarisk children and the water man-bear, false-eyed ungulates, and wolf-pack interlopers, a bewilderment of mystery big cats and an extraordinary diversity of man-beasts all meticulously disentangled and delineated, relict chilotheres and living chalicotheres (or at least some mystifying cryptids very like them in appearance), vanishing three-humped camels (another particular favourite of mine) and colour-changing deer, living dragons and latter-day unicorns (not so mythological after all, it would seem), giant birds and birds with four wings, a veritable plethora of putative prehistoric survivors, and even a supposed flying centipede, plus many, many more. Some are undoubtedly more folkloric than factual, but in every instance their case makes compelling reading.

The history of each cryptid is chronicled comprehensively, followed by an equally detailed assessment of the various possible identities on offer for it, and concluding with a very valuable bibliography of sources. There is also a very considerable number of illustrations, including some very eyecatching reconstructions of what many of the cryptids under consideration here may look like, based at least upon eyewitness descriptions.

Today, thanks to the ease with which specialised books on mystery animals that would once have struggled to find a mainstream publisher can now appear in print due to POD technology, e-readers, and other advances, cryptozoology is experiencing a veritable Golden Age within the publishing world, with more titles appearing – and staying – in print than at any other time in this subject's history. In short, crypto-readers nowadays can all too easily find themselves in the previously unexpected but thoroughly delightful position of being spoilt for choice when deciding which book(s) to buy. So here, as a gift from me to you, is a personal recommendation – buy this book, and I absolutely guarantee that you will not be disappointed.

True, I have to confess that when I first read its subtitle I had to suppress an instinctive inward shudder, because I have seen the phrase "Complete…Guide' or similar appear so often in book titles across a vast range of subjects, only for a reading of the books to reveal all too readily how inappropriate and grandiose was the application of such a title to them – but not in this instance. David Xu must be very heartily congratulated, because he has prepared a truly exemplary work of cryptozoological scholarship and erudition, one that in my opinion can stand alongside any of the greatest works on mystery beasts ever published, and, in terms of its specific subject, one that has absolutely no peers or competitors of any kind. It is, quite simply, unique, one of a kind, a cryptozoological sui generis – there really is nothing else like it in existence, and its comprehensiveness is such that I consider it highly unlikely that there ever will be.

So, if you're looking for a fascinating, entirely original cryptozoological book to read (and I am obviously assuming that you have already purchased and read all of mine!), then this is the book for you – it really is as simple as that.

David's book can be ordered here on Amazon's USA site and here on Amazon's UK site – if you do so, I guarantee that it will be one of the most spellbinding cryptozoological books that you will ever read, because it is a monumental landmark in the literature of unknown animals. 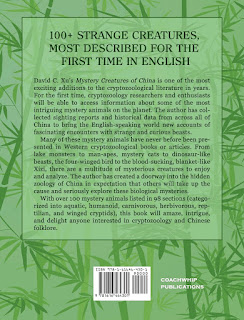