A TENACIOUS PTERODACTYL, OR A CRYPTIC CANARD? RECALLING A CLASSIC CASE OF INFAMOUS IMMOLATION! 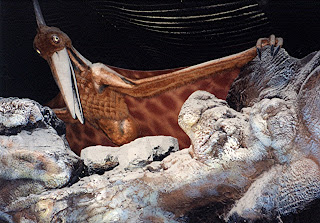 Did a living pterodactyl emerge from a blasted-apart hollow boulder in 19th-Century France? (© Dr Karl Shuker)

It can be all too easy to forget sometimes that just because in over 40 years of researching and writing about all manner of animal anomalies I have encountered one or other tall story countless times, there are many younger enthusiasts out there who are discovering it for the very first time and are naturally very excited by it, not being aware of its full history and denouement.

I was reminded of this recently when I received an email from a youthful cryptozoology fan who had just read what he considered to be an awesome 19th-Century report announcing the discovery of an allegedly long-entombed but still-living pterodactyl in France. I first learned about this (in)famous incident of entombment or immolation more than four decades ago, at the beginning of my own career in cryptozoological research, when Fortean Times recalled it in the form of a delightful comic-strip presentation drawn by FT's inestimable artist-in-residence, the wonderful Hunt Emerson.  So yes, there was a time in my life when I had not previously encountered this case either. Bearing that in mind, therefore, I've decided that it merits a retelling after all, and so, for my youthful correspondent and other first-timers, here it is.

According to an Illustrated London News report for 9 February 1856, a pterodactyl had supposedly emerged, weak but nonetheless alive, from out of a hollow boulder blasted apart during the then-recent excavation of a new railway tunnel at Culmont, in France. As soon as it took its first breath of air, however, it promptly expired. Although it has been repeated ad infinitum ever since in books, articles, and websites, this startling ILN report is rarely if ever reproduced directly in its original typeset form, so I am duly presenting it herewith, complete with its decidedly bizarre, mystifying title. (If anyone can explain to me why in this report's title the pterodactyl was likened to a whale, I'd be extremely grateful. Is it a now-obscure 19th-Century idiom that actually had connotations very different from its primary, literal meaning? I have absolutely no idea.) 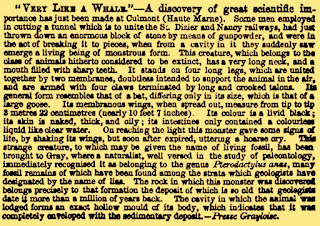 The complete entombed-pterodactyl report as it originally appeared on p. 166 of the Illustrated London News for 9 February 1856 (public domain)

Here, therefore, was surely a true (albeit brief) prehistoric survivor – not merely a modern-day descendant of an ancient line, but a bona fide Mesozoic monster that had somehow survived in suspended animation for over 64 million years! Moreover, when its body was examined by an anonymous expert, he was able to identify its species very precisely – Pterodactylus anas. Yet, amazingly, nothing more was ever heard of this zoologically-priceless specimen – but for good reason.

In reality, of course, there is no such species as Pterodactylus anas, and there was no such specimen either – but none of this should come as any surprise to the linguistically-minded, for whom all of the clues for deciphering the true nature of this tall tale are readily available. After all, 'anas' is Latin for 'duck', which in French (bearing in mind that the pterodactyl was supposedly found in France) is 'canard' – a word with a very different meaning in English. Namely, indicating an unfounded, deceiving story with no truth in it!

If nothing else, therefore, this whimsical case certainly confirms that 'fake news' is not a new phenomenon! 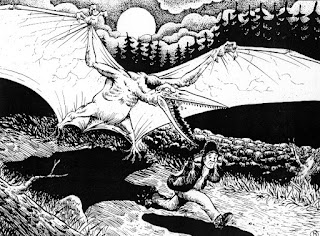 A word of advice: never be tempted to release a pterodactyl from a boulder – you know it makes sense! (© Richard Svensson)