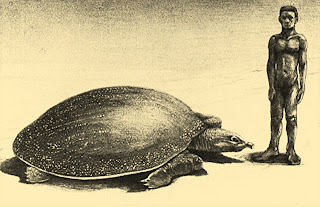 Reconstruction of the possible appearance in life of the Congolese ndendecki, alongside a local pygmy for scale purposes (© David Miller/Prof. Roy P. Mackal)

During the 1980s, Prof. Roy P. Mackal, famous as both a Chicago University biochemist and an enthusiastic spare-time cryptozoologist, led two expeditions to the Republic of the Congo (formerly the French Congo) in search of a mysterious water beast known as the mokele-mbembe, which apparently bears a remarkable resemblance to a small sauropod dinosaur. Sadly, they did not encounter any such creature while there, but they did discover that it was only one of several different types of very large mystery reptile claimed by the local pygmies and Western missionaries to inhabit the vast and virtually inaccessible Likouala swamplands in this country's central region.

Among this assortment of cryptozoological curiosities was the ndendecki, which Mackal's expeditions nicknamed the dinosaur turtle due to its huge size, at least according to reports from eyewitnesses living in the village of Boha and collated by Gilbert Bonguenele Manengue. He was a public security agent commissioned by the military governor general of Brazzaville (this country's capital) to gather together for Mackal's expeditions any available information appertaining to putative unknown animals, and was himself born in Boha. 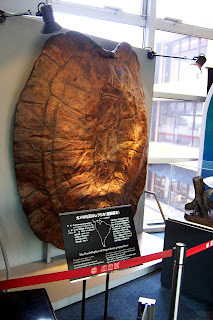 The shell of this gargantuan freshwater chelonian was claimed by the Boha villagers to be conspicuously rounded in shape and to measure some 12-15 ft in diameter, which is very considerably bigger than that of any known species of aquatic chelonian alive today. It even exceeds the largest known fossil freshwater chelonian, the aptly-named Stupendemys, a side-necked turtle from South America's Miocene epoch that may have grown up to 11 ft long, but slightly less in diameter. Happily, however, the ndendecki apparently poses no threat to humans, browsing harmlessly upon detritus at the bottom of rivers and lakes.

As it happens, the Likouala swamps are already known to harbour one fairly large species of freshwater turtle, the African softshell Trionyx triunguis – a well-documented chelonian found in many parts of Africa. However, this species rarely exceeds 3 ft across. Nevertheless, Congolese zoologist Dr Marcellin Agnagna, who has participated in several mokele-mbembe expeditions and has extensive knowledge of the Likouala's fauna, is convinced that this species and the gigantic ndendecki are one and the same, dismissing the appreciable size difference between the two as nothing more than exaggeration upon the part of the eyewitnesses. 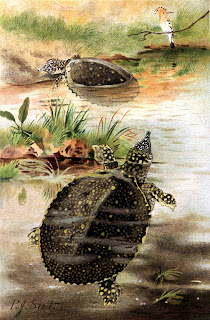 Yet such exaggeration would need to be on a very grand scale indeed to enlarge a 3-ft turtle by approximately four to five times, and it seems unlikely that locals would be prone to such an overestimation of size for a species that is very common here and must therefore be a familiar sight to them. Consequently, it seems more plausible to believe that amid the Likouala's immense and yet scarcely explored wilderness of lakes, rivers, and swamps are some extra-large individuals of T. triunguis that have lived to great ages and continued growing throughout their protracted lives. Perhaps 13-16.5 ft is indeed an exaggeration, but even a softshell only half as big would still be an extremely imposing creature to encounter, and could certainly explain the ndendecki.

More information concerning the ndendecki can be found in Roy Mackal's book A Living Dinosaur? (1987). 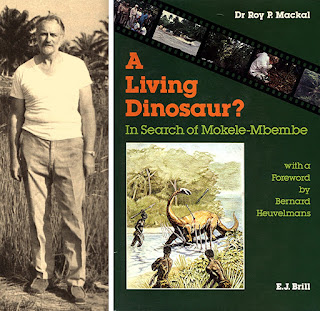