THE GIANT STONE TORTOISES OF KARAKORUM – A MONUMENTAL MYSTERY FROM MONGOLIA 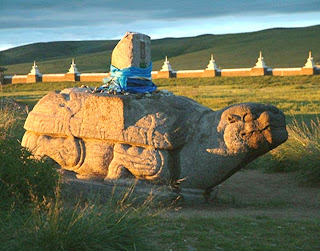 In the Russian republic of Buryatia (in southcentral Siberia), the Russian Far East, the Korean Peninsula, and, particularly, Mongolia (which, incidentally, contains no known present-day chelonians of any kind), a number of very large stone statues of tortoises can be found – but these are no ordinary tortoises, as documented by chelonian expert and palaeobiologist Prof. Viacheslav Mikhailovich Chkhikvadze, from the Georgian Academy of Sciences in Tbilisi.

In a Priroda article from 1988, Prof. Chkhikvadze focused much of his attention upon three such statues in Mongolia, still standing amid the palace ruins at Karakorum, which was once the Mongol Empire's capital city. The biggest of these statues dates back to the 13th Century, and measures 92 ft long, 34.5 ft wide, and 41 ft high. The Mongolian name for it sounds like 'jastmel'chij'. 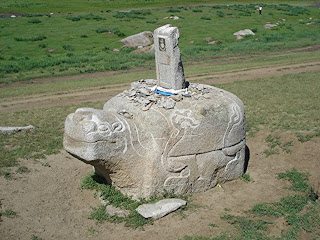 They all portray a type of huge long-shelled tortoise with a giant head on a thick neck, protruding eyes, and – incongruously for a tortoise - a pair of short, closely-pressed ears. Equally odd are the sharp teeth that project from the upper jaw (chelonians are normally toothless), and all four feet have five long claws. One of the statues incorporates an inset seat for visitors to sit upon.

A particularly old example of these statues, dating from the 8th Century, was found in Mongolia's northern province, and has subsequently become the subject of much study at the archaeological department of the Academic History Institute in Ulan Bator. Moreover, there were further examples at each gate on the four sides of the city wall at Karakorum. Steles (pillars) were present on the backs of these tortoises, which were crowned with beacons for travellers in the steppe. 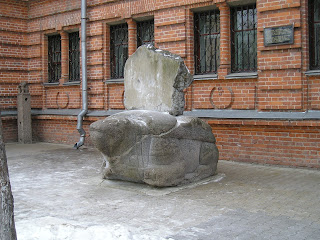 Perhaps the most famous of the giant stone tortoise monuments outside Mongolia is the example discovered by early Russian settlers in 1868, on the grave mound of the Jurchen general Asikui, where it had been installed in c.1193. Originally sited near the village of Nikolskoye (today the city of Ussuriysk) in what is now the Russian Far East, in 1895 it was transported to the I.N. Grodekov Khabarovsk Territorial Museum of Regional Studies. It dates from the Jin Dynasty (1115-1234).

What made them so intriguing to Prof. Chkhikvadze is that in his view, their basic tortoise form that is revealed once its stylised non-chelonian features – ears, teeth – are stripped away bears a remarkable similarity to the American snapping turtle Chelydra serpentina. In prehistoric times, its taxonomic family, Chelydridae, was distributed widely in Europe, Asia, and the New World, but today it is confined exclusively to the Americas (except of course for snapping turtle escapees/releases from captivity, several of which have been found living in British and other European ponds and lakes during recent years – click here to read about some sizeable, highly-publicised examples that were found some years ago very near to my home in the West Midlands, England).

Consequently, as noted by Chkhikvadze, it remains a riddle how Central Asiatic sculptors in the Middle Ages knew a type of tortoise that in the Old World had been considered extinct for the past two million years. There is a remote possibility that these sculptors had seen fossilised remains of prehistoric Asian chelydrids. Unusual or eyecatching fossils have inspired a number of medieval representations in a wide range of localities globally, so such a situation would hardly be unique. Also remote, but again not impossible, is that a species of large Asian chelydrid survived into much more recent times than is currently known from the fossil record, and either directly or via generations of verbally-transmitted descriptions inspired the sculptors responsible for the statues.

Incidentally, such explanations as these may also account for another anomalous portrayal, but this time at Marcahausi, which is a plateau 13,000 ft above sea level, and situated some 50 miles northeast of Lima, in Peru. It was here that in 1952 Dr Daniel Ruzo discovered a series of fascinating megalithic sculptures. Not only did they include some enormous human figures carved from the rocks but also a wide range of animals, including lions, camels, elephants – and one that in Ruzo's opinion seemed to represent an amphichelydian – i.e. belonging to a taxonomic group of prehistoric chelonians characterised by their non-retractable neck. 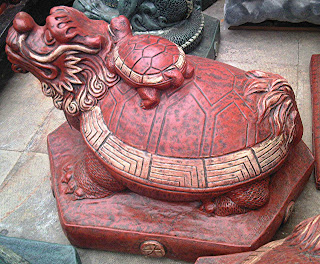 Interestingly, the carving of giant stone tortoises in the Far East underwent an evolution of its own down through the ages, witnessing as already noted the popular addition of a stele to the tortoise's back, so that it became a symbol of heavy loads and burden. And in more modern times, especially in China where dragons have always played such a significant and diverse role in this country's mythology, the giant tortoise has itself acquired the head of a dragon - yielding a ferocious-looking hybrid monster known as a bixi. (NB – this name is also applied more generally to all giant tortoise sculptures by some researchers, including those from Mongolia documented by me here.)

This ShukerNature blog article is excerpted from my book Mirabilis: A Carnival of Cryptozoology and Unnatural History. 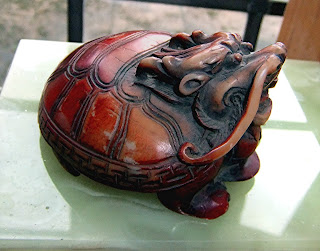