MYSTERY OF THE MACAW MOSAIC - A (NOT SO) ROMAN RIDDLE? 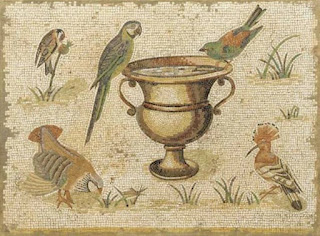 I'm very grateful to Brazil-based Facebook friend and parrot aficionado Rafael Nascimento for having kindly brought to my attention the most intriguing marble mosaic panel depicted at the beginning of this present ShukerNature blog article.

As seen, this mosaic panel is decorated with five bird depictions, shown variously surrounding and perched upon a water vessel, and according to its description in a catalogue produced by the famous auction house Christie's it is of Roman origin and dates from approximately the 2nd Century AD. This attractive artifact was sold on 11 December 2003 by Christie's for the very princely sum of US$ 107,550. Its previous owner was an unnamed private collector who had owned it since c.1980.

What is so intriguing about this 2nd-Century AD mosaic from a zoological standpoint, however, but which to my knowledge has never previously been pointed out in the cryptozoological literature, is that it depicts a blue-and-yellow macaw Ara ararauna (aka blue-and-gold macaw). This is a readily-recognisable parrot species native to South America – i.e. a continent whose own existence (let alone that of its indigenous fauna) was not discovered by the West for another 1300 years! So how can this anachronistic ornithological anomaly be explained?

It is remotely conceivable that the mosaic has been partially reconstituted in modern times but with a South American macaw erroneously added rather than an African parrot when filling the gaps. Yet judging from the photograph of it reproduced here, it doesn't look as if this mosaic has been reconstituted in any way, and even if it had been, this would surely have been alluded to in its description by Christie's.

Nevertheless, if we assume that this mosaic has not been reconstituted, and also that it neither is a fake nor has been misidentified but is indeed genuine, then we must also assume that the macaw's depiction upon it indicates that Romans were trading with South America many centuries before this continent was supposedly revealed to Europe. And if so, this mosaic constitutes an immensely significant historical artifact.

Worth noting, incidentally, is that whoever wrote its description for Christie's catalogue was clearly not well-versed in ornithology. For what they referred to as a pileated woodpecker is actually a hoopoe (bottom right in the mosaic), what they called a greenfinch is a European roller (top right, perched upon the water vessel), and what they termed a chaffinch is a goldfinch (top left). Indeed, the only correctly-identified bird on the mosaic was the partridge (bottom left). Let us hope, therefore, that their dating and authenticity abilities in relation to this particular object were more accurate – but were they? 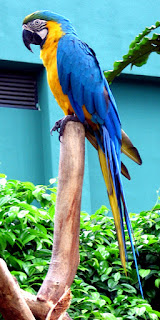 For if this macaw-depicting mosaic truly provided firm evidence of Roman trading with South America, why had it not attracted considerable attention from historians and archaeologists? A detailed online search by me concerning it had proved singularly unable to uncover any evidence of such attention. Not surprisingly, I was very mystified, but I subsequently obtained some information that may conceivably explain these anomalies.

My discovery began via fellow cryptozoological investigator Andy McGrath, who kindly informed me that after reading some posts concerning it on Facebook and a short report by me in my regular Alien Zoo column in Fortean Times, he had discovered that due to how attractive this mosaic panel was, it had actually been pictured on the front cover of the Christie's catalogue containing it. This fact proved invaluable to me in uncovering some very thought-provoking additional information.

In early 2021, the eagerly-awaited English-language edition of a fascinating book written by Dutch art crime detective/investigator Arthur Brand and entitled Hitler's Horses was published (after originally appearing in Dutch as De paarden van Hitler in 2019). It documented the incredible real-life story of how 'Striding Horses' by Nazi sculptor Josef Thorak, a spectacular statue featuring two gigantic bronze horses, which had been a favourite of Adolf Hitler but had later vanished, long assumed destroyed during the bombing of Berlin in World War II, was sensationally rediscovered via some complex, dangerous sleuthing by Brand.

Mentioned almost in passing within Brand's book, moreover, were some most intriguing details relevant to the macaw mosaic. Brand recalled a conversation that he'd had with an enigmatic figure from the art world named Michel van Rijn, during which van Rijn had shown him an auction catalogue whose cover had depicted a Roman mosaic panel depicting five birds around a drinking vessel, one of these birds being a South American blue and yellow macaw! (Although not named, judging from Brand's description of the mosaic panel this catalogue must surely have been Christie's?) Bursting out laughing, Brand had asked where this forgery (his word) had originated. Here is van Rijn's reply:

Tunisia, I think. There's a village just south of Sousse where they churn out fake Greek and Roman mosaics. A regular goldmine.

I wish to make absolutely clear here that I am entirely unaware of any formal, professional confirmation that this particular artefact is indeed a fake, a forgery. Yet if what van Rijn had said about it and the veritable mosaic fake factory operating near Sousse does have merit, might this be why the macaw mosaic panel has signally failed to influence the accepted mainstream views concerning early Roman trading? 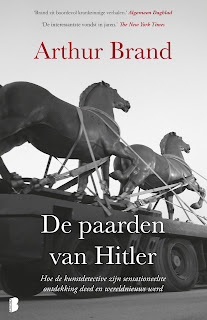 The original 2019 Dutch edition of Hitler's Horses, by Arthur Brand (© Arthur Brand/Boekerij – reproduced here on a strictly non-commercial Fair Use basis for educational/review purposes only)
Posted by Dr Karl Shuker at 21:37