'THE BOY WHO SAW BIGFOOT' - BOOKING MY REDISCOVERY AT LONG LAST OF A CRYPTOZOOLOGY NOVEL LONG LOST! 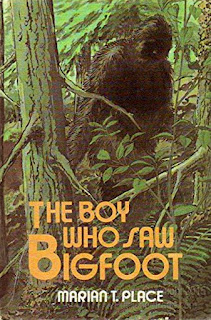 The very evocative front cover of my Weekly Readers Books hardback edition of The Boy Who Saw Bigfoot, a novel written by Marian T. Place and first published in 1979 by Dodd, Mead & Company (© Marian T. Place/Dodd, Mead & Company/Weekly Readers Books – reproduced here on a strictly non-commercial Fair Use basis for educational/review purposes only)

Friends and colleagues, including loyal ShukerNature readers, will be very familiar with my succession of searches in recent times for various unusual books, magazines, records, and artefacts that I once fleetingly encountered many years previously but inexplicably failed to purchase and which have eluded all of my attempts since then to identify and very belatedly buy them. Happily, however, quite a few of these recent searches by me have finally ended in success, and the cryptozoologically-relevant example documented here is one of them.

It was during the evening of 7 April 2021 when I scored this particular "identified at last after all these years" successes. On that occasion, my search had been the latest one in a lengthy succession spanning a quartet of decades, seeking a very specific bigfoot-themed novel that for so long had seemed no less elusive than its cryptid subject! Here is the back-story to my quest for it.

One Bank Holiday Tuesday during the early 1980s, my family and I visited the Welsh seaside city of Newport for the day, where, while walking around the shops in its central area (by my early 20s, I'd long since lost interest in sitting on a beach!), Mom and I came across a big second-hand bookshop. Needless to say, I swiftly entered it and began a perusal of its wares, especially as this shop was totally new to me.

While doing so, I chanced upon a slender hardback book with a very attractive drawn illustration that wrapped around its entire front cover, spine, and back cover, and which was mainly brown with some green, featuring a bigfoot on the front. I opened it, but when I discovered that it was a children's novel rather than a work of non-fiction, I placed it back on the shelf, and eventually left the bookshop without buying anything – a rare event indeed for me! 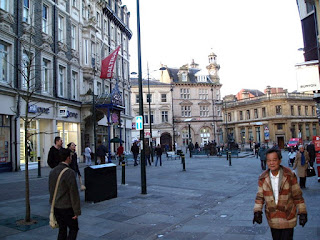 Once back home, however, as so often happens with me, I began to wish that I'd bought the book after all, even if only as a novelty or souvenir, as it wasn't expensive and I'd never seen it before. Unfortunately, Newport was a very considerable distance away from where we lived, so there was no question of travelling all the way back there to buy it. I've only visited Newport once since then, several years later, and although the shop was still there, the bigfoot book had gone.

Regrettably, I hadn't taken notice of either its title or its author while looking at this book's cover, my attention having been focused upon its very striking wraparound illustration instead. Nevertheless, the memory of it has occasionally popped into my head during the subsequent four decades, as it did again on 7 April. However, after having failed on several previous occasions, this time I was determined to track down this long-vanished volume and identify it. And after scouring through untold lists of bigfoot-entitled books that night on ebay, Abebooks, Amazon, etc, I did indeed finally find it!

I did so by entering "bigfoot children's novel 1970s" in Google's Image Search (because I'd seen the book during the early 1980s, I guessed that it had probably been published in the 1970s – any earlier would have been most unlikely because bigfoot wasn't a well-known cryptid prior to the 1968 Patterson-Gimlin film). Sure enough, up popped a picture of the entire cover of a book, front and back, featuring a wraparound illustration that immediately clicked in my memory – that was it, that was the very same cover whose striking image had stayed with me all these years!

The book turned out to be The Boy Who Saw Bigfoot, a 96-page hardback novel aimed at young people, written by American children's authoress and bigfoot seeker Marian T. Place, who has also written various other bigfoot-themed novels for youngsters (as well as one non-fiction book), which was first published in 1979 by New York-based publisher Dodd, Mead & Company. I soon found for sale online a reasonably-priced good-condition copy of the Weekly Readers Books hardback edition featuring that same iconic cover illustration and published that same year, which I purchased straight away. It arrived safely from the States about a fortnight later. So after more than 40 years, I finally own this hitherto nebulous novel, and I now look forward to reading it at last. Finally: here is that very memorable wraparound cover that finally solved for me the longstanding mystery of the missing bigfoot book: 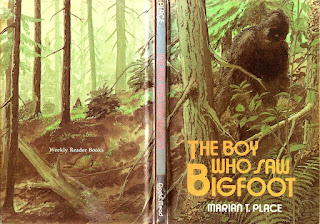