DENYING A DEINOTHERE - WHEN THE CAMERA DOES LIE! 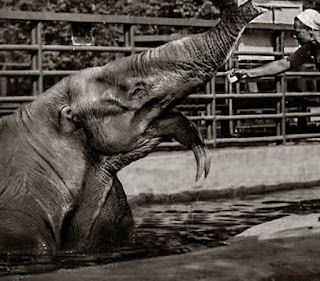 Thanks to the sophistication of readily-available digital photo-manipulation programs, photographic evidence for the existence of cryptids is of very little worth nowadays, at least in my opinion. This was readily demonstrated in mid-February 2021, following the widespread circulation online of a close-up, excellent-quality b/w photograph seemingly depicting the presence in some unidentified zoological gardens of a living deinothere.

Renowned for their huge body size and especially for their diagnostic downward-curving lower jaw and lower tusks but absence of upper tusks, deinotheres were prehistoric pachyderms distantly related to today's elephants. However, even the most recent fossils of these mega-mammals date back 1 million years.

Clearly, therefore, the existence of a specimen alive and well in any zoo would, if genuine, be a scientific sensation. Yet as the scientific world has made no mention whatsoever of any such prehistoric survivor thriving in captivity, the photo is evidently a fake. 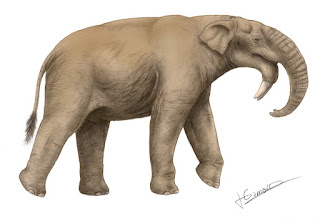 Reconstruction of the likely appearance of a deinothere in life (© Concavenator/Wikipedia – CC BY-SA 4.0 licence)

Over the years, I have made a point of exposing many fake photos of the cryptozoological kind, as revealed in many ShukerNature blog articles, in the hope of ensuring that, by doing so, these hoax images can no longer mislead anyone. The most effective means of accomplishing this feat is to uncover the original, genuine photo that the hoaxer has photo-manipulated to yield the fake version, which I have successfully achieved on numerous occasions by conducting detailed image searches online. So when the deinothere picture was brought to my attention, I duly began one such search, but on this particular occasion a fellow cryptozoological researcher beat me to it.

German cryptozoologist and longstanding friend Markus Hemmler had seen the deinothere photo before I had done and had begun an online image search of his own for the original genuine picture straight away. Moreover, he soon met with success, discovering that the original image was a vintage photograph that actually depicted a hippopotamus living in what was then Leningrad Zoo in the USSR.

As he informed me on 14 February, Markus had found it in a Czech article from 4 March 2017, documenting the hardships that the zoo and its animals had suffered during World War 2 (click here to access this article). A reconstruction of what a deinothere may have looked like in life had been deftly superimposed over the hippo by some unknown hoaxer, hiding it completely. Case closed. 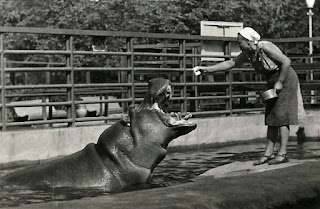 The vintage photograph of a hippopotamus living at Leningrad Zoo during WW2 that had been digitally manipulated by person(s) unknown to create the fake deinothere photograph (public domain)
Posted by Dr Karl Shuker at 11:14