HOW TO LOSE A CHIMAERA, IN ONE EASY LESSON! 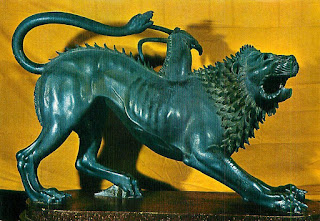 Vintage picture postcard depicting the famous Chimaera of Arezzo bronze statue; it was originally part of a group, with Bellerophon and Pegasus fighting it (public domain)

How to lose a chimaera in one easy lesson? Simply see it, then promptly forget all about it, until far too much time has passed to make amends. See, I told you that it was easy! Confused? I was too, for a while – but let's begin at the beginning.

The year was 1980-ish, sometime in that decade anyway. It was during an afternoon in the Midlands town of Stratford-upon-Avon, famous not only in England but also internationally as the birthplace of a certain playwright, one William Shakespeare, to be precise. I was there with my family, as this was a favourite visiting locale for us on Sundays, because unlike in many other English towns back then, most shops in Stratford were open on the Sabbath due its huge popularity with overseas tourists. 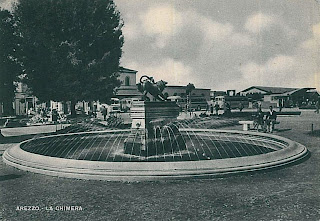 And so it was on that fateful afternoon that I found myself in a large two-storey shopping complex in the centre of Stratford's shopping area, a complex that specialized in antiques. Its very spacious interior was divided up into numerous stalls, each stall rented out to a different antiques seller, so it collectively offered a vast range of objets d'art, curiosities, and exotica of every conceivable kind – in other words, a fascinating place in which to spend time browsing, at least for anyone like me with a decidedly eclectic range of interests.

In one corner of the downstairs storey was a stall whose lady vendor could usually be found whiling away the hours by knitting as potential purchasers eyed her wares. I can still vividly recall spotting on the floor amidst some other figurines a Jack Russell terrier-sized black sculpture in metal of what seemed to me to be a somewhat odd-looking lion, with a spiky mane, unusually slender haunches, and a long tail that curved up over its back instead of downwards. There also seemed to be something peculiar sticking up from its shoulders, but as I wasn't overly interested in this ostensibly misshaped, confusing creature, I never bothered to peer closer to see what that 'something peculiar' was. Instead, my gaze fell elsewhere, peering at other items in her stall before moving on to various stalls nearby – this complex contained a great many stalls, so in order to visit all or most of them, it paid not to linger or loiter too long at any single one. 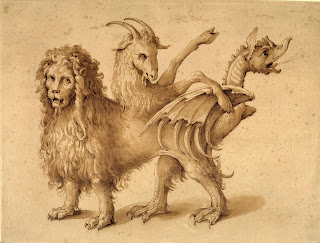 An inordinately elaborate chimaera, by Jacopo Ligozzi, created between 1590 and 1610 AD (public domain)

I thought nothing more of that strange-looking leonine statue for a long time, some years in fact, until one day I was idly flicking through a Larousse-published encyclopaedia of art that I'd lately purchased, and there, to my great surprise, was a photograph of a statue that looked exactly like the odd, spiky-maned lion that I'd seen during that long-gone Sunday afternoon visit to Stratford – except that it wasn't a lion after all. Instead, it was a chimaera (=chimera), and no ordinary chimaera either, always assuming of course that any chimaera can ever be considered ordinary. But what exactly IS a chimaera?

If you're unversed in Greek mythology, you may not have encountered the stirring legend of Bellerophon, Pegasus, and the Chimaera, so here are its edited highlights. The hideous semi-human monster Echidna had given birth to a number of horrific beasts, including the three-headed hell hound Cerberus, the two-headed monster hound Orthos, the many-headed Lernaean hydra, and the chimaera, which was yet another multi-headed horror. 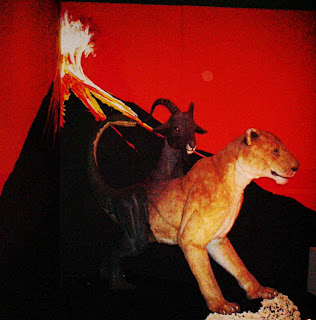 An animatronic large-scale model of the chimaera (© Dr Karl Shuker)

This terrifying beast took the form of a huge lion, but unlike any normal member of the leonine pride, the chimaera bore a second head, in the form of a horned goat's, sprouting forth from between its shoulders or its upper back (recollections may vary, as I believe someone once said recently…?), and a third head, in the form of a venomous snake's, at the end of its long, ever-thrashing tail. Moreover, as if all of that were not already more than sufficiently deadly for anyone to deal with, the chimaera also breathed fire, jetting forth great flames of destruction from the jaws of its primary, leonine head.

In other words, this was an exceptionslly formidable beast for anyone to contend with, but most especially for the poor benighted inhabitants of  Caria in northern Anatolia, Turkey – because this is where the chimaera had taken up residence and was terrorizing the helpless populace, who had no answer to the perilous threat posed by an enormous monstrosity with three different heads and infernal flame-throwing capabilities. 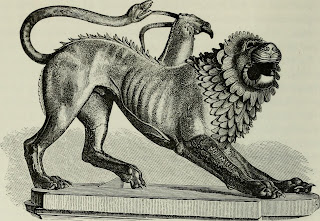 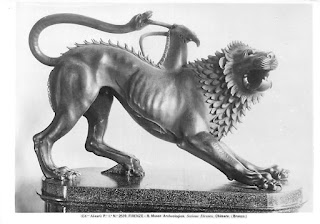 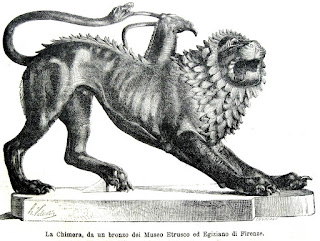 Two vintage engravings of the Chimaera of Arezzo bronze statue (top and bottom); and a vintage b/w photograph of it (middle) – note the dedicatory inscription to the god Tinia carved upon its right foreleg (all public domain)

In such a dire situation, the usual plan of action is for the terrified locals to send out for a hero to dispatch their hideous persecutor, but in this instance they did not have to do so, because just such a man had already been sent there, by his scheming uncle, King Iobates of Lycia in Anatolia, who fervently hoped that his heroic nephew would be killed by the chimaera, thereby foiling a prophecy claiming that his nephew would kill him instead.

The nephew in question was a mighty, fearless warrior-hero named Bellerophon, who arrived in Caria astride his equally mighty, fearless steed. Nor was this just any mighty, fearless steed either – in fact, it was none other than the magnificent winged horse Pegasus, previously untamed, but whom Bellerophon had successfully captured using the goddess Athena's enchanted golden bridle while it was drinking from a sacred spring on the citadel of Corinth in Greece, unaware of Bellerophon's stealthy approach. 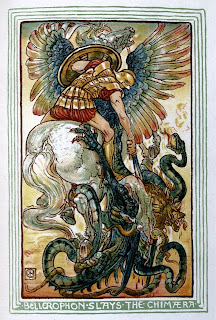 Riding Pegasus, Bellerophon swiftly entered into battle with the chimaera, but even though his winged steed possessed the significant advantage of flight, it was a long and physically grueling onslaught before Bellerophon and Pegasus finally wore down this immensely powerful monster's vast reserves of strength. Doing so, however, finally enabled Bellerophon to slay it, by firing a spear tipped with a block of lead down its throat, whose fire melted the lead, thereby suffocating the chimaera, and freeing the people of Caria from its tyranny forever.

Encouraged by his great success, Bellerophon then decided to attempt an even more daring feat – to fly up through the sky upon Pegasus until he reached the very home of the gods themselves, who had hitherto remained forever concealed from human eyes in their lofty cloud-shielded domain at the very summit of Mount Olympus. This was something that no mortal had ever even attempted before, let alone achieved, but Bellerophon was intent upon doing so, and promptly set off, riding Pegasus ever upwards towards the divine dwelling place of the Greek deities. 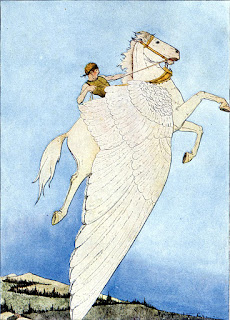 An exquisite illustration from 1914 of Bellerophon riding Pegasus (public domain)

Zeus, however, was far from pleased about this. He had watched with pleasure as Bellerophon had dispatched the dreaded chimaera, but now his brow was creased with fury, his eyes thunderous with rage, as he witnessed Bellerophon's blasphemous ascent through the skies towards their rarefied Olympian home. Suddenly, Zeus had an idea – he sent forth a biting gadfly, down towards Bellerophon and his winged steed. When it reached them, the gadfly savagely bit Pegasus on his rump – which caused him to rear up in shock and pain, throwing an unsuspecting Bellerophon off his back, who plummeted headlong back down to Earth.

Miraculously, however, Bellerophon survived, by landing on a thorn bush that cushioned his fall, but its thorns blinded him, and he spent the rest of his days wandering the land piteously like a beggar, in abject misery – a sorry end indeed for a former hero and slayer of monsters. 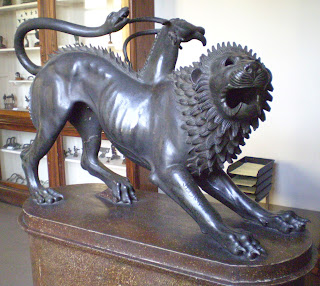 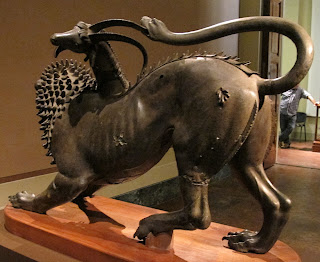 Back now to my afore-mentioned Larousse-published encyclopaedia of art, and the photograph that I had seen in it was of a bronze statue of the chimaera, which had been unearthed by construction workers on 15 November 1553 at Arezzo, an ancient Etruscan and Roman city in Tuscany, Italy, and which dated back to approximately 400 BC.

Nowadays known officially as the Chimaera of Arezzo, and widely deemed to be the finest example ever uncovered of ancient Etruscan artwork, this spectacular statue is believed to have been a votive offering to the sky god Tinia – the supreme deity in Etruscan mythology. It stands 78.5 cm (2.5 ft) high, measures 129 cm (4.25 ft) in total length, and after passing through several different owners and holding locations it has been on permanent display at Florence's National Archaeological Museum in Tuscany since 1870. 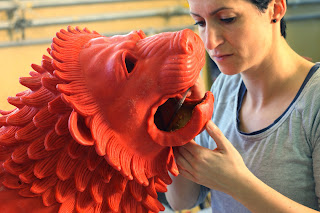 Apart from its bright red colour, this is an identical replica of the Chimaera of Arezzo bronze statue, and was cast by the Ferdinando Marinelli Artistic Foundry (© Piero Paoletti/Wikipedia – CC BY-SA 4.0 licence) 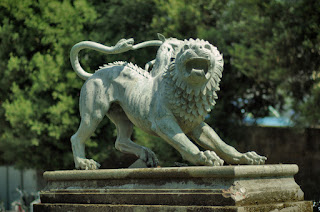 I now realized that what I had seen in that antiques stall at Stratford was a modern-day replica of this historically highly significant statue, a faithful facsimile of the Chimaera of Arezzo no less. Unfortunately, however, I hadn't realized back then what it was, so I hadn't thought to ask its price. True, the price may have been more than I could have afforded, but I’ll never know, because I never asked.

All that I do know is that in the 30-40 years that have passed since that monumental miss on my part, I have never once seen another contemporary reproduction of the Chimaera of Arezzo statue for sale, anywhere. But I live in hope… 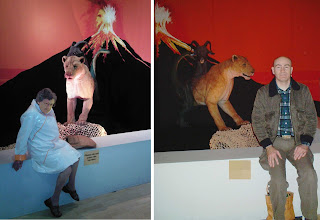 Finally: The 2012 fantasy movie Wrath of the Titans, albeit playing fast and loose with classical Greek mythology as is Hollywod's wont,  contains an undeniably thrilling battle sequence between Perseus (as opposed to Bellerophon) and a winged chimaera - check out its sneaky serpentine tail in the following video clip: