MYSTERY BEASTS SERVED UP ON A PLATE, GREEK STYLE! 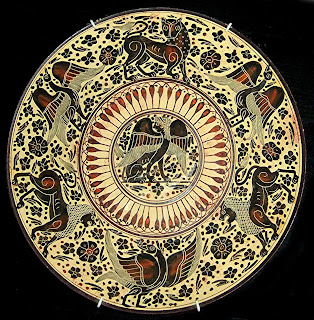 On Tuesdays and Fridays, the (very) small outdoor market in my West Midlands, England, home town is largely devoted to bric-a-brac and collector's stalls, selling all manner of curiosities and exotica amidst the more traditional DVDs, stamps, books, medals, toys, records, ornaments, and suchlike – so naturally I'm a frequent visitor!

Yesterday, the very first stall that I walked up to included among its varied array of objects for sale the large and very ornately decorated terracotta Greek wall plate whose photograph opens this present ShukerNature article. Although only a modern-day creation, unsigned and unstamped, its sizeable 11-inch diameter coupled with its striking portrayal of several different animals in classical Greek style rendered this exquisite wall plate an extremely eyecatching item of artwork very worthy of being displayed, and its previous owner had evidently thought so too, because a wall-hanger frame was still attached to its reverse side.

What attracted me to this plate most of all, however, was the precise nature of the animals depicted upon it, because whereas some were readily identifiable, others were much more mysterious. Consequently, I decided to ask its price, although I strongly suspected that such a beautiful object, especially one that was in excellent condition too, would not be cheap.  When I asked the seller, a look of intense concentration immediately fixed itself upon his face, and he proceeded to stand there for several moments, in deep, rapt contemplation. How much would he decide to ask for it, I wondered - £5, £10, possibly even more? After what seemed like an eternity, the seller finally reached a decision and turned slowly towards me, as I awaited with quiet dread the size of the figure that he was about to quote me.

Never had a 20p coin ever exited anyone's pocket and found itself in someone else's hand as rapidly as did the 20p coin that I used to purchase this absolute bargain!

Picking up the surprisingly heavy but thoroughly wonderful wall plate that was now mine, all mine, I placed it gingerly inside a plastic carrier bag and then that inside another one, to ensure that nothing else that I may purchase there would knock against it and possibly chip its beautiful surface, and then I walked happily away, another item of potential cryptozoological interest to add to my collection.

When I arrived back home, I unwrapped the plate and spent some time perusing its portrayed beasts. First and foremost to attract my attention was the gorgeously-detailed fabulous beast depicted at its centre, which I readily recognized to be a Greek sphinx, combining a lion's body with a woman's head, and winged. Egyptian sphinxes, conversely, combine a lion's body with a man's head, and are not winged. 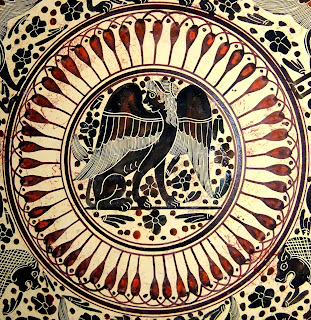 Turning now to the various beasts decorating the plate's perimeter, I could see straight away that two of them were a pair of maned lions, depicted near to bottom-left and bottom-right of the plate: 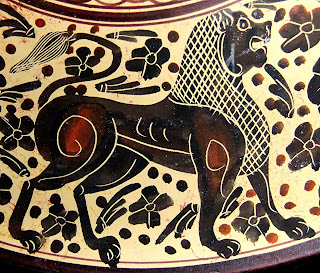 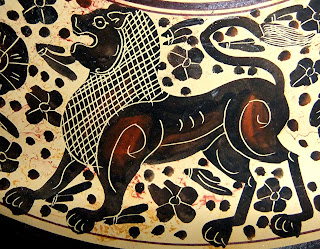 This left four other creatures still to identify, and this is where it became rather more difficult, at least initially. Three of these – positioned bottom-centre, near top-left and near top-right – were depictions of a very distinctive, unusual type of bird. It sported a long swan-like or goose-like neck, but its plumage's form and colouration did not match that of any swan or goose native to either Greece or its environs that I could think of. And yet it did seem strangely familiar somehow. 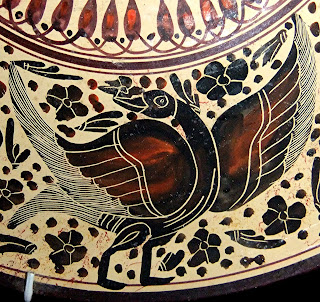 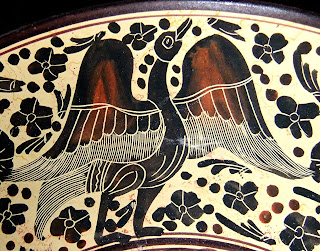 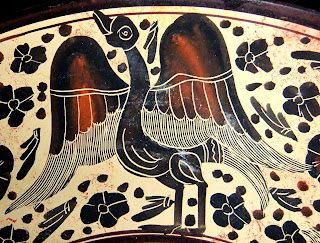 After giving the matter some thought, I then gave thanks to the fact that I was not only a lover of classical mythology but also a stamp collector, because an image had suddenly popped into my mind – the image of one specific postage stamp featuring the classical Greek demi-god hero Heracles (aka Hercules) battling a flock of avian man-eaters known as the Stymphalian birds (click here to access my detailed investigation of these creatures elsewhere on ShukerNature).

In 1982, Monaco had commemorated the famous Greek legend of Heracles by issuing a series of postage stamps that each illustrated one of his twelve great labours. And among those labours was his slaying of the ferocious lake-dwelling Stymphalian birds, which reputedly possessed long necks and huge wings of brass. Moreover, the three birds depicted on that particular stamp definitely bore a marked resemblance to the tantalizing trio portrayed upon my Greek wall plate. 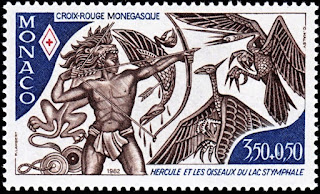 Consequently, although I cannot be absolutely certain, it seems reasonable to assume that my plate's mystery birds are indeed representations of these mythological feathered monsters. Indeed; the plate's modern-day Greek artist may even have been directly inspired by that particular Greek-themed Monaco stamp when designing his birds for it.

All that now awaited my attention and attempts to identify it was the very intriguing animal portrayed at top-centre on my plate. Looking closely at it, I felt that it most closely resembled some form of big cat. Unquestionably, its face, body shape, and paws were all decidedly feline, but if so, which cat could it be?

For whereas the creature's chest was very noticeably spotted, like that of a leopard, its tail was just as noticeably tufted, like that of a lion. Yet it did not possess a mane like the instantly recognisable pair of lions portrayed elsewhere on the plate both sported. Perhaps it was meant to be a lioness rather than a lion, but if so, why was its chest spotted? Equally, why only its chest, why not the remainder of its body as well, which is what you would expect if, tufted tail notwithstanding, it was intended to be a representation of a leopard? All very mystifying.

And a day later it remains very mystifying, because despite having given the matter much thought during the interim period between then and now, I am still unable to offer a plausible identity for this semi-mottled mystery beast. Perhaps it was simply an invention of the artist, a fictitious entity playfully added to the plate's panoply of authentic classical Greek fauna from reality and mythology (back in early times, lions did exist here). Alternatively, might it even be an attempt by him to portray a leopon, a hybrid of lion and leopard? Or could it be some fabled Greek beast unfamiliar to me? I shall continue to investigate this pictured puzzle, but if any ShukerNature reader can offer me any suggestions of their own, I'd greatly welcome receiving them. 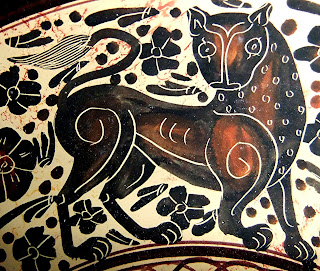 The unidentified mystery beast depicted on my Greek wall plate, ostensibly combining morphological features of the lion and the leopard (© Dr Karl Shuker)

Finally: this particular example is one of several modern-day Greek wall plates decorated with exquisite depictions of mythological beasts and deities that I have purchased down through the years at various bric-a-brac markets and car boot sales.

I recently featured one of them, depicting a famous statue portraying the horrific death of the Trojan priest Laocoön and his sons at the jaws and coils of a pair of giant snakes sent forth from the sea by Poseidon, in a ShukerNature article of mine examining this famous Greek/Trojan legend (click here to access it). Here it is again: 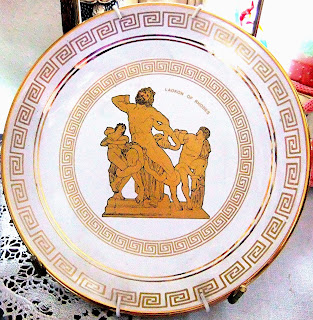 And below are some of the others: 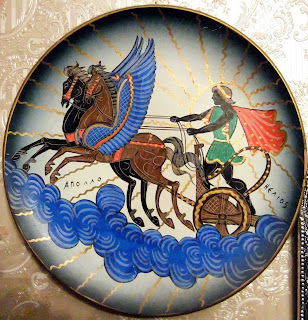 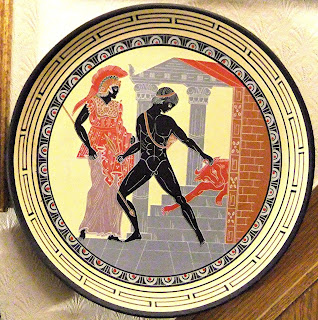 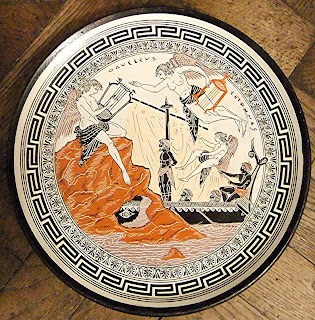 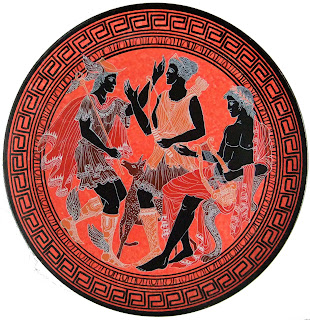 Modern-day Greek wall plate depicting Hermes, Artemis, and Apollo, with one of Artemis's sacred deer beside her (© Dr Karl Shuker) 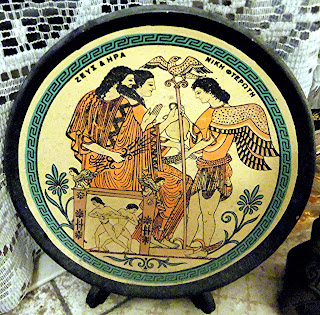 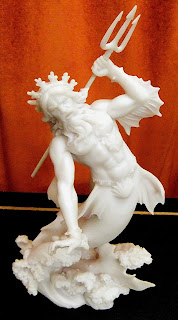 Lastly, just to be different, my resin statuette of the Greek sea god Poseidon (© Dr Karl Shuker)
Posted by Dr Karl Shuker at 15:17