TIJUANA'S 'ZEBRAS' - OR, PUTTING THE ZONKEY INTO ITS DONKEYS! 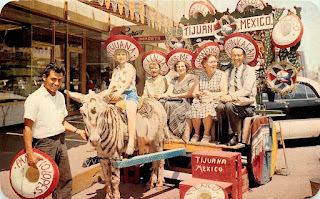 In 2004, when I visited the city of Tijuana in Baja California, Mexico, just across the border from San Diego in California, USA, I saw one of the famous 'Tijuana zebras' (aka zonkeys, but not to be confused with true zonkeys, which are zebra x donkey hybrids – click here for a ShukerNature survey of zonkeys, zorses, and zeedonks). Needless to say, these eyecatching equids are not real zebras, but instead are donkeys humanely painted with stripes using women's hair dye to make them look like zebras for photo-opportunities popular with tourists – except with me, that is.

Bizarrely, I failed not only to take a single photograph of the one 'zebra' that I saw, but also to seize the opportunity of buying an official posed photo of me with it (my only excuse for such remiss behaviour being that back then, I didn't realise just how iconic and unique an aspect of Tijuana these animals are), and even today, over 16 years later, I still regret not doing so. Fortunately, I have at least been able to purchase online some excellent vintage picture postcards depicting various Tijuana 'zebras' from bygone decades, so these will have to suffice. One example from my collection opens this present ShukerNature blog article, and here's another one: 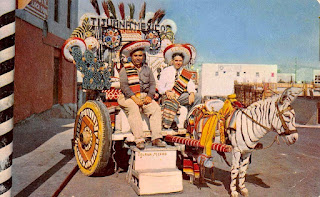 But when (and, above all, why!) did this decidedly strange tradition of painting stripes on donkeys in Tijuana begin? (Indeed, it is a tradition so intimately associated with this city that even its professional basketball team is named after these curious creatures – the Tijuana Zonkeys.)

Recollections may vary (as a certain majestic lady apparently once said about an entirely different matter…), but the majority of sources that I've read on the subject agree that it arose during or immediately prior to the World War 2 period of the 1940s. Ever since gambling in Mexico had been declared illegal, in 1935, the resulting closure of Tijuana's casino, hitherto a great tourist draw, had created a great void that somehow needed to be filled if tourists were to continue visiting the city, but how? 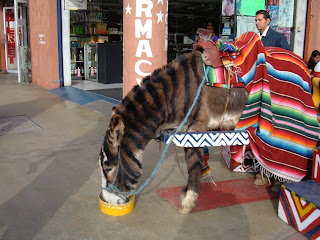 An unusual Tijuana 'zebra', inasmuch as its coat has not been whitened with powder, its stripes having been painted directly over its untreated coat's normal background colouration instead (© Broken Sphere/Wikipedia – CC BY-SA 3.0 licence)

Remembering that a pair of donkeys with carts that used to stand outside the casino had always been a favourite, frequently-photographed attraction, some of the city centre's enterprising youths hit upon the money-spinning idea of bringing in donkeys with richly ornamented carts that tourists could be photographed with, but this time for a fee.

Sure enough, they proved very popular and also very lucrative, becoming a common sight along Avenida Revolucíon (Revolution Avenue), extensively frequented by partying tourists, but there was one major problem. Back in the 1940s, standard everyday photography was almost exclusively of the black-and-white variety, which meant that Tijuana's predominantly unicoloured, monochromatic donkeys hardly showed up in the resulting photographs. If only there was a way to give these animals more visual contrast. 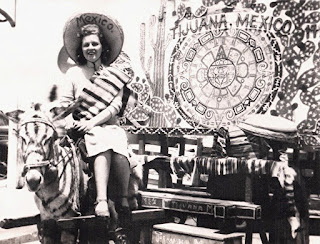 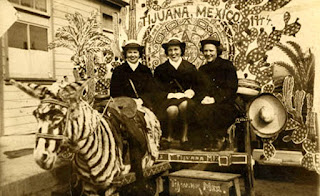 There is much controversy concerning who originated the novel idea of painting black stripes on Tijuana's tourist-magnet donkeys to achieve the required level of contrast for photographic purposes, but, regardless of his identity, by the end of the 1940s Avenida Revolucíon was home to a number of these home-made zebras, and a new Tijuana tradition was duly born. Moreover, to optimize the level of contrast exhibited by them, the donkeys usually (though not always) have a white powder applied to their coats before the black stripes are painted on, as was the case with the individual that I saw (click here to view a short video on YouTube of a typical Tijuana 'zebra').

By the late 1970s, no fewer than 25 'zebras' with their owners could be encountered in Avenida Revolucíon, each with their own specific allocated spot for attracting tourist trade. Yet by the time of my visit in 2004, this number had decreased significantly, due in no small way to the precipitous fall in the number of tourists visiting from across the border in the USA since the dreadful events of 9/11. A decade later, moreover, according to a 2013 report issued by Washington D.C.'s National Public Radio, only three Avenida Revolucíon 'zebras' remained. 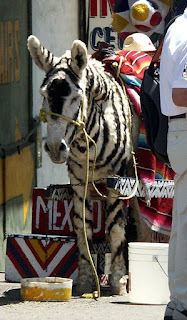 Interestingly, this particular Tijuana 'zebra' was photographed in May 2004, i.e. just weeks before I visited Tijuana – so in view of how few specimens were still present by then, it could well be the very same animal that I saw there (public domain)

In an attempt to elicit increased interest and city pride in its faux zebras, a year later, in 2014, they were formally declared part of Tijuana's cultural heritage by the Cultural Heritage Council of the State of Baja California in northern Mexico. Nevertheless, its decision was revoked in 2017, following protests from animal-rights activists, with the unnamed federal judge responsible for this legal reversal ruling that because living entities are not real estate, they cannot be considered part of Tijuana's cultural heritage. That decision does not prevent those few 'zebras' still existing from continuing to ply their trade, via their owners, on Avenida Revolucíon, although the activists have stated that they would prefer life-sized fibre-glass replicas to be used, rather than the living animals themselves.

At present, the survival of Tijuana's longstanding tradition of its tourist-touting pseudo-zebras remains uncertain. I've never read or heard about any claims of their owners mistreating them, so as long as they are indeed well cared for and not stressed by exposure to tourists, it seems a shame if these celebrated equine ambassadors for Tijuana were to disappear from Avenida Revolucíon where they have brought such colour and unique appeal for so long. 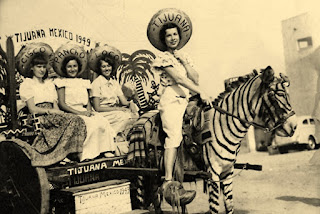 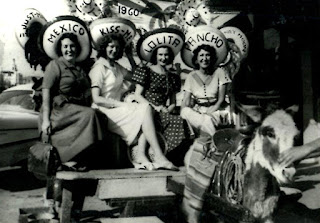 (Top) A sepia-tinted b/w photo of a Tijuana 'zebra' snapped in 1949 (public domain); (Bottom) Something different, a Tijuana 'panda'! – a Tijuana donkey painted to look like a giant panda instead of a zebra, snapped in 1960 (© owner unknown to me despite extensive online searches – reproduced here on a strictly non-commercial Fair Use basis for educational/review purposes only)

Finally: although the Tijuana 'zebras' are not cryptids, I can exclusively reveal here on ShukerNature a direct link between them and cryptozoology, courtesy of the delightful photograph presented below, which was snapped in 1974. Depicted with his family during a holiday in Tijuana, wearing the sombrero labeled Pancho, and aptly garbed in a striped sweater, the little boy sitting upon a Tijuana 'zebra' grew up to become one of today's most famous cryptozoologists. Any guesses as to his identity?

In fact, it's none other than my longstanding friend from Texas, Ken Gerhard, who very kindly emailed me this family photo for my article when I mentioned to him quite a while ago now that I was planning to blog about the Tijuana 'zebras' on ShukerNature. Thanks Ken! And now, at last, I've done so. 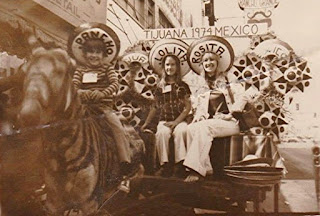 Ken Gerhard, sitting upon a Tijuana 'zebra' as a youngster with his family in 1974 during a holiday in Tijuana (© Ken Gerhard)
Posted by Dr Karl Shuker at 12:27