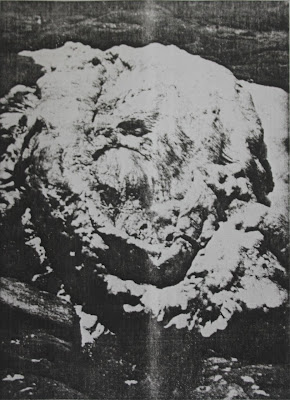 The fourth known photograph of the Trunko carcase, uncovered in Margate Museum by Bianca Baldi

Today I learnt from my Trunko co-researcher Markus Hemmler that a fourth Trunko photograph has been found!

Depicting the carcase as a classic amorphous globster, and seemingly dating back to the 1920s like the previous three (see my ShukerNature exclusives from September 2010 for further information regarding these), it was discovered in the archives of South Africa’s Margate Museum by one of my correspondents – South African artist and enthusiastic Trunko investigator Bianca Baldi, whose home town is none other than Margate itself, upon whose beach the Trunko carcase was washed ashore eight decades ago.

Consequently, utilising the Fair Dealing/Fair Use convention, I have pleasure in presenting here in the context of review and on an entirely non-commercial basis this newly-revealed Trunko photograph, which was first placed online by Bianca on her own Natal Patria website at http://natalpatria.com/post/3743069548 on 9 March 2011. If you click on the photo there, you can view an enlarged version of it.

Bianca has set up the Natal Patria site as part of a planned Trunko-investigation project, whose purpose is, she proposes:

“to use the historical documented accounts and the town’s archive to re-imagine the monster in collaboration with the local community. This project is produced in association with VANSA’s 2010 Reasons to Live in a Small Town project funded by the National Lottery Distribution Trust Fund.”

I wish Bianca every success with this, and feel sure that further significant historical documents regarding Trunko may indeed be revealed in Margate’s archives.

Meanwhile, I emailed her today concerning her exciting discovery, and have just received her reply, whose information concerning the photograph reads as follows:

"I am currently in Margate and I came across photocopies of the three images [i.e. the fourth photo, plus the two Wide World Magazine photos that Markus and I independently discovered last September] which I posted on my blog. I found these images in a document called Margate Area Annals 1917 to 1969 compiled by the president and members of the Margate Women's Institute which was housed at the Margate Museum. I am very happy to have helped you confirm that Trunko was indeed a globster."

For something whose onetime claim to fame as a spectacular living mystery beast is now well and truly dead and buried, Trunko is nevertheless doing a pretty good job of staying alive in the cryptozoological headlines!

My sincere thanks go to Bianca Baldi and Markus Hemmler for kindly sharing their information with me.
Posted by Dr Karl Shuker at 18:04