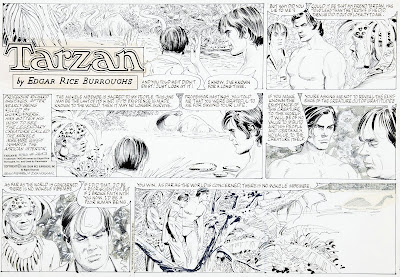 Not content back in 1963 with successfully battling a Nandi bear, in 1986 Tarzan encountered another of Africa’s cryptozooloogical heavyweights – the mokele-mbembe!

One of my many cryptozoological correspondents, the indefatigable Håkan Lindh from Sweden, who first brought the Tarzan-Nandi bear story to my attention (see here), informed me yesterday that the Tarzan Sunday comic strip ran a 12-issue story on Tarzan’s historic meeting with the mokele-mbembe, beginning in #2842 (2 February 1986) and ending in #2855 (20 April 1986). The story’s artist was Gray Morrow, and its writer was Don Kraar.

Unlike the Nandi bear, which was referred to within the story as a chalicothere yet was drawn as being entirely ursine in appearance, the mokele-mbembe is depicted exactly as described by real-life eyewitnesses. Namely, a long-necked, long-tailed sauropod dinosaur lookalike.

As I haven’t seen the entire run of strips constituting this story, I have no information to hand concerning the plot, or even how it begins and ends. So if anyone out there could post details, I’d greatly welcome them.
Posted by Dr Karl Shuker at 03:48