AHEAD BY A NOSE? OR A HEAD WITH A (VERY LONG) NOSE? HERE'S THE LETAYUSCHIY CHELOVEK - FAR-EASTERN RUSSIA'S MYSTERY MAN-BAT. 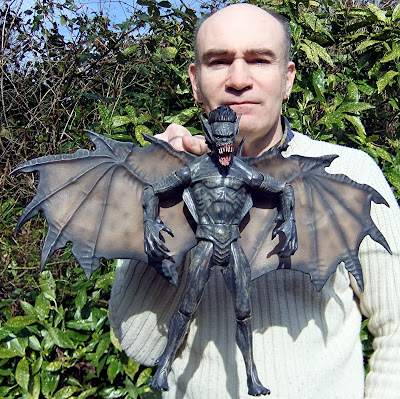 Did the bat-winged flying man seen independently by Kurentsov and Arsenyev look like this? (Dr Karl Shuker)

I’m presently compiling an updated version of the chapter on man-bats and other mysterious ‘things with wings’ that first appeared in my book Dr Shuker’s Casebook (2008). It contains many perplexing entities, but few are stranger than the examples reported from Russia. So below, in case you haven’t already seen it, is what I wrote about these latter beings. Also, it gives me the perfect opportunity to present here, as a ShukerNature exclusive, three different but equally brilliant, specially-commissioned visual interpretations prepared by Facebook friend and highly-talented artist Ben Male of the decidedly weird Petropavlovsk creature’s possible appearance – thanks Ben! 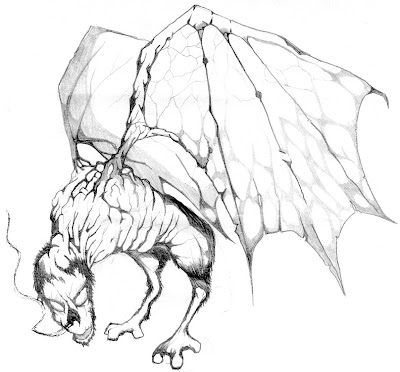 “The immense, forbidding taiga forests of the Primorskiy Kray Territory (Russian Far East) lays claim to the letayuschiy chelovek ('flying man'). One was briefly seen several years ago by hunter A.I. Kurentsov, when it flew over his fire on webbed, bat-like wings.

“On 11 July 1908, Russian author V.K. Arsenyev's dog was tracking some unseen creature leaving humanoid footprints alongside a mist-enshrouded river in the Sikhote Mountains, near Vladivostok. Suddenly, Arsenyev heard the beating of giant wings, and saw something large and dark emerge from the mist and fly over the river. Whatever it was, it emitted a bloodcurdling cry that resembled a woman's scream but ended in a lugubrious howl. When he told the local Udeyan people, they affirmed that it had been one of these flying men.

“Perhaps the most incredible report of all, however, came from Petropavlovsk, during the early 1990s, and was brought to public attention by Russian ufologist Alexander Rempel. On the tenth day after moving into a new house in this remote eastern Russian locality, the Ivanitzky family was horrified to discover a bizarre chirping beast under the bed. Attempts to dislodge this intruder by throwing slippers at it only incited it to grow larger, swelling up until it was almost three times its original size. Then, to their even greater alarm, it abruptly shot forth a long tentacle-like trunk from its nose, with which it tried to snare their legs!

“Thoroughly panic-stricken by now, the Ivanitzkys sprayed the entity with household chemicals, and soon afterwards it rolled over to a far corner and lay there, apparently dead. When they cautiously examined it, they saw that in general body form it resembled a dog, but it had short bluish fur, two three-fingered paws, and a flattish humanoid face with very large eyes, a tiny lipless mouth, and a triangular hole instead of a true nose. Most striking of all, however, were its strong bat-like wings, which yielded a 4.5-ft span.

“Frightened that they may have killed some exotic, State-protected species, they disposed of the body in a nearby ditch; but when they looked there a short while later, it had gone.” 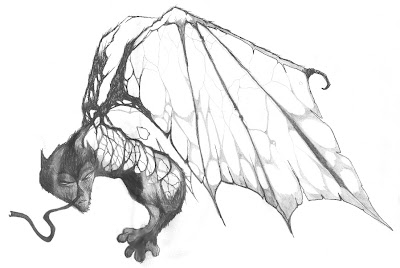 It seems scarcely believable that this story is genuine, and even if it is, the thoroughly bizarre trunked beast of Petropavlosk sounds far more like some overtly exotic interdimensional visitor or extraterrestrial alien than anything that has ever originated on the Planet Earth that we know. Nevertheless, if nothing else, it will be interesting to see if anyone has ever read or heard of something similar, either from Russia or from elsewhere. And if you have indeed done so, please send in details! 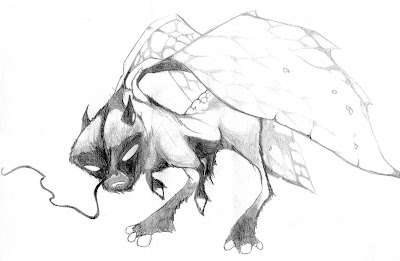 After reading this post, British cryptozoologist Glen Vaudrey emailed me on 24 March to mention that the Petropavlosk creature reminded him of the night-gaunts that appear in various writings by H.P. Lovecraft (specifically, the poem 'Night-Gaunts', and the novella The Dream-Quest of Unknown Kadath). The Wikipedia entry for the night-gaunts (which, incidentally, Lovecraft based upon his childhood nightmares) contains the following description:

"Nightgaunts have a vaguely human shape, but are thin, black, and faceless. Their skin is slick and rubbery. They sport a pair of inward-facing horns on their heads, and have clawed hands and a long barbed tail which is used to "tickle" their victims into submission. They can fly using a set of membranous wings. They make no sound."

Glen may have a point!

All three pencil sketches of the Petropavlosk creature reproduced here are the exclusive copyright of Ben Male.