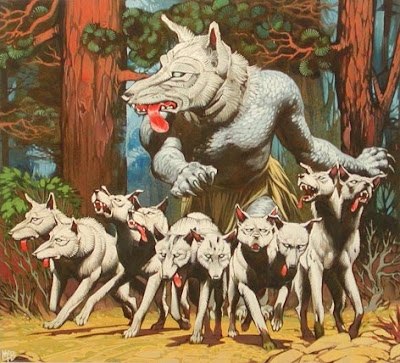 Kopuwai, a dog-faced maero from New Zealand (Angus McBride/Finding Out)

In a recent ShukerNature post (click here), I presented the entire set of spectacular and much sought-after cryptozoological and zoomythological illustrations by Angus McBride that appeared on the back covers of 36 issues of Finding Out – a British partwork magazine for children that was published during the 1960s.

Many of the creatures so depicted were very familiar, but a few were rather less so, and one in particular – due in no small way to Angus McBride’s extremely dramatic illustration – has led to my receiving a number of requests for information regarding it. The creature in question was the maero (featuring on the back cover of Vol 16 #12 of Finding Out in 1966), and McBride’s illustration of it is the stunning artwork that opens this present blog post of mine.

As it happens, beneath each of these back cover images in Finding Out was a concise account of the entity that it depicted, so I am presenting as follows the account that appeared there for the maero:

“Dense rain forests, great mountains and river gorges were the homes of the maero, strange hairy people who lived in the South Island of New Zealand.

“Some stories say that they were dog-faced ogres, but these were not true maero. The Maoris' highly complicated folklore includes many different types of enchanted beings and monsters.

“One of the dog-faced ogres was Kopuwai of the Matau, who had the body of a man, the head of a dog and was covered with scales like a fish. He had a special understanding of dogs and the dog-like characteristic of a keen sense of smell.

“Kopuwai had a pack of fierce, two-headed dogs which helped him in his hunt for food. And his favourite food was men and women.

“One day he saw Kaiamio of the Rapuwai tribe and captured her for his wife. He kept her tied to a long piece of rope, but as the years passed Kaiamio did not give up hope of escaping from the horrible monster.

“Finally she managed to build a raft, and she escaped from the cave high in the mountains down the river and back to her own people. Kopuwai was so angry that he drank all the water in the river until it was dry (his name means "Water Stomach").

“Kaiamio brought her tribesmen back to the cave where they lit a fire and battered Kopuwai to death when he tried to escape through the vent in the top.

The dogs escaped and fled to another cave where they were turned to stone and could be seen afterwards with their front paws hanging out of the cave.”

Thus ended Kopuwai, a veritable cynocephalus. As for the genuine maero (also known as the macro), I documented this little-known arboreal man-beast as follows in my book From Flying Toads To Snakes With Wings (1997):

“One of the most unlikely homes for furry mystery beasts must surely be New Zealand. Separated from all other land masses for over 64 million years, this dual-island country does not harbor any native species of terrestrial mammal - officially. In reality, cryptozoologists have long been perplexed by the supposed existence here of a mystifying otter-like creature termed the waitoreke, with numerous eyewitness records on file. However, this is not the only mystery mammal documented from New Zealand.

“Virtually unknown is a strange tree-climbing entity called the macro. In a letter of May 2 1846 to English zoologist J.E. Gray (Annals and Magazine of Natural History), New Zealand's Governor, Sir George Grey, noted that the natives had described to him:

‘...another new animal which they call a 'Macro'; they say it is like a man covered over with hair, but smaller and with long claws; it inhabits trees and lives on birds; they represent it as being strong and active, and state they are afraid of them. I hope in a few weeks to be able to visit the country (mountains covered with forests) which the animals live in, and as I am not afraid of them, I hope I shall send you one before long.’

“Yet despite Grey's promise, nothing more was heard. As for J.E. Gray, it is clear that he was not previously aware of such a creature, because he did not mention it in his 'Notes on the Materials at Present Existing Towards a Fauna of New Zealand', within Ernst Dieffenbach's Travels in New Zealand (1842).

“There is a species of non-native mammal currently thriving in New Zealand that initially seems to provide a satisfactory identity for the macro. This is the brush-tailed possum Trichosurus vulpecula [see photo below], a superficially lemur-like marsupial that originated from Australia. Unfortunately, however, the first specimens introduced into New Zealand did not arrive here until 1858. 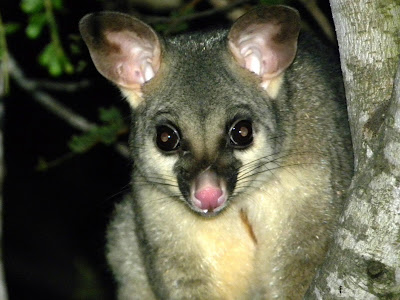 “Even the macro's name is controversial. As I learned from Canterbury Museum researcher Ron Scarlett, 'macro' is a corruption. If a genuine Maori word, it would be spelled 'makaro', 'makero', 'makiro', or 'makuro' (the letter 'c' does not exist in the Maori language, and consonants rarely occur consecutively within a word - they are almost always separated by a vowel). Yet none of these, with any meaning applicable to an animal, is listed in Williams's standard Dictionary of the Maori Language.

“Thus I concluded that if the macro is genuine, it must now be extinct - unless it never actually existed in New Zealand to begin with! Perhaps it was only a folk memory of a monkey, lemur, or Asian loris spied by the Maoris' ancestors during their travels, whose description was preserved orally through successive generations, but gradually became so distorted in the telling and retelling that it ultimately 'transformed' into a seemingly unknown species allegedly frequenting the Maoris' new home, New Zealand.

“This scenario is reminiscent of the version proposed by Dr Bernard Heuvelmans in On the Track of Unknown Animals (1958) for Australia's bizarre yara-ma-yha-who - a sucker-fingered, toothless, frog-like dwarf with vampiresque tendencies.

“Although no such entity has ever been formally discovered here, in overall appearance it readily recalls those small lemur-related primates from southeast Asia known as tarsiers. Accordingly, Heuvelmans suggested that perhaps the yara-ma-yha-who comprises a memory of tarsiers that was retained by Malays invading Australia prior to the white man's arrival here.

“In reality, however, the macro is neither extinct nor a folk memory of something from beyond Australia - in fact, it never existed at all! I very recently solved the mystery of the macro while perusing through A.W. Reed's A Treasury of Maori Folklore (1963). Once again, it contained no mention of any macro - but it did refer, and in detail, to entities called the maero. Confined in most reports to South Island, the maero has been conjectured by researchers to be the last remnants of a primitive tribe of people called the Ngati-mamoe, driven by the more advanced Maoris into Fjordland's virtually inaccessible valleys and mountains.

“According to traditional accounts, the maero were said to be hairy, with long finger nails that they used to catch birds and fishes. Two male maero were allegedly captured a long time ago by the Maoris of Pelorus Sound, and supposedly sported four-inch-long nails. These descriptions of the maero and Grey's report of the macro closely match one another. And their names do too - so much so that there is little doubt that 'macro' in Grey's report was simply a printing error, with 'maero' as the intended name.” 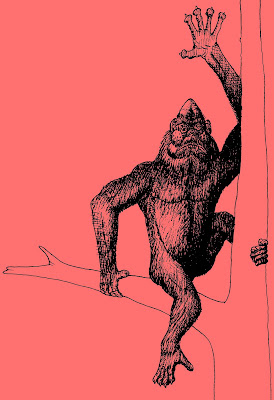 Representation of the yara-ma-yha-who (Tim Morris)

Incidentally, as I also noted in From Flying Toads To Snakes With Wings, the maero should not be confused (although it often is) with a much larger, man-like entity reputedly residing on North Island's Coromandel Peninsula (and Mount Moehau in particular), east of Auckland, and variously described as silver-haired or red-furred (based respectively upon sightings of old and young specimens?).

Usually referred to as Coromandel Man or the Moehau Monster, this human-sized biped has been reported spasmodically since the late 1930s, sometimes as a single being, or as one of several inhabiting this area. Many identities have been suggested, including an undiscovered bigfoot-like species, an eccentric hermit, or even a stranded extraterrestrial alien. More likely is that the sightings feature the last of the mainland Morioris or even involve racial memories of them. The Moriori were a tribe of Maori people (once thought to be pre-Maoris) that emigrated from mainland New Zealand to the Chatham Islands prior to 1500 AD, where they were later conquered and slaughtered in large numbers by other invading Maoris, who also refused to permit them to marry one another, so that pure-bred Morioris eventually died out there (the last apparently dying in 1933).
Posted by Dr Karl Shuker at 23:21