WHATEVER HAPPENED TO THE PURPLE MACAW? 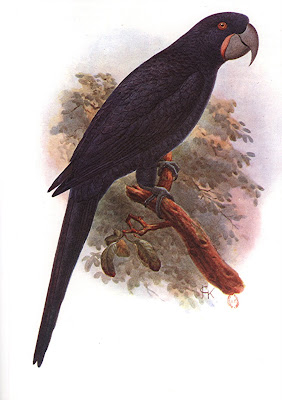 
Famed for their gaudy plumage, macaws come in many colours, but purple has never been one of them – or has it?

The genus Anodorhynchus – the so-called blue macaws - contains three present-day species (though one of them, the glaucous macaw, may have lately become extinct). Interestingly, in terms of plumage colouration, this genus's trio can be arranged in a very neat gradation, beginning with, as its name indicates, the intense hyacinth-blue shade of the hyacinth (or hyacinthine) macaw A. hyacinthinus, then moving subtly into the slightly more turquoise-blue hues of Lear's macaw A. leari, which then transforms further, yielding a paler, turquoise-green shade, in the aptly-named glaucous macaw A. glaucus. 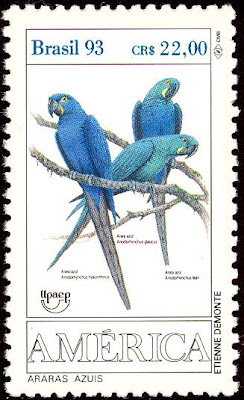 But what if this colour gradation were also extrapolated in the opposite direction? That is, in addition to the hyacinth macaw's striking blue hue faintly greening into turquoise and thence even more so into a glaucus tone, how about deepening it, to yield a macaw whose plumage was a darker, predominantly violet or purple shade? If this quartet of macaws were then arranged in a continuous linear spectrum of transforming colour, running from purple into blue into turquoise-blue into pale turquoise-green, the line-up would be: purple macaw, hyacinth macaw, Lear's macaw, and glaucous macaw. Of course, the purple macaw is purely hypothetical – isn't it?


In reality, such a bird may indeed have existed. Based upon certain centuries-old eyewitness accounts, in 1905 no less an ornithological authority than Lord Walter Rothschild - founder of the famous ornithological museum at Tring in Hertfordshire (now part of London's Natural History Museum but still based at Tring) - formally described a mysterious long-extinct macaw-like bird from Guadeloupe, which he christened Anodorhynchus purpurascens, the purple macaw (also referred to by some authorities as the violet macaw, and sometimes accorded the incorrect specific name purpurescens). His description of it was published in volume 16 of the British Ornithologists Club's Bulletin. 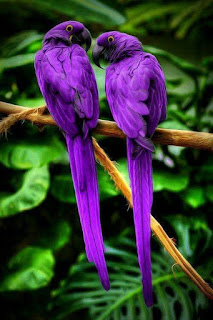 A pair of photoshopped purple macaws (original source unknown to me)

Rothschild also included this species in his book Extinct Birds (1907), together with the specially-prepared colour plate included here in this ShukerNature post of mine. His original source of information was a brief account penned by a 'Don de Navarette', entitled 'Le gros Perroquet de la Guadaloupe [sic]', which appeared in Rel. Quat. Voy. Christ. (1838). This writer was actually none other than Martin Fernández de Navarrete y Ximénez de Tejada (1765-1844) - a Spanish sailor-historian who rediscovered an abstract by Spanish reformer-bishop Bartolomé de las Casas (1484-1566) of the log made by Christopher Columbus during his first voyage to the West Indies.

This account stated that according to Columbus, who visited the island in November 1493 during his second New World voyage, there lived on Guadeloupe a very large type of macaw that was entirely of a deep, intense violet/purple colour, and which the native Carib people referred to as the oné couli. No such bird lives there today, however, and neither a single preserved specimen nor even an illustration prepared directly by an eyewitness exists of this enigmatic purple macaw.

Conversely, until the early 18th Century, a second species of parrot with violet feathers definitely did live there. This was the Guadeloupe amazon parrot Amazona violacea, which was formally described and named by German naturalist Johann Friedrich Gmelin in 1789, around which time it became extinct, due to hunting for food and wholesale clearance of the forests in which it thrived. 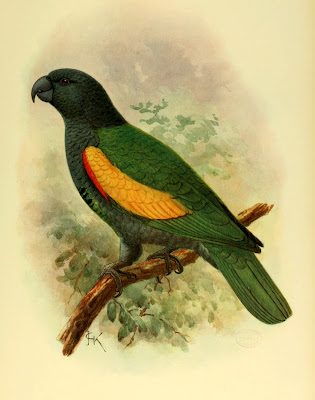 
Although, just like the purple macaw, there is no known preserved specimen of the Guadeloupe amazon in existence, unlike the purple macaw this showy parrot is nonetheless known from good, consistent descriptions of it given by several naturalists (such as Jean-Baptiste Labat, and French zoologist Mathurin Jacques Brisson) and travellers (notably French missionary Jean-Baptiste Du Tertre). Consequently, in his authoritative book Extinct and Vanishing Birds of the World (2nd revised edit., 1967), ornithologist James C. Greenway Jr from the American Museum of Natural History suggested that Navarrete's description of the violet-plumed oné couli may in fact have been nothing more than "a careless description of A. violacea".

In my view, however, it would need to have been an exceptionally careless description in order to confuse a long-tailed parrot the size of a macaw with a much smaller, short-tailed amazon. Moreover, whereas the purple macaw was said to be entirely violet/purple, in the Guadeloupe amazon this particular colour was confined predominantly to its head and neck (and even there it was a slaty black-violet rather than an intense purple). In stark contrast, this amazon's back, tail, and much of its wings and underparts were deep green, with portions of its wings additionally sporting bright yellow, red, and jet-black feathers. Not only with regard to its size and shape, therefore, but also in relation to its multicoloured plumage, I fail to see how this species could in any way be mistaken for a wholly purple macaw. 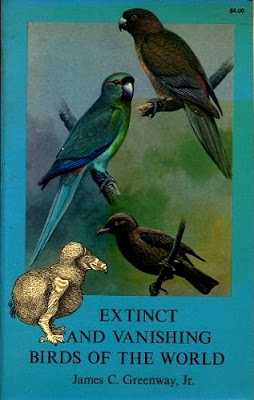 
A second suggestion offered by Greenway, and one that is also supported by various other ornithological scholars, is that Guadeloupe's purple macaws may simply have been hyacinth or even Lear's macaws imported by trading natives into Guadeloupe from the South American mainland. Again, however, it is difficult to see how the unequivocally blue plumage of the former species or even the slightly more turquoise tones of the latter one could come to be described as deep violet or purple.

So here, leaving it lingering perpetually in a shadowy ornithological limbo as a avian of tantalising ambiguity unless any additional information concerning it should one day become available, is where we must take our leave of Guadeloupe's very perplexing purple macaw – a bird that may, or may not, have existed, but which, if it truly did, and was indeed a macaw, must surely have been one of the most beautiful creatures ever seen by the eyes of its extremely fortunate beholders.


UPDATE - DON'T FORGET ABOUT THE BLACK MACAW EITHER!


On 16 May 2012, I received a much-anticipated newly-published book – Extinct Birds, by Julian P. Hume and Michael Walters. Unquestionably the most detailed book ever prepared on the subject, it documents many extraordinarily obscure species and subspecies that, despite my longstanding interest in such birds, were new to me.

One of these was the black macaw Anodorhynchus ater, a truly cryptic species in every sense. It was first documented by De Laet in 1630, and then described by British naturalist Dr John Latham in 1781 (who dubbed it the black macaw), followed by German naturalist Johann F. Gmelin in 1788 (basing his description upon Latham's and christening it Psittacus ater – its first taxonomic name). According to these accounts, the black macaw was native to Guyana, but Hume & Walters consider it to be an invalid taxon based upon inadequate descriptions. I have yet to see the three accounts noted above, but if I can locate any of them, I will expand this section accordingly at a later date.

Incidentally, this mysterious macaw should not be confused with the very familiar hyacinth macaw A. hyacinthinus, which is occasionally dubbed the black macaw, due to its local Tupi Indian name, 'arara una', which translates literally as 'dark macaw' or 'black macaw' (even though its plumage is blue!).