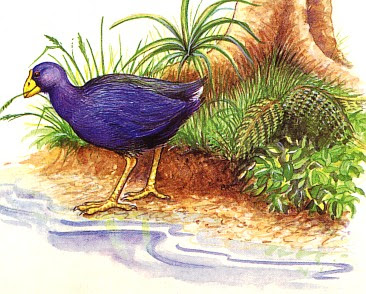 Representation of the koao* (Philippa Foster)

One of the most celebrated modern-day artists is Paul Gauguin (1848-1903), a figure whose name may not be instantly associated with mystery birds, as his fame lies far more with paintings of dusky South Sea Island maidens than with ornithological subjects. Having said that, however, it may well be that one of his paintings has considerable crypto-twitching significance. One of his last works was painted in 1902while on the small Pacific island of Hiva Oa in French Polynesia's Marquesas group, and is now at the Museum of Modern and Contemporary Art in Liege, Belgium. Entitled 'The Sorcerer of Hiva Oa', it depicts a tall man in a striking red cape standing near a forest - but what is most intriguing from a cryptozoological viewpoint is the brightly-plumaged bird portrayed in the painting's bottom-right corner, and seemingly held in place by a dog, which is seizing it with its jaws. 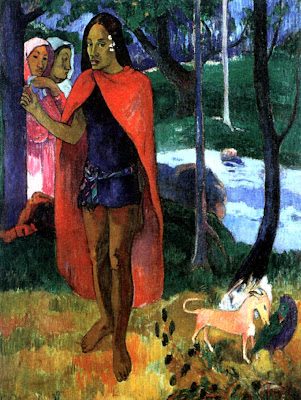 Remarkably, this bird looks very like the famous New Zealand takahe Porphyrio mantelli, the large flightless gallinule thought to be extinct until rediscovered on South Island in 1948. In recent years, specimens of this greatly-endangered species have been transferred to, and have successfully bred on, the small island bird sanctuary of Tiritiri Matangi, which I visited in November 2006 and where I was greatly privileged to see wild takahes at close range. Hence I can confirm that Gauguin's bird does indeed look very like - though not identical to - a takahe; the main difference is that the mystery bird's head is green, whereas the takahe's is dark blue. But what could any such bird be doing far from New Zealand, on the tiny South Pacific island of Hiva Oa? No such species is known to exist here. 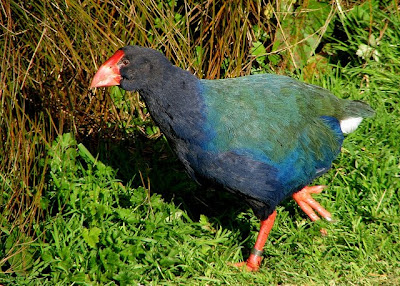 Nevertheless, two aspects of the painting clearly indicate that the bird was indeed native to this island. Firstly, the sorcerer depicted by it in 1902 was a famous Hiva Oa local of that time called Haapuani. Secondly, there is a distinct suggestion that the bird had been newly-captured on the island during a hunt, because Gauguin depicted it gripped by the jaws of a hunting-type dog. 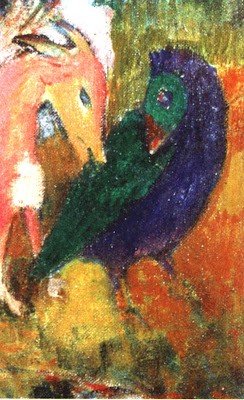 Close-up of the mystery bird in Gauguin’s painting

What makes this painting so important cryptozoologically, as brought to attention by French researcher Michel Raynal in a number of his writings, is that Gauguin's rara avis compares very closely with descriptions of a still-undescribed, uncaptured species of bird reported on several occasions from Hiva Oa and known locally here as the koao. The latter mystery bird's most famous eyewitness to date was none other than the Norwegian voyager Thor Heyerdahl. In his book Fatu-Hiva (1974), Heyerdahl reported that while visiting Hiva Oa in 1937, he briefly spied a hen-sized flightless bird scurrying rapidly between some tall ferns, almost like a rabbit through a burrow, and was told by the islanders that this was the koao. 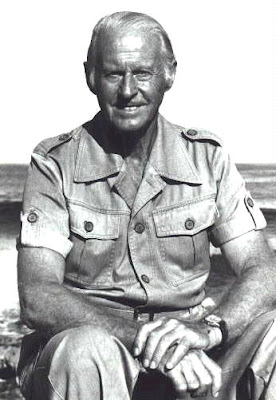 Moreover, subfossil remains of an officially-extinct gallinule, Porphyrio paepae, have been uncovered on Hiva Oa, leading to the exciting possibility that this species and the elusive koao are one and the same. And perhaps, unknowingly, Gauguin has left us a unique portrait of this bird.

This post is inspired by a section from my book Karl Shuker's Alien Zoo: From the Pages of Fortean Times (CFZ Press: Bideford, 2010).
Posted by Dr Karl Shuker at 02:10