MIRAPINNA ESAU - A FURRY FISH FROM THE AZORES 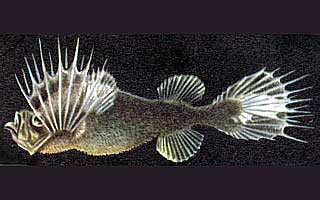 A century ago saw the discovery of one of the world's most unusual fishes, Mirapinna esau, the hairy fish, whose controversial, highly unexpected zoological identity has only recently been exposed. Here is its fascinating history - excerpted from my soon-to-be-published latest book, The Encyclopaedia of New and Rediscovered Animals.

The year 1956 saw the description of a 2.5-in-long hump-backed fish so grotesque in appearance that it required a wholly new family to accommodate it. Caught many years earlier (in June 1911) at the surface of the mid-Atlantic about 550 miles north of the Azores, this extraordinary fish seemed to be covered in hair! Closer examination, however, disclosed that its 'fur' was really a mass of living body outgrowths (hair, conversely, is composed of dead cells) containing secretory cells. Their function is unknown, though they may produce distasteful compounds to deter would-be predators.

No less extraordinary than its 'hair' were its fins. The pelvic fins were large and wide, their wing-like appearance additionally enhanced by their long rays, diverging outwards from a broad base, and directed upwards rather than downwards. Equally odd was its pair of very small, reduced pectoral fins, placed much higher up on its body's flanks than those of most other fishes. Most peculiar of all, however, was its tail fin, because the rays in the lower half of its upper lobe uniquely overlapped those in the upper half of its lower lobe, and like the rays of the pelvic fins they were extremely long and spine-like. Little wonder that this bizarre species, commonly termed the hairy fish, was given the generic name Mirapinna - 'wonderful fins'; its full scientific name is Mirapinna esau (after Jacob's hairy brother, Esau, in the Bible). 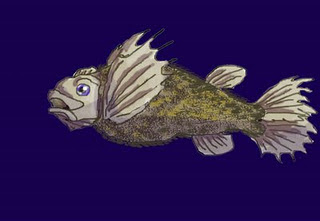 Until very recently, the hairy fish, along with two previously described genera of much slimmer fishes (Eutaeniophorus and Parataeniophorus, collectively containing five species known as tape-tails), was placed by many authorities within a distinct order, Lampridiformes, set apart from all others. In January 2009, however, an international team of ichthyologists published a revelatory paper in which they announced that their morphological and genetic studies of specimens of these fishes had shown them to be nothing more than juvenile forms of certain deepsea species known as whalefishes, housed in the taxonomic family Cetomimidae. After more than half a century, therefore, the hairy fish with the wonder fins was a wonder no longer, and the family Mirapinnidae is now obsolete.

A whalefish
Posted by Dr Karl Shuker at 21:07