FELIS - LOST CONSTELLATION OF THE CAT 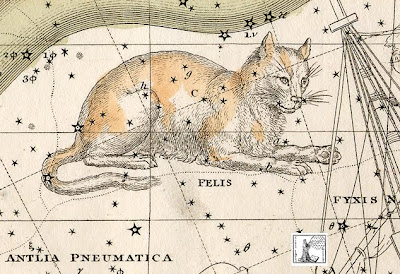 Today, only 88 constellations in the night sky are formally recognised by the International Astronomical Union (IAU), but many additional ones were once described and named too. One of these was Felis, the Cat, which was originally designated in 1799 by French astronomer Joseph Jérôme de Lalande, a noted cat-lover who had lamented the domestic cat's absence in a sky populated by no less than three different domestic dog constellations (Canis Major, Canis Minor, and Canes Venatici), as well as three wild cats (Leo, Leo Minor, and Lynx). And so Felis, situated between the constellations of Antlia (the Air Pump) and Hydra (the Water Snake), was duly added to the list, becoming the thirty-fourth animal constellation (albeit a rather small one).

Accordingly, in 1801 it was portrayed in German astronomer Johann Elert Bode's magnificent atlas of the heavens, Uranographia Sive Astrorum Descriptio (the largest star atlas ever published, containing the positions of over 17,000 stars), as well as in a map of 1805 prepared once again by Bode. 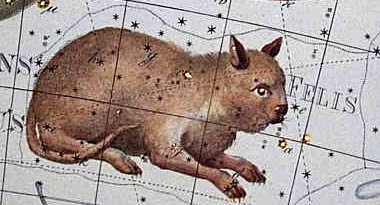 Felis, as depicted in Bode's Uranographia (1801)

It also appeared in an equally spectacular star atlas by Alexander Jamieson, entitled Celestial Atlas Comprising a Sistematic [sic] Display of the Heavens, which was published in 1822.

In later years, however, just like numerous other once-recognised constellations, Felis lost its place in the night sky. After having been deemed by French astronomer Nicolas Camille Flammarion to be superfluous, it was not included in the final list of 88 constellations drawn up and officially approved by the IAU in 1922. And that is why – just like other 'extinct' constellations such as Rangifer the Reindeer, Bufo the Toad, Cerberus the Three-Headed Hound of Hades, Hippocampus the Sea Horse, Noctua the Owl, Limax the Slug, Apis the Bee, Dentalium the Tooth Shell, Gallus the Rooster, Anguilla the Eel, and (truly!) Manis the Pangolin, to name but a few - Felis the Cat no longer gazes down upon us from the Heavens far above. 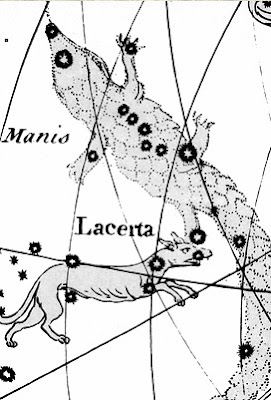 Manis - the Pangolin constellation - as designated and depicted in 1754 by John Hill within his Urania: A Compleat View of the Heavens; Containing the Ancient and Modern Astronomy, in Form of a Dictionary

This blog post is extracted from my forthcoming book, Last Night I Saw The Strangest Cat: A Cat-alogue of Feline Magic, Mythology, and Mystery.
Posted by Dr Karl Shuker at 22:43