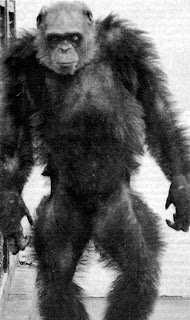 Swett asked Chicago University geneticist Dr David Ledbetter to examine Oliver's chromosomes, which he did in autumn 1996. His studies revealed that Oliver had 48 (not 47) chromosomes, thus disproving the earlier claim and confirming that he had a normal chromosome count for a common chimpanzee. Swett, however, desired further analyses to pin-point Oliver's precise status. Accordingly, he persuaded DNA analysis expert Dr John J. Ely from Texas's Trinity University and cytogeneticist Dr Charleen Moore from Texas University's Health Science Center to conduct the most extensive genetic studies ever undertaken with Oliver. Their results were published in 1998 by the American Journal of Physical Anthropology and disclosed the following details.
Footage of Oliver from the 1990s UK TV show Fortean TV showing him walking fully upright bipedally (Luke Campbell (director)/Rapido TV/Channel 4 - reproduced here on a strictly non-commercial Fair Use basis for educational/review purposes only) 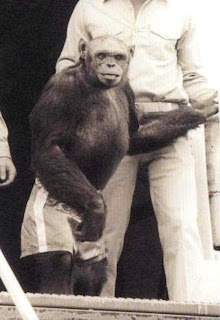