A BABY CHUPACABRA? YOU'RE HAVING A LAUGH – OR A GAFF!! 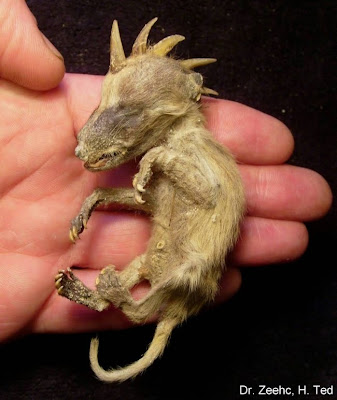 A baby chupacabra? Read on…!!

The chupacabra is unquestionably one of the most famous and iconic mystery beasts of modern-day cryptozoology. So when a photograph purportedly depicting a mummified baby chupacabra appears online, it is evidently going to attract plenty of attention – and the above example opening this present ShukerNature blog post is certainly no exception.

Perusing a number of websites containing and discussing it, the most commonly repeated claim made by them is that this supposed chupacabra infant was discovered under an abandoned barn in a small village in Chiapas, Mexico, during the barn's demolition in or around July 2007, and cannot be identified with any known species of animal because a series of DNA, fur, and tissue tests all proved inconclusive. As can be seen here, the photograph is copyrighted to the somewhat oddly-named Dr Zeehc H. Ted.

The reality, of course, is very different. Even a brief examination of the well-preserved specimen is enough to confirm that it is a gaff, i.e. a fake taxiderm specimen composed of body parts from various different species deftly combined together. The principal component appeared to be a baby mammalian carnivore, almost certainly a raccoon Procyon lotor, judging from its dentition, shape of its paws, and general body and facial conformation. The spines inserted upon its head resembled claws.

In search of clues concerning its real origin, I scoured the Web and soon uncovered the truth behind the travesty (albeit an extremely skilfully-executed travesty!). Just as I suspected, the 'baby chupacabra' was a fake – one of many spectacular examples produced by a male United States (and wonderfully ingenious) gaff creator on the deviantart.com website, who memorably refers to himself as 'Creator Of Things That Should Not Be', and whose user name is dethcheez, This in itself is (or should have been) a major clue to anyone attempting to track down the photo's origin – the name of the latter's copyright owner, Zeehc H Ted, is of course dethcheez spelt backwards!

As for the specimen itself: the deviantart.com page containing the original photograph of it, and which can be directly accessed here (the hand holding the specimen was added later to this photo), was uploaded on 26 April 2007 by its creator, dethcheez, who unambiguously labelled it as a "Mummified Baby El Chupacabra Sideshow Gaff Created from 100% Real Parts". But what are these parts? Reading down the comments below the photograph, all is swiftly revealed, because they were correctly identified on 10 December 2009 by a viewer with the user name inkaholic1089, as verified in a comment posted underneath that of inkaholic1089 by dethcheez himself two days later. Namely, a baby raccoon with the claws of a snapping turtle Chelydra serpentina used for its spines. 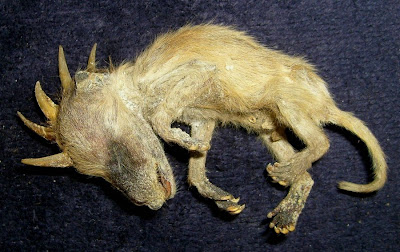 Another controversial carcase is controversial no longer – and can thus be filed away alongside the likes of the Montauk corpse, Trunko, the Feejee mermaid, and many other monsters of misidentification and fabulous frauds. Moreover, it demonstrates how specimens clearly identified as fakes by their creators (as I noted earlier, dethcheez unequivocally referred to it on his deviantart site as a manufactured gaff) are nonetheless all-too-often deemed genuine and erroneously circulated as such online by many other, less discerning people. It also emphasises, however, as I have previously shown with the fake black lion photos circulating online (click here and here), just how easy it can often be to expose such specimens' true nature simply by taking time to trace their origins via the internet. This is why it is so surprising to me that such searches are not conducted more often and more vigorously, because this approach would soon eliminate them from the database of genuine cryptozoological mysteries. 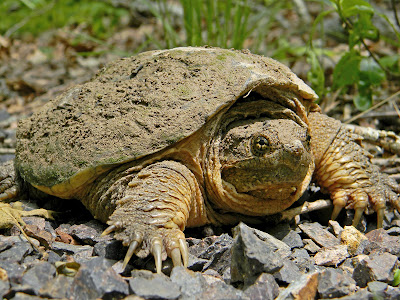 Of course, removed entirely from a cryptozoological perspective, there is no question whatsoever that as artistic creations, the gaffs of dethcheez are exceptionally well-produced, compelling, and diverse – other expertly-manufactured examples from this artist's bedazzling menagerie of fantasy fauna include a Jersey devil corpse, a newly-discovered unicorn shark, a vampire mummy's head, a Burmese centi-spider, a mummified devil turkey head, a two-tailed twelve-limbed sand scorpion, a mummified alien mothman (a novel variation on the Jenny Haniver/devilfish theme!), a snake-headed terrapin, a mummified baby dragon and a baby dragon skeleton, a giant clawed centipede, a mummified baby unicorn, the mounted heads of Peruvian vampire fishes, a mummified winged piglet, plus a vast assortment of shrunken heads, and much much more!

But don't be content with my meagre verbal descriptions of these marvels! Click here and pay a visit yourself to dethcheez's deliciously dark realm of undeniably unnatural history! 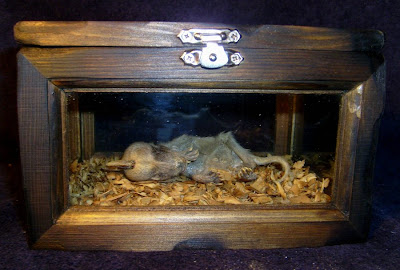 Almost forgot: if you're wondering where this baby chupacabra gaff is right now, some lucky ebay bidder out there may well have the answer - and the specimen - because dethcheez auctioned it on ebay, and the auction ended on 29 April 2007. So if the winning bidder (assuming that it did sell) is reading this ShukerNature post, I'd be delighted to hear from you, as it would be good to know something about this fascinating exhibit's current location.