MY VERY OWN CRYPTO-BIRD? - QUAILING AT THE POTENTIAL REDISCOVERY OF A LONG-LOST SPECIES 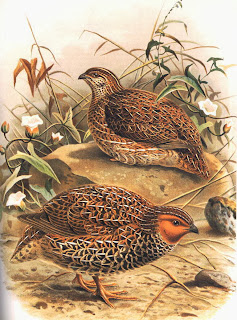 The New Zealand quail or koreke

In November 2006, I visited the island bird sanctuary of Tiritiri Matangi, off Auckland, New Zealand, home to some of this country’s rarest birds, including the famous takahe Porphyrio mantelli, the saddleback or tieke Philesturnus carunculatus, the North Island wattled crow or kokako Callaeas cinerea wilsoni, and the stitchbird Notiomystis cincta, all of which I was fortunate enough to espy in the wild state here. Walking back down from the island’s summit at the end of my visit, en route towards the ferry that would return me to Auckland, I noticed on the path up ahead two brown quail-like birds. They seemed rather large for Australian brown quails Coturnix ypsilophora, a non-native species that I knew had been introduced here long ago (as elsewhere in New Zealand), but they were otherwise similar and were definitely quails, as I readily confirmed with my binoculars before they scurried away into the undergrowth.

I thought no more of my sighting until May 2007. That was when I was startled to learn that this tiny island may still be home to a species hitherto thought to have become extinct everywhere as far back in time as 1875. And the species in question? The New Zealand quail or koreke Coturnix novaezealandiae. Larger than the Australian brown quail and once common throughout New Zealand, by 1840 the koreke had become much less so, due to habitat destruction for farming. By 1870, it had been exterminated on North Island, and by 1875 it had also disappeared on South Island, since when the koreke has been regarded as extinct.

In May 2007, however, I read a report stating that Massey University ornithological researcher Mark Seabrook-Davison had begun conducting DNA tests upon the quails on Tiritiri, because various researchers suspected that at least some of these birds might not be Australian quails at all, but may instead be surviving specimens of the koreke! If this were true, it meant that back in November 2006 I could well have seen an officially long-extinct, still formally undiscovered species.

Sadly, however, Seabrook-Davison's tests subsequently revealed that the Tiritiri birds, although indeed larger, were genetically identical to the Australian brown quail. So New Zealand’s own vanished species had not been resurrected after all. But for a few precious months, I had experienced the magic of what it must be like to encounter a cryptid. And in any case, I had also seen, at very close range, a celebrated former cryptid – the spectacular takahe. So my visit to Tiritiri Matangi was still a notable success for me, and will always remain one of my fondest memories of my travels around the globe.