DUPLICATING THE DIRE WOLF AS A DOMESTIC DOG? 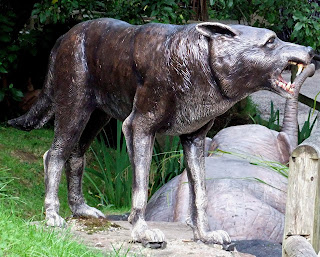 Larger than today’s grey wolf Canis lupus, the formidable North American dire wolf C. dirus is famous for the numerous specimens discovered in California’s La Brea Tar Pits, but it had become extinct around 10,000 years ago. However, there is a remarkable ongoing project dedicated to achieving a dramatic dire wolf resurrection...of sorts. 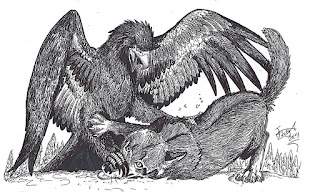 A fascinating breeding program that has been attracting plenty of media attention lately is the Dire Wolf Project (click here to visit its official website), launched by the National American Alsatian Breeder’s Association, because it aims to recreate within a domestic breed of companion dog the basic dire wolf body, size, and bone structure. In short, not a true, genetically-restored dire wolf, but rather a domestic dog that mirrors the dire wolf’s phenotype (external morphology) as closely as possible. 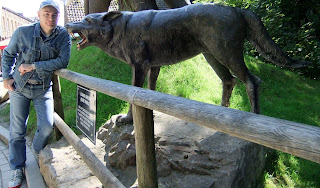 The American Alsatian, first created in 1987 from matings between original Alsatians (German Shepherd Dogs) and Alaskan Malamutes and initially referred to as the North American Shepalute, is itself the first product of this selective breeding project. However, the project’s continuing long-term plan is to refine its morphology still further, ever increasing its outward similarity to the genuine dire wolf, having subsequently introduced Anatolian Shepherd Dogs, English Mastiffs, and the Great Pyrenees into the breeding mix, because each of these possesses certain morphological attributes recalling those of the dire wolf. 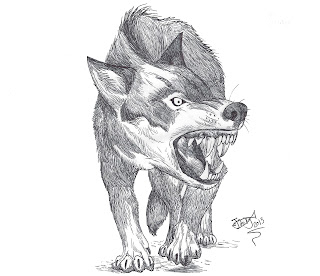 Conversely, no dogs with any recent bona fide lupine ancestry have been used, because the goal is to restore or reconstitute the dire wolf in phenotype only – breeding back the large, round bones, the massive feet, and the broad head found in the skeletal structure of dire wolves studied by American palaeontologists – and not this wild prehistoric species’ behaviour or exact genetic composition. Nevertheless, a domestic dog duplicating the outward morphology of a bona fide dire wolf will still be a very impressive creature, to say the least. Of course, there can be no certainty that certain phenotypic aspects, such as fur colouration, density, and texture, will be comparable to those of the dire wolf, because as far as I am aware there are no preserved dire wolf specimens in toto (as there are with woolly mammoths, conversely), only their skeletal components. Even so, it will be most interesting to monitor the progress of such a novel project - watch this space! 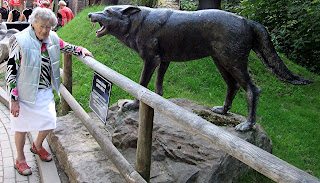 My mother Mary Shuker alongside a very realistic replica of a dire wolf, at Dinosaur Valley, Wookey Hole, in Somerset, England, on 29 August 2010 (© Dr Karl Shuker)