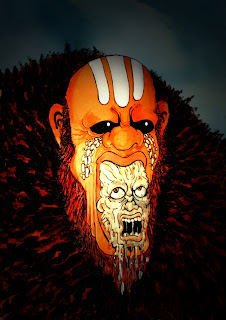 Also known as the yaroma, the yara-ma-yha-who is one of Australia's most feared supernatural entities, but it may also have a basis in reality, at least according to veteran cryptozoologist Dr Bernard Heuvelmans. For he speculated in his classic tome On the Track of Unknown Animals (1958) that perhaps it was inspired by ancient memories of southeast Asian tarsiers, those small but exclusively carnivorous, nocturnal primates with gargantuan orbs for eyes and weird superficially sucker-like finger-tips and toe-tips.

Heuvelmans deemed it possible that their unearthly, goblinesque appearance may have sufficiently impressed itself upon the native peoples whose descendants subsequently travelled to and settled in Australia, giving rise there to the aboriginal nations, for their collective memories, passed down from generation to generation Down Under, to have preserved a still-lingering version of it, distorted and embellished with lurid imaginings, ultimately yielding the nightmarish yara-ma-yha-who.

Whatever the explanation for it, however, the yara-ma-yha-who is truly terrifying, not only in appearance but also in activity, as now revealed here in my retelling of its traditional grisly behaviour upon encountering an unfortunate human.

Creatures of shadow come in many forms, but few are not only more monstrous in physical form but also more hideous in predatory behaviour than the horrific yara-ma-yha-who of the Australian bush, which is active during the daylight hours but lurks hidden in tall fig trees amid the concealing darkness encompassed by their burly overlapping branches. Here it sits, waiting…

Twilight had not yet fallen as the hunter walked down a long tree-fringed path leading towards his settlement just beyond the forest’s perimeter. Peering fearfully all around, he inwardly cursed himself for not having waited until the sun had set in the sky before journeying through this ill-omened place. For his people’s ancient lore warned of the terrors that dark, lonely locales concealed within their black hearts even during the span of daytime.

Shafts of sunlight filtered through the roof-like canopy of interspersed branches overhead, lighting the gloom below – and revealing a fairly large creature squatting on a sturdy branch just ahead. A koala, perhaps, or even a tree kangaroo? Gripping his spear, he moved closer, as the sunlight slowly transformed the entity from a featureless silhouette into a furry being that seemed to have scarlet skin.

Surely, though, reasoned the hunter, this abnormal hue was due merely to the fiery rays of the soon-to-be-setting sun falling upon it? He fervently hoped so, because the alternative was too terrifying even to contemplate. Fortunately, the creature was sitting with its back to him, so if he could just walk by softly, without attracting its attention, all would be well.

Unfortunately, his foot trod heavily upon a dry, shed twig, which snapped loudly in the evening stillness. Immediately, the creature turned, and as the hunter gazed up into that hideous visage, he knew without hesitation that it was already too late. Just as he had dreaded, what he had encountered was neither koala nor tree kangaroo but was, instead, a yara-ma-yha-who! 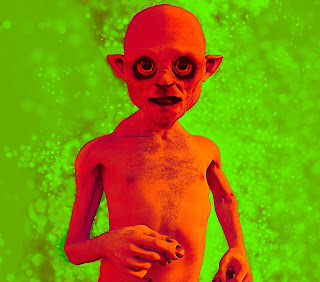 The eyes of this fiendish entity were enormous – twin globes of glowing evil that almost filled its entire face within its disproportionately large head. And as its hands stretched towards him, the doomed hunter observed with skin-crawling fascination that each of its long spindly fingers and toes bore a large flat sucker at its tip. Instantly, the yara-ma-yha-who leaped down upon the terrified hunter, knocking him onto the floor, its suckers pressed against his quivering body. And as he lay there, with this foul vampyric beast upon his chest, he could feel each sucker drawing blood from his body, draining him of his life-force.

That alone would have been more than enough horror to withstand, but the hunter knew from his people’s lore that there was even worse to come – much, much worse. Suddenly, when finally satiated with blood, the yara-ma-yha-who opened its wide toothless mouth - and, just like a snake, dislocated its jaws, so that its gaping maw now resembled an immense black cavern. Then, leaning forward, in a single enormous gulp it swallowed whole the hapless hunter, weak and paralysed with fear, but still living.

After executing a macabre dance designed solely to facilitate the movement of its engulfed human victim down its gullet into its distended stomach, the yara-ma-yha-who squatted back down...and waited. After a while, it opened its gigantic mouth again, and vomited forth its prey. Although hideously disfigured by the creature’s highly corrosive gastric juices, the hunter, incredibly, remained alive, but was somewhat smaller in size. When the yara-ma-yha-who saw this, it promptly swallowed him once more, then performed its bizarre dance of digestion.

This grotesque sequence of events was repeated several times, until finally, when vomited up yet again, the hunter, barely living but still breathing, was no bigger than the yara-ma-yha-who, and totally unrecognisable. When it inspected him this time, the yara-ma-yha-who seemed satisfied, and in an instant it had gone, leaping into a nearby tree – to await another victim.

What had formerly been the hunter, meanwhile, lay there on the ground as it gradually revived, its furry skin burnt scarlet from the yara-ma-yha-who’s metabolic acid. Then it raised itself up onto its haunches, its huge eyes blinking in the darkness, its suckered fingers twitching as if electrified. Soon, just like its creator, it would leap into a tree, to watch, and wait – a new yara-ma-yha-who, hungry for human blood and life-force, having already forgotten that it too had once been human. 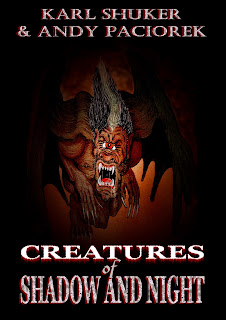