ON THE TRAIL OF NEW GUINEA'S STRIPED FELINE MYSTERY BEASTS 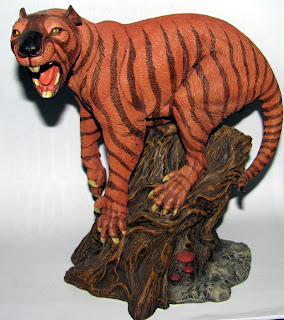 Spectacular figurine portraying the possible appearance in life of the Queensland tiger or yarri if real and constituting an extant species of thylacoleonid; owned by Australian cryptozoologist Rebecca Lang, it was created by Sean Cooper and constructed/painted by Jeff Johnson (© Rebecca Lang/Sean Cooper/Jeff Johnson)

There are no native marsupial or eutherian felids living in New Guinea – or are there?

The Queensland tiger or yarri is a large, striped, cat-headed mystery beast long claimed (but still not confirmed) to exist in this region of Australia, and some cryptozoological researchers have speculated that if it does indeed exist, this exceedingly elusive creature may conceivably be a living species of thylacoleonid or marsupial lion, officially believed to have become extinct many millennia ago (see my three mystery cat books for more details). Referring to this feline cryptid in their book The Wild Animals of Australasia (1926), Albert S. le Souef and Henry Burrell included the following tantalisingly brief snippet:

We have had a striped carnivorous animal described from Northwest Australia, and Lord Rothschild states, from native reports, that a similar animal exists also in New Guinea. 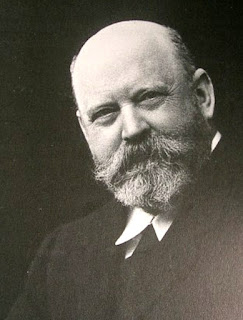 During the late 1800s and early 1900s, eminent British zoologist Lord Walter Rothschild FRS (1868-1937) amassed a truly immense personal museum of natural history specimens (the largest ever owned by a private individual), and he sponsored many naturalists and collectors to scour the world (including New Guinea's vast little-explored jungle realms) in search of more. These searches in turn led to the scientific discovery, and subsequent formal description by Rothschild, of many important new animal species. His museum subsequently formed the basis of what is now the Natural History Museum of Tring in Hertfordshire, England which is the repository of much of the vast collection of bird specimens owned by London's Natural History Museum.

Over the years, I've read a fair few of Rothschild's papers and books, but so far I have yet to uncover in any of his publications the source of the above-quoted information attributed to him by le Souef and Burrell. So if any reader happens to know this source, I'd be very grateful indeed to receive details.

Moreover, Rothschild's rumoured riddle is not the only feline cryptid (indeed, not even the only striped feline cryptid) reported from New Guinea. I know of at least two others, very different from one another morphologically, but equally memorable – albeit once again for very different reasons. 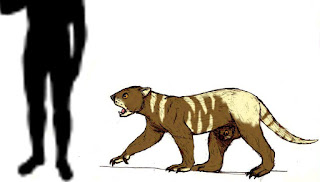 I documented the first of these latter two in my book Cats of Magic, Mythology, and Mystery (2012). On 11 November 2011, Australian cryptozoological researcher Malcolm Smith's internet blog, Malcolm's Musings, contained a fascinating post in which he reported that one of his neighbours, Esther Ingram, who had been born to missionary parents in New Guinea, once observed an apparent mystery cat at close range there when revisiting this great island mini-continent as an adult. Her sighting occurred one evening during December 1999/January 2000 at a distance of only 20 yards away when the creature emerged from some jungle and crossed the road ahead while she and her father were being driven by her foster-brother in the Eastern Highlands province of Papua New Guinea (PNG). According to Esther's description as recorded by Smith, the creature was:

…very solidly built, and the head-body length was about five feet. Both Esther and her father were amazed at how huge it was...Esther, in particular, made an attempt to study as many details as possible. (Remember, it was very close.) The basic colour was white, with ginger "trimmings" on the tail and ears. Pale gingery, vertical stripes, not terribly well delineated, appeared on the sides, but they did not extend to the back, or dorsal surface, which was completely pale. She specifically noted that the forepaws were cat‐like, rather than (say) hoofed like a goat's. She didn't get a glance at the rear paws. The tail was ginger and very long, hanging to the ground. I enquired about bushiness etc, to establish a comparison with a dog's. She said it was a bit coarser or fluffier than the body, but not much. On the body itself, the fur was smooth. The head was broad, short, flattish, and definitely cat-like. It did not protrude like a dog's. The ears were ginger, mottled with white, and hung down. They were not as long as a spaniel's, but they were definitely long and rounded, and gave every indication of being naturally floppy. It was this feature which amazed both of them (and me as well, as it doesn't sound anything like a cat's). Esther also thought she saw whiskers.

Very intrigued by Esther's account, Smith contacted Australian mammalogist Dr Tim Flannery, an expert on New Guinea fauna, and asked his opinion as to what she may have seen. Dr Flannery deemed it likely that her mystery beast had been a tree kangaroo, but Esther, born and raised in New Guinea and regularly returning there for visits as an adult, was very familiar with the appearance of such animals, and did not agree with this identification of the creature that she had seen. Could it have been the New Guinea version of the Queensland tiger as claimed by Rothschild? 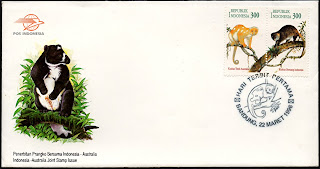 Issued jointly in 1996 by Indonesia and Australia, a philatelic First Day Cover featuring on its left-hand side an illustration of the dingiso – a very distinctive species of black-and-white tree kangaroo native to New Guinea's Indonesian western half, yet which remained undiscovered and undescribed by science until as recently as the 1990s (© Indonesian Postal Service/© Australian Postal Service – reproduced here on a strictly non-commercial Fair Use basis for educational/review purposes only)

With no known large-sized mammalian predators other than imported canine forms, such as the nowadays exceedingly rare New Guinea singing dog, ecologically speaking it would not be inconceivable for an elusive feline cryptid to thrive here, plentifully supplied with wallabies, tree kangaroos, possums, rodents, bird life, and other potential prey species. How ironic it would be if the Queensland tiger, or something very like it, was ultimately discovered not in Australia but instead in its more mysterious northern neighbour, New Guinea.

The third of this latter island's reported feline cryptids is more famous, but for all the wrong reasons. Supposedly referred to locally as the moolah, it is just one of several very remarkable beasts that were said to exist here by Captain J.A. Lawson in his notorious book Wanderings in the Interior of New Guinea (1875). According to Lawson, he had landed here in 1871, and among his truly extraordinary alleged discoveries were the world's highest mountain (dubbed by him Mount Hercules, and far taller than Everest, yet which could be climbed in just a day!), very large monkey-like ape-men, enormous herds of deer and buffalo numbering in their thousands, the world's tallest tree, flightless birds resembling ostriches or emus, and, his pièce de resistance, the moolah, a specimen of which he supposedly shot and which was ostensibly one and the same as India's Bengal tiger! Here is Lawson's description of his freshly-killed moolah:

This animal was formed exactly like the Indian tiger, nor was it inferior in size; but it was a much handsomer creature. It was marked with black and chestnut stripes, on a white, or nearly white, ground. Its length from the nose to the root of the tail was seven feet three inches. 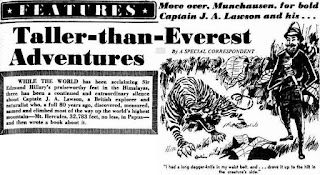 The opening headlines and accompanying sketch from an extensive article (click here to access it) recalling the Munchhausenesque history of Captain J.A. Lawson that appeared in Sydney's Sunday Herald newspaper on 23 August 1953 (© Sunday Herald, Sydney – reproduced here on a strictly non-commercial fair use basis for educational/review purposes only)

On fundamental zoogeographical grounds alone, however, Lawson's claims regarding the existence in New Guinea of the moolah and the other creatures listed above were arrant nonsense. Yet, incredibly, for some years afterwards they were widely accepted as gospel, until continued explorations of New Guinea finally confirmed the entire content of Lawson's book to be fictional – indeed, a veritable Munchausenesque satire on the whole concept of Victorian exploration – rather than anything remotely factual.

As for the true identity of the mysterious Captain himself, this has never been conclusively established. However, the most popular suggestion is that Lawson was actually Robert H. Armit (1844-?), a lieutenant in the Royal Navy with experience as an assistant surveyor in Australian waters, and later Honorary Secretary of the New Guinea Colonising Association.

In any event, for those of you who may have heard about Lawson's New Guinea tiger but not known of its history, you can at least rest assured now that there is no longer any need to mull over the moolah! 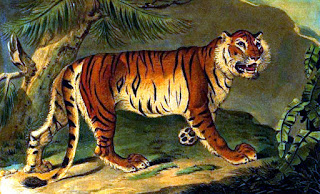